The Arctic isn't supposed to be the pole of the Earth with an ozone problem.

Yet this year, for the first time, seasonal ozone loss above the Earth's northern pole rivaled that of Antarctica. A NASA-led study published in the journal Nature shows the Arctic suffered an 80% ozone depletion in the part of the stratosphere where it's usually most abundant, between 18 and 20 kilometers altitude.

It's a big finding for two of NASA's Earth Observing Satellites, Aura and CALIPSO. Aura investigates the Earth's ozone system; CALIPSO provides data on aerosols and clouds. Images released by NASA show a dearth of ozone in mid-March 2011, along with a corresponding increase in its chemical nemesis, chlorine monoxide. 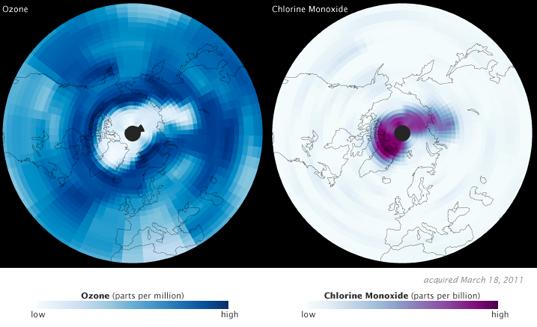 A rendering from data collected by the Aura satellite shows a large depletion of ozone above the Arctic in March 2011, along with an increase in chlorine monoxide.

To understand what happened in the Arctic circle this March requires a quick trip back to Chemistry 101. Ozone (O3) molecules are lost when chlorine (Cl) atoms bond with them, creating chlorine monoxide (ClO) and molecular oxygen (O2). That's why Aura saw such high levels of chlorine monoxide when ozone levels were at their lowest.

Chlorine atoms first arrive on the scene in the form of chlorofluorocarbons (CFCs) that were spewed into the atmosphere from propellants, aerosols, and refrigerants. CFCs aren't as common today as they used to be; we've been phasing them out since the 1980s. Unfortunately, they're long-lived once they get into the atmosphere. Ultraviolet light from the sun hits CFCs in the stratosphere, peeling off chlorine atoms. The chlorine isn't initially destructive; it will start by reacting with hydrogen, nitrogen and oxygen to create hydrochloric acid (HCl) and chlorine nitrate (ClNO3).

During the winter, areas within the Arctic circle experience long periods of twilight and darkness due to the tilt of Earth's rotation axis. The lack of sunlight creates some extreme weather. For instance, in Barrow, Alaska, one of the northernmost cities in the world, the average February temperature is a bone-chilling -27.1 degrees Celsius (-16.7 Fahrenheit) . A swirling mass of cold air called the polar vortex continually circulates, creating a gorgeous, shimmering phenomenon in the sky called polar stratospheric clouds. The polar stratospheric clouds become a breeding ground where hydrochloric acid and chlorine nitrate react to form chlorine gas (Cl2), setting the stage for trouble when spring arrives: the sun's warm rays split the chlorine gas molecules into free-roaming chlorine atoms, single and ready to mingle with ozone. 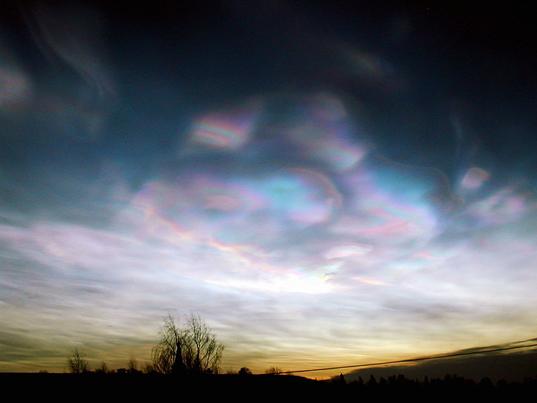 A polar stratospheric cloud above Asker, Norway. Such clouds are the breeding grounds for reactions that eventually result in ozone destruction.

So why was this year's ozone hole so large? It wasn't that it was colder than usual, but cold for longer than usual. Longer periods of cold sustain the chain of events that leads to chlorine atoms bonding with ozone, causing the havoc that Aura and CALIPSO saw from orbit.

The scientists who presented the findings aren't quite sure why this year was cold for a longer period of time than usual, but they know it's a bad sign. Future winters could be colder for longer, or just plain colder, meaning that the Arctic's seasonal ozone depletion could get worse. And unlike the Antarctic, there are populated areas within the Arctic circle.

So what becomes of our ozone byproduct, chlorine monoxide, that posed for Aura's sensors? Unfortunately, it can steal an oxygen atom from yet another ozone molecule, resulting in another free chlorine atom and two oxygen molecules. In theory, a single chlorine atom can perform this dance 100,000 times before it finds its way out of the upper atmosphere. Some chlorine will end up in hydrochloric acid and chlorine nitrate molecules again, only to start the ozone-destruction cycle all over again next winter on a polar stratospheric cloud.

And when that happens, Aura and CALIPSO will be watching.