I have just posted a timeline for Deep Impact's encounter with Hartley 2; I put it in the evergreen part of this website rather than in the blog because some of the details are likely to change before November 4 and I don't want to perpetuate errors!

At present, Deep Impact is imaging the comet once every five minutes with its medium- and high-resolution imagers. You might not recall that Deep Impact's highest-resolution camera suffers from a blurring problem (a fact that was very creatively taken advantage of for the spacecraft's reuse to hunt for transiting exoplanets), so the medium-resolution imager (MRI) is the one that is expected to produce the main publicity photos of Hartley 2, at least during the event. It will not resolve the comet's nucleus until an hour before closest approach on November 4, at which point the body, which is thought to be about 1.2 kilometers in diameter (and therefore one of the smaller bodies that's been visited by a spacecraft), should appear a modest 170 pixels across. The high-resolution imager might yield more details later, but only after time-consuming processing to cope with the blur. Between now and then, Deep Impact will examine Hartley 2's coma and watch it for outbursts and other changes as the comet passes through its perihelion, which happens on Wednesday.

The team is releasing an image roughly once a week right now, with the latest one being from October 1. Things have not changed much since their first image release, except that they are now subframing the images rather tightly around the comet, to only 256 pixels, in order to make room for more frequent images. (That means that the images are at their maximum possible resolution, but the spacecraft is only recording the center 25% of the pixels on its detector, which reduces its data volume by a factor of 16.) I haven't updated my approach animation recently because the animation doesn't really provide sensible information, since each image is stretched using different contrast and brightness settings before release. 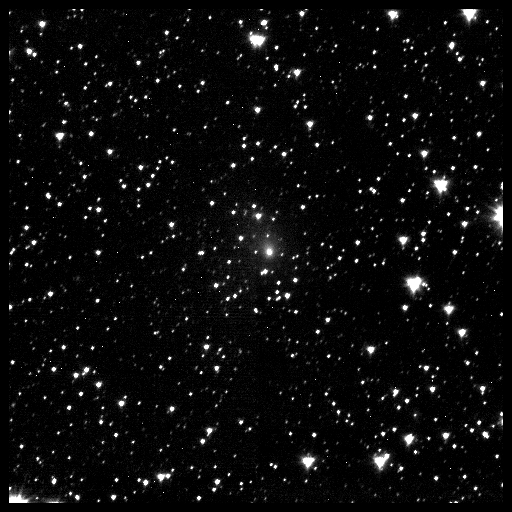 Deep Impact captured this photo of comet Hartley 2 at the beginning of its flyby campaign on September 5, 2010, from a distance of 60 million kilometers.