I debated whether to attend the Titan surface or near-Earth asteroids sessions on Friday morning and decided, in the end, to go to Titan, because I feel like I have just not been writing enough about Saturn's planet-like moon lately. I'm glad I did, because I got a good picture of the current status of Titan science. There's quite a lot of debate going on.

First up was Karl Mitchell, who works on Cassini's RADAR team and who has examined the question of whether Titan's northern lake district is actually a landscape of volcanic calderas. (For past writing on this, see here, from 2006, and here from later that year, and here, from 2007.) This time around, he was stepping back to evaluate the evidence from Cassini's RADAR instrument for and against cryovolcanism on Titan. He said that past work has kind of glossed over the fact that putative "cryolava" -- which is a fancy shmancy planetary scientist term for, um, water -- wouldn't actually be buoyant in Titan's crust, unlike melted rock on Earth. And then there's the recent notion that Titan is just "Callisto with weather," an undifferentiated moon that couldn't muster the primordial internal heat necessary to separate into ice and rock, much less power present-day volcanism. Karl showed that several spots that have been suggested to be lava flows, such as Winia Fluctus and Tui Regio, actually have negative topography when examined by RADAR (they're depressions, not constructed lava flows). And that since the so-called "calderas" are pretty strongly correlated with the presence of methane liquid, they're much more likely to have an origin as lakes or fluvial features than they are to be evidence of stalled, buoyant underground bodies of cryolava. Still, there are a few things for which a cryovolcanic origin seems more likely than other possibilities, including Hotei Arcus and Sotra Facula, which seems to have multiple lobate units a couple of hundred meters thick. He said to stay tuned to the American Geophysical Union meeting in the fall and attend Randy Kirk's talk on Sotra Facula, which has "the most spectacular topography I've seen" from Cassini.

Alice Le Gall showed that the Fensal and Belet dune regions on Titan appear different, probably because there are wider inter-dune spaces in Fensal than in Belet. And she said that RADAR emissivity data suggests the dune sands on Titan are mainly made of solid organics and not ice.

Lauren Wye showed a detailed analysis of RADAR images of Ontario Lacus. There were two observations, on T58 and T65. RADAR can basically see all the way to the bottom of Ontario; depending on the properties you assume for the liquid and the lake bottom, the lake isn't more than 3 to 7 meters deep. Reassuringly, her depth maps were deepest in the middle of the lake and shallowest at the edges. Unreassuringly, the shape of the lake bottom changed a little bit in the 6 months separating the two flybys. The waves on the surface of the lake can't be more than half a millimeter high -- that is one smooth lake. 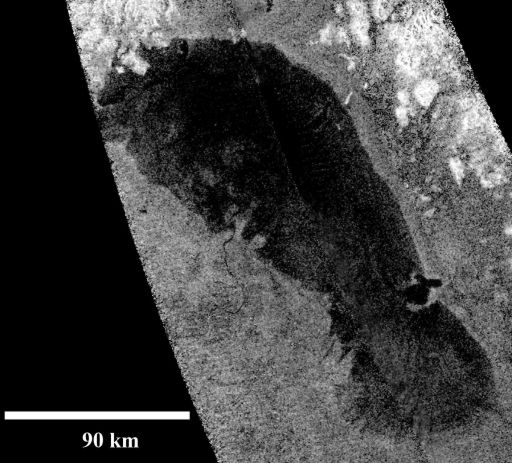 Ontario Lacus is the largest lake in Titan's southern hemisphere. This view of it was captured by the RADAR instrument on January 12, 2010. In the center left of the lake there is a visible dark channel running in to what seems to be a delta. The lake does not appear totally black because the radio waves actually penetrate through the liquid to the lake's bottom. To Cassini's cameras, the lake surface appears smooth and dark. 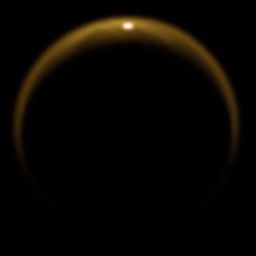 On July 8, 2009, Cassini finally saw the telltale glint of sunlight specularly reflecting off of the mirror-like surface of a lake on northern Titan. This image is from the VIMS instrument employing infrared light at a wavelength of 5 microns, and has been colorized to match visible-light pictures of Titan.

Feng Tian gave Owen Toon's talk, which is pretty easy and crazy to summarize: in the past, Titan was colder. Cold enough for nitrogen to condense as a liquid. And if there was enough methane around, more than 21% in the nitrogen lakes, it would freeze. Methane ice is less dense than liquid nitrogen, so Titan would have had methane-nitrogen seas with methane icebergs. Nutty.

Jeff Moore always likes to create trouble. He argued that Hotei Arcus is not, in fact, a site of Titanian cryovolcanism. The bright thing seen there is actually a depression, so now people are saying that the dark things are the lava flows. In fact, Jeff argued, the whole of Hotei Arcus is the lowest-lying topography around; it may be an old, degraded impact basin. High-resolution RADAR topography reveals that the brightest things in it are actually pits. He suggested that Hotei may be a region of dry lake beds. Then he showed a high-res radar image of Hotei next to an image of the dry lakes in Titan's north, and I have to agree that they were morphologically similar. However, one reason Hotei is picked out as a possible site of cryovolcanism is that it is really unusually bright in VIMS' 5-micron wavelength, and Jeff didn't have a good explanation for that. And of course if you don't have cryovolcanism, you can't explain Titan's methane-rich atmosphere.

Then Caitlin Griffith showed some detailed analysis of VIMS images taken near the Huygens landing site. She looked at a few anomalously dark pixels in her images, about 20 pixels' worth, and made the case that they are in fact totally black to VIMS -- that their only brightness comes from atmospheric scattering of light. She said that the best way to explain these totally black pixels is with liquid over a meter deep. Unfortunately there are no RADAR images over these black pixels. Slightly brighter pixels appear to be sand dunes. She showed pictures of Namibian sand dunes on Earth that are, in fact, interspersed with lakes, and suggested we're seeing some liquid seeping from underneath the sand surface -- "maybe we've finally detected a source of methane on Titan." Jason Barnes got up after her talk and said "This is good work, but to be honest I think it's wrong." He said there's just a continuous sea of sand. Caitlin countered that these are truly tiny areas of liquid, very isolated regions, and that their properties to VIMS are very different to other interdune areas. Barnes said she was still wrong.

So there you have it -- one Titan session at DPS. Cool results, but lots of inconclusiveness. Good thing Cassini's going to be there for six or seven more years!

I am going to try to get more notes from DPS written up, but have to warn readers that I am taking next week off to go help out some family; whatever doesn't get written up this weekend is going to have to wait for another week! 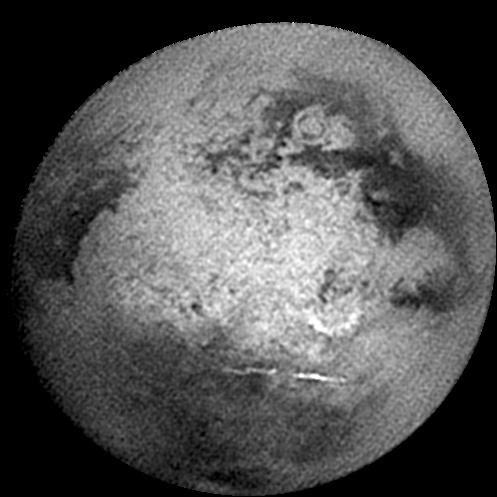 Hotei Arcus was visible in some of Cassini's earliest images of Titan, like this one captured by Cassini as it approached for the December 10, 2004 flyby. Hotei is the semicircle just below and to the right of center. Below hotei is a streak of methane cloud. Xanadu occupies the whole center of the visible disk. The concentric structure of the multi-ringed impact basin Menrva is visible near the upper center.