Here's a post with some random facts and notes from Monday at Division of Planetary Sciences meeting that didn't fit in any other writeup.

Iapetus has a much larger opposition surge than any other Saturnian moon (or Uranian moon, for that matter). If you're taking notes, Iapetus' is 1.8; next highest is Ariel, at 1.2. But binary Kuiper belt objects have much higher opposition surges at 2.1. Thomson Fisher et al. interpret this as evidence for the movement of ice around Iapetus' surface, which is redeposited as lacy frost that generates this opposition surge.

James Bauer, speaking about WISE's views of comets, said they detected 93 and discovered 19, including 3 cases of activity on known bodies. He referred to comet 67P/Churyumov-Gerasimenko, the eventual target of Rosetta, as "Cherry Gary." He said they got 18 frames on Deep Impact's target, Hartley 2, in mid-May. Here's one of those. 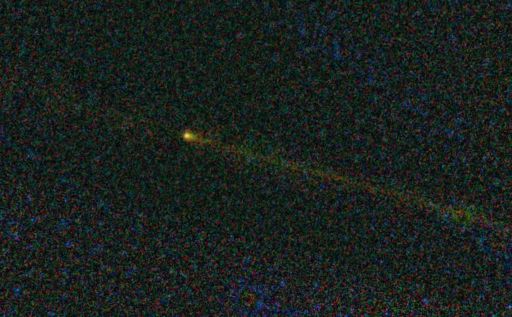 An infrared image of the comet 103P/Hartley taken by WISE May 10, 2010, shows the comet's dust trail, which streaks behind it in its orbit. Its gas tail is also faintly visible as a blob just to the right of the brightest part of the comet, its coma. This view covers 1.8 million kilometers of the dust trail.

Roger Clark showed some really remarkably good model fits to "squiggly lines" (spectra) measured for Saturn's icy moons using only three components: water ice, hydrated hematite, and nanophase iron. Bill McKinnon asked him "where did the carbon go?" Clark answered that it's probably present, just not optically abundant. I think the crowd was really surprised at just these three components being able to match the spectral shapes so amazingly well.

Matija Cuk argued that the impact spike in the lunar cratering record observed at 3.9 billion years ago -- the Late Heavy Bombardment -- could be explained from the tidal disruption of a Vesta-sized, Mars-crossing rocky asteroid, the parent of the "mesosiderite" meteorites.

Rita Schultz, summarizing Rosetta's Steins encounter, said that YORP effects are causing material to slide toward Steins' equator, erasing smaller craters. She tried not to reveal too much about the Lutetia encounter. She did say that Lutetia had an 800-meter-thick regolith over a more solid interior -- like the Moon. And she wouldn't cite a number for the density but she said "the density is such that it could be differentiated." A poster I saw on Tuesday said the density was 3.1 grams per cubic centimeter, which is about the density of a pretty dense rock like basalt; considering it's a small asteroid and likely has at least some void space, I assume that implies a rock and metal mixture.

Ray Arvidson's presentation on current Mars science duplicated a lot of the stuff I saw him present just the week previously at the Curiosity landing site selection meeting. He did say that "we think Spirit is alive, scrounging every photon to keep its battery alive," and that he expects the rover to wake up "in October."

That's when I left Day 1. At this rate it'll be the end of October before I get all my notes down in the blog!