Chandrayaan-1 was launched on October 22, 2008 and had been intended to conduct a two-year primary mission. During 312 days at the Moon it orbited more than 3,400 times and returned more than 70,000 images, plus other data. More than half of its instruments were provided by (or in cooperation with) ESA and NASA; several were copies of those on ESA's SMART-1, and one was a duplicate of the Mini-SAR instrument now in orbit on NASA's Lunar Reconnaissance Orbiter. ISRO has posted some images and data from the mission here.

An obvious question seems to be: why did ISRO give up so quickly? It's been less than two days since the loss of contact. I don't have an answer for that.

Many thanks to Svetoslav Alexandrov for the tip and links to Indian news stories. 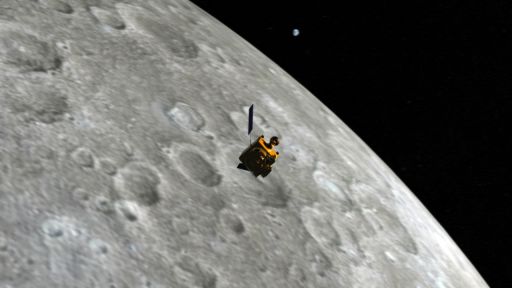 This is a still from an animation showing how the C1XS X-ray camera on India's Chandrayaan-1 spacecraft used solar X-rays to map the lunar surface. A high-definition version of the animation is available here (Quicktime format, 82.1 MB). Other formats are available here.