I'm a big fan of the Daily Show and Colbert Report so of course I made a note on my calendar not to miss Stephen Colbert's video statement on the occasion of the launch of COLBERT, the treadmill that NASA's naming for him in order to save a little face after Colbert was so successful with his only half-joking write-in campaign to get Node 3 of the International Space Station named after himself. As a public service, I am hereby posting the text of Colbert's statement.

Greetings NASA, it's me, Stephen Colbert. I want to congratulate you on a great year. The dramatic pictures from Cassini, finding water on Mars, and your dramatic discovery of a new administration that believes in science. Though I urge you never to give up on President Bush's bold challenge: 'Before this decade is out, we must launch a probe to find out if there's oil in heaven!'

"It's been a great year for me too. I of course was the winner of your online node-naming competition. Despite me coming in first place in the popular vote, you named the node Tranquility. Yeah. That'll scare the aliens! They're not going to mess with Earth now! We might get all relaxed at them!

But I was still honored to receive the traditional NASA consolation prize, a space treadmill. I couldn't be prouder that my treadmill will soon be installed on the international space station to finally slim down all those chubby astronauts. Let's face it, being weightless is mostly just a desperate bid to keep away from that bathroom scale every morning. But you guys and gals are ambassadors to the universe! Don't make us look bad! Put down the astronaut ice cream, tubby! Tubby, tubby, two-by-four, couldn't fit through the airlock door! It's Buzz Aldrin, not Butt Aldrin! So hit the Combined Operational Load Bearing External Resistance Treadmill or COLBERT, but remember to stretch out first. Because in space, no one can hear you pull a hammy.

In closing, I just want to say we're all huge fans here, and it has been a true honor to make merciless fun of you this year. Now, this is Stephen Colbert saying, I am go to launch me. LET'S LIGHT THIS CANDLE!" 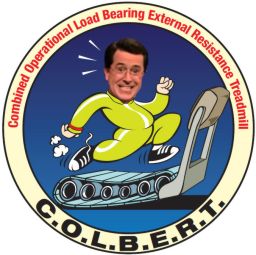 The COLBERT is the Combined Operational Load Bearing External Resistance Treadmill, set to launch to space in August 2009.