Last week, NASA's 36-year-old ISEE-3 spacecraft swung by its home planet for the first time in more than three decades. All but left for dead, the vintage explorer has been revived by the ISEE-3 Reboot Project, a crowdfunded effort to have the spacecraft collect scientific data again. The project team successfully gained control of the spacecraft back in June. The original plan was to send the spacecraft back to a halo orbit around L1, a gravitationally stable spot between the Earth and sun. But after a few thruster puffs to increase ISEE-3's spin rate, the thrusters stopped working—likely due to a lack of nitrogen used to pressurize the fuel system.

So instead of heading to L1, ISEE-3 cruised gracefully past the Earth and moon, continuing onward into its 355-day orbit, gradually pulling away from us. But the spacecraft is silent no more. As promised, the reboot team has commanded ISEE-3 to begin sending home science data from its working instruments.

Those data have a new Internet home, where they can be downloaded for free by citizen scientists. Google and the ISEE-3 Reboot Project have announced a new website, called "A Spacecraft for All." It's part-interactive documentary and part-data portal—and altogether pretty impressive. The website was built by Google Creative Lab, which brings together "writers, designers, filmmakers, technologists, and wild cards," according to its website. NASAWatch.com editor Keith Cowing, who leads the ISEE-3 Reboot Project with Skycorp CEO Dennis Wingo, said Google was interested in telling ISEE-3's story from early on. 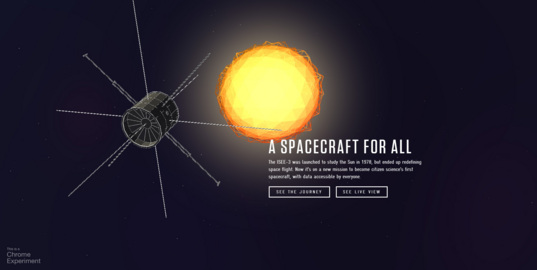 A Spacecraft for All

"A Spacecraft for All" is part-interactive documentary and part-data portal for ISEE-3 citizen scientists.

"A Spacecraft for All" caught my attention because I'm interested in how space stories presented using immersive web design can reach audiences outside the space community. I've previously praised The Washington Post's "Destination Unknown," and the Houston Chronicle's "Adrift" for trying this format. Just recently, National Geographic released "The Hunt for Life beyond Earth," another great example. At The Planetary Society, I'm leading an effort to develop something similar for our LightSail spacecraft project.

Whether or not sites like these succeed all comes down to execution. A beautiful design and solid narrative can all be for naught if the page feels clunky, or if the multimedia elements detract from the story. "A Spacecraft for All" makes none of these mistakes. It's ambitious, and far more innovative than my previous examples—yet the design is smooth and the presentation seems to have been carefully considered. And since ISEE-3 is a feel-good space story, the website promotes the wonder of space exploration, which is ultimately positive for the space community.

The site is built with WebGL, which allows for hardware-accelerated graphics to be played in a browser without additional plugins (read: Flash). It's designed for Chrome, but also works in other browsers (including Internet Explorer 9, although the performance is sluggish). The site is responsive and scales down nicely on my Nexus 7 tablet.

"A Spacecraft for All" has two main sections: a journey view and a live view. Let's start with the journey view.

A series of full-screen videos chronicles the spacecraft's journey from its 1978 launch to its 1982 comet-chasing conversion. We follow the probe's story all the way through its shutdown and eventual rescue. Throughout the videos—which tell the story in chronological order—the spacecraft's current orbital path appears, creating multicolor spirals that loop and twist. You can manipulate the viewing angle while the videos continue to play.

Here's an example. In this segment, Bob Farquar and David Dunham describe how they commanded ISEE-3 to spiral away from its L1 halo orbit into a heliocentric journey that took the spacecraft through the tail of comet Giacobini-Zinner. The interview shot was framed so that the orbital overlay doesn't cover the subjects' faces. 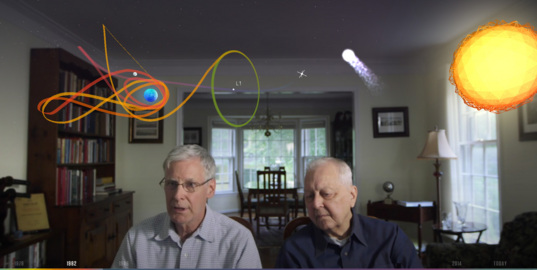 ISEE-3 heads for a comet

In this screenshot from "A Spacecraft for All," Bob Farquar and David Dunham describe how ISEE-3 left its halo orbit at L1 for a flyby of comet Giacobini-Zinner.

The content of the videos is compelling, and gives depth to the spacecraft's vintage appeal. I particularly enjoyed seeing Tom Brokaw describe ISEE-3's Giacobini-Zinner encounter during the NBC Nightly News clip. I was also glad the producers included shots of the spacecraft's launch atop a Delta rocket (although many space fans will recognize that the countdown audio actually belongs to Apollo 11).

The ISEE-3 Reboot Project team is also well-represented in the videos. We experience their excitement after they make first contact with the spacecraft at Arecibo Observatory. Later, their disappointment is palpable when the thrusters won't cooperate during a segment filmed at the project's McMoons headquarters. The videos end as the spacecraft enters "science mode" and begins sending data back to Earth.

On the opening screen of the live view, we see the spacecraft's current position and it's real-time distance from Earth, moon and the sun. There are ribbon trails to show you where ISEE-3 is and where it's heading, just like in the videos.

The data section has a dashboard displaying the spacecraft's vital signs, which include solar array current, temperature and spin rate. The information is based on the spacecraft's last "sync"—as of this article the dashboard is 13 days old. Keith Cowing said a procedure is still being worked out on how to process inbound spacecraft data so it can be accessed via the dashboard. Right now there are two satellite dishes set up to capture telemetry from ISEE-3: one at Morehead State University in Kentucky, and another at AMSAT-DL in Germany. Cowing said he hopes to secure more collaborators around the globe. 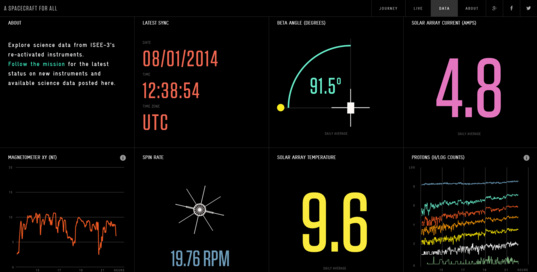 New science data from ISEE-3 will be published on a data dashboard, and made available for anyone to download.

There are also dashboard slots ready for magnetometer readings and low-energy proton counts. Neither contain any data yet, but Cowing said they should be there soon. Eventually, the team hopes to include data from 5 or 6 of ISEE-3's original 13 science instruments—the half-dozen that are still working after three decades in space. Preliminary readings from ISEE-3's plasma wave receiver show the spacecraft detected a solar flare, and the timing of the event was correlated with observations made by a GOES weather satellite.

It will be interesting to see what citizen scientists are able to do with ISEE-3 data. "A Spacecraft for All" is a fitting website for a 36-year-old spacecraft brought back to life by the sheer will of enthusiastic space fans. Anyone is welcome to join the ride as the versatile explorer begins another long trek around the sun.