Since I have an intellectual and professional passion for high resolution optical systems that travel to other worlds, I'm excited by Thursday's anticipated launch of the Lunar Reconnaissance Orbiter and its complement of instruments, including the Lunar Reconnaissance Orbiter Camera (LROC) that will capture select portions of the Moon's surface at 0.5-meter resolution.

On Monday I wrote about the gravity issues that can affect high-resolution imagers, and the photos I included may have left you with the impression that all high-resolution optical systems that are launched into space are very large pieces of hardware. Below are photos of the LROC NAC and WAC. 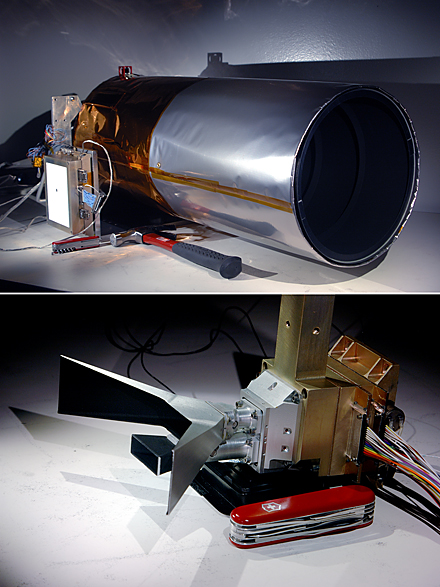 MRO orbits Mars at about 300km altitude, and as such stays above the atmosphere which, while very thin and tenuous, is sufficient to slow the spacecraft at low enough altitudes. In fact, the atmosphere was useful in that respect--MRO's orbit was circularized on arrival at Mars by dipping into the Martian atmosphere over the course of 550 orbits with a minimum altitude of about 100km. But the Moon's lack of atmosphere allows LRO to zip over the surface at half that altitude. The LROC NAC cameras can have a lower angular resolution and still acheive comparable spatial resolution because the objects they are imaging are so much closer.

The LROC cameras derive heritage from similar instruments also built by Malin Space Science Systems, currently aboard MRO. The WAC derives heritage from the Mars Color Imager (MARCI) and the NAC from the Context Camera (CTX). On MRO, MARCI and CTX provide lower-resolution, wider-field images. As an engineer, though, I understand the meaning of heritage--it means "We only had to change a few thousand things."

When it comes to images from other worlds, I'm familiar with the profound sense of awe and inspiration that a handful of pixels can produce. I had the good fortune to work assembling and testing the Pancam Mast Assemblies for both Mars Rovers, as well as the HiRISE imager. The much-published image of Victoria Crater with the Opportunity Rover at its edge was very rewarding and professionally satisfying for me--a piece of hardware I built was taking a picture from orbit of another piece of hardware I built on another planet! One of the products that will come out of the LROC will be images of the Apollo hardware left there 40 years ago. LROC will not only provide site certification, morphology, topography, and mapping, but I expect a little thrill of involuntary nostalgia and reverie (reminiscent of the madeleines in Proust's Remembrance of Things Past) when I view those small bunches of pixels showing the Apollo LEMs.

Much more has been written on the mission objectives, specifications, and details of LROC and LRO than I can summarize here--some excellent web resources detailing LROC are the LROC page at Malin Space Science Systems, an extended abstract (PDF) from the Lunar and Planetary Institute, Houston, TX, and a specifications page from Arizona State University. Information about all of LRO's instruments and mission objectives can be found at LRO Overview: The Instrument Suite and Mission (PDF) and an excellent article from Herbert J. Kramer's Observation of the Earth and its Environment.