My New Horizons boss Alan Stern blogged about the New Horizons Pluto encounter planning a couple of weeks ago. He gave the high-level view of why we are planning the encounter now, six years before we reach Pluto, and how we translate our science goals into specific observations. So here I'll dive into the details a bit further.

We've been planning the encounter for about 18 months now, under the tireless leadership of our Pluto Encounter Planning leader, Leslie Young. There's been a lot of haggling over the details (mostly very good-natured, though we'll never let Leslie forget the time she stood on a chair to make a particularly emphatic point), and a lot of hard detail work, and now we have a nearly final timeline for the encounter. It looks more-or-less like this: 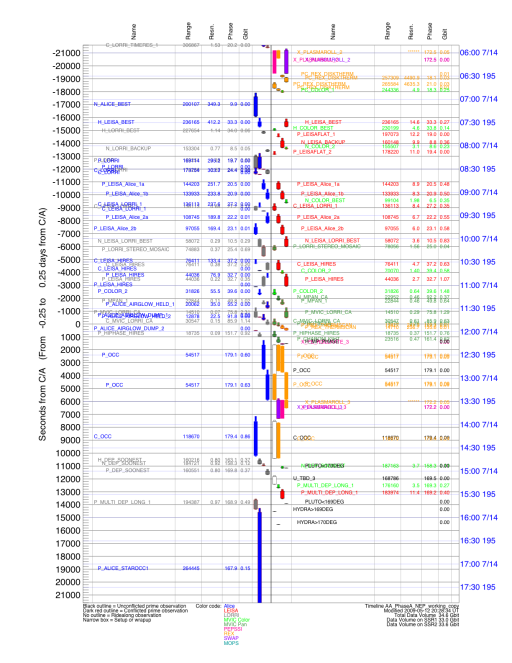 
his graphic is one of the many tools we've been using to visualize the New Horizons Pluto encounter during the planning process. It shows the planned spacecraft activities for the 12 hours centered on Pluto closest approach, which is at 11:50 Universal Time on Bastille Day, July 14th, 2015. Times are given in blue on the right-hand side. Each vertical bar represents the time and duration of an observation, with the colors representing different instruments. Blue is the Alice ultraviolet instrument, gray is the LORRI telephoto camera, red is the LEISA infrared spectrograph, green is the MVIC multicolor camera, and yellow is the REX radio science instrument. Sometimes more than one instrument is operating at once. Beside each observation is its name (the initial letter identifies the target, so "P" is for Pluto, "C" is for Charon, "N" is for Nix, and "H" is for Hydra), and numbers give the distance to the target, the resolution in kilometers, the solar phase angle, and the estimated amount of data that will be taken, in Gigabits.

Here's one of the observations we'll be particularly looking forward to- a high-resolution mosaic of Pluto with LORRI (the Long-Range Reconnaissance Imager, our workhorse telephoto camera) which will give us one of our best (400 meters per pixel) regional views of Pluto's geology, about 90 minutes before closest approach. The observation is called P_LORRI_STEREO_MOSAIC because one of its main purposes will be to give us a stereo view of the landscape when combined with other views of the surface taken from different angles. 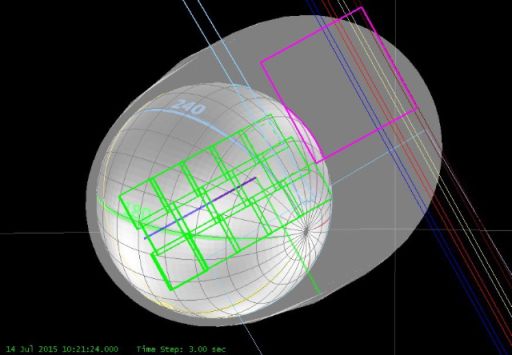 
he array of green squares show the footprints of the LORRI camera during the planned "P_LORRI_STEREO_MOSAIC" observation of Pluto. The other colored boxes show the fields of view of other New Horizons instruments. The grey oval shows all the places where Pluto might be, as described in the text- the globe shows just one possible location.

We now know when these observations will be taken, the exposure times we'll use, and how they will be stored on the spacecraft. What we don't know is what the images will actually show- it boggles the mind to imagine that. The P_LORRI_STEREO_MOSAIC images will be about as good as the best images Voyager 2 obtained of Triton 20 years ago in 1989, and those images were completely bizarre. I'm sure Pluto will be equally bizarre, but in its own unique way. 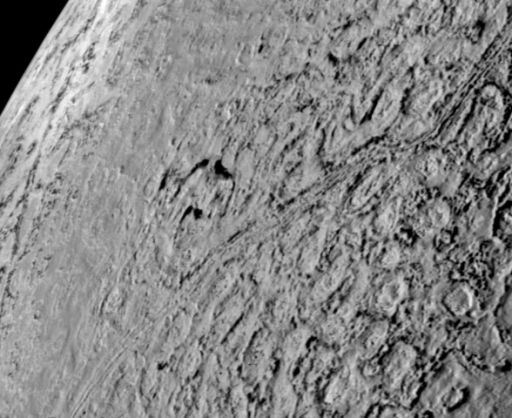 
oyager 2's highest resolution view of Triton, taken during its Neptune flyby in 1989. New Horizons' best images of Pluto will be about four times more detailed.

The trouble is that Charon's light is never very bright at all. In fact it's ridiculously faint- if you tried to walk around in Charon-light, you'd keep bumping into things. At the most, we expect Charon's light to be more than 10,000 times fainter than sunlight, and even sunlight, at Pluto's distance from the sun, is only about as bright as the tasteful lighting you might use in your living room in the evening. So to see those moonlit snowfields we need long exposures: 3 minutes is about the minimum that's useful. If we tried to take a single 3-minute exposure, though, two bad things would happen. First, the photo would suffer horrible camera-shake, because we can't hold the spacecraft steady enough for a sharp photo for more than half a second or so. Second, it would be completely overexposed, because the best time to look at the night side is when we are looking back at Pluto after our flyby, and at that time Pluto is only about 13 degrees from the Sun, less than the width of an outstretched hand. Sunlight will be flooding the inside of the camera, and everything we look at will be seen through a bright wash of background light. This stray light alone will be 1000 times brighter than Pluto's night side, and will overexpose the camera in a few seconds. We know just how bright the stray sunlight will be, because we've already taken test exposures on the spacecraft, in the same orientation. So instead of one 3-minute exposure we will take about 360 half-second exposures, which we will add together once they've been sent back to Earth. We will also need to take 360 exposures of blank sky, with the sun shining into the camera at exactly the same angle as for the Pluto images, so we can subtract away all that stray light.

There are even more complications. Not only the sun, but the bright sunlit crescent of Pluto itself, will be scattering light inside the camera. By changing the spacecraft pointing slightly, we can change the position of that scattered light pattern relative to Pluto, and, we hope, subtract away that too.

There are lots of details like this, but we're down to checking off the last few. We're having a meeting in Boulder this week in which we are putting the final seal of approval on many of our observation designs, and by late summer we expect to have the entire close approach period finalized. There will still be a lot of testing to do, and lots more work for the flight team, but we scientists will have completed the bulk of our work. That is, until we finally have Pluto in our sights, and all these plans start turning into reality.Plug of the Day
t's amazing what amateurs are doing with planetary images these days. Using calibrated data archived in the Planetary Data System, or even the preliminary raw images posted on the Cassini or MER web sites, they are generating color images and mosaics that eclipse in detail and sheer beauty the best that professionals could have produced a decade ago. One of the finest practitioners of planetary image digital magic at the moment is Croatia's Gordan Ugarkovic. Check out his Flickr page and be amazed.