Ok, that's a bit of an exaggeration. I just saw the new Star Trek movie. What Kepler is actually seeking out is Earth-like worlds. Places where we could at least imagine that there might be green babes. Through incredibly clever observations we have found many planets around other stars, but they are all much larger than Earth. Obviously you'd find the bigger ones first. Kepler is our first good shot at finding planets more like our home world.

The news is that today Kepler, which was launched about two months ago, has finished its commissioning phase and has begun its three and half year mission. Too bad they couldn't make it five years, to complete the Star Trek analogy.

Kepler is a space telescope (this sure is the week for those) designed to stare at a particular star-rich portion of the sky and look for tiny changes in the brightness of the stars that would be caused by planets around those stars crossing in front. By observing these changes multiple times, they can be identified as being the result of a planet and not some other variation, and tell us the period of the orbit and the size of the planet. We can then not only find planets the size of Earth, but possibly identify those that are in a habitable zone around their star.

Once we find them, then what? Later planet-finding missions on the drawing boards will be able to look at the planets directly when they're not in front of their stars, and try to get some spectral information about whether they have an atmosphere and what's in it.
t would be amazing someday to find an Earth-like planet out there with a nitrogen and oxygen atmosphere.

Of course before that we will immediately be faced with the very important task of naming these Earth-like worlds! Our neighboring Earth's will definitely deserve their own names. Like Vulcan. 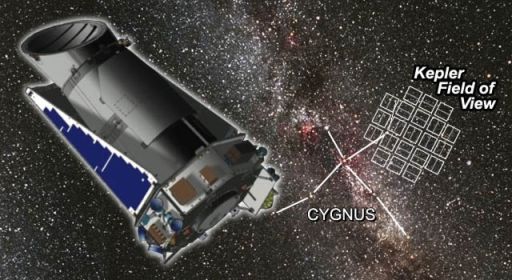 
rtist concept of Kepler in space.