Thanks to Ted Stryk for contributing the following notes on Friday morning's session on upcoming and future missions at the Lunar and Planetary Science Conference. --ESL

Michael Meyer spoke about MSL, saying it has greater potential for astrobiology given recent discoveries. The next decade will get hit with the effects of MSL's cost overruns. Goals after MSL are: Maven [Scout mission orbiter], one small rover (besides ExoMars), and network landers, while "banking" money for Sample Return. Future Mars exploration will depend on international cooperation. 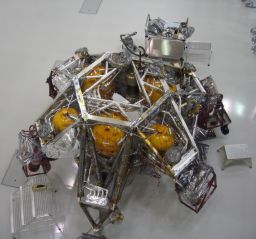 The workforce has gone from 700 full-time equivalents (1500 total individuals) down to 300 total (no breakdown on full-time/part-time given). Ten major instruments plus some small ones on the heat shield all still there. MastCam will no longer be a stereo camera like Pancam. Instead, one eye will be wide angle, the other narrow angle. Navcam will also be stereo. However, the NAC frames can be mosaicked to make stereo pairs. Six of 10 instruments already delivered. Sampling drill has two spare bits in case anything breaks. The descent aeroshell is the biggest EVER built, including the Apollo return aeroshells!!! Descent stage is fully completed. Two trajectories are being studied, which may affect site selection. Arrival will be in Ls 150-170 (late southern winter). There will be a call for new sites utilizing new data; if any beat the four candidates significantly, they could be selected. Final site selection will be about six months before launch.

Horton Newsom spoke about testing an MSL-like rover at Devon Island. Haughton crater is being used for simulations. They're using MSL-like instruments to study Haughton Crater in order to get some field experience and ground-truth.

Agustin Chicarro presented on MarsNext, an ESA network lander mission to follow ExoMars. Chicarro remarked that ExoMars has become like a "Christmas tree with ornaments" -- 23 major instruments! -- which is why it is being descoped. MarsNext will be in the Exploration program of ESA, not the science program, meaning that it must include testing technologies. It is planned to include an orbiter and network landers equipped with a seismometer, meteorological instruments, radio science, CO2 cycles[?], imaging system, and a "mole" to study below the surface; science payload on each lander would be ~8kg. Orbiter would aerobrake, build on Mars Global Surveyor heritage by doing crustal magnetic studies during close passes during aerobraking. It would do other science later, also serve as relay. Network would include at least three but preferably four stations. Entry mass would be larger than Beagle 2, 125kg to 140kg -- studies are being done to allow a 20% mass margin in case something has to be done. Landers look Beagle-like. Orbiter would also do tests to prepare for Mars Sample Return. A 2020 launch is being proposed. "Even if you send 100 rovers to Mars, you will not gain some of the global understanding that can be obtained through a network lander mission."

Bruce Banerdt presented Cerberus, a Mars geophysical mission -- which just got cut from New Frontiers consideration by JPL last week, so it is dead in the water. It would have used three Phoenix clones to form a network. Disadvantage of that architecture is it's major overkill in terms of what they need for the science, but advantage is that it's a proven system. (Banerdt seemed near tears as he presented it, all in the past tense -- it's sad, although this proposal is so much more expensive than mission designs with similar capabilities that it would be cheaper to fail and try again, making the advantage of a proven but expensive and more complex than intended system is lost, if it ever existed.)

There followed a presentation on a proposed mission called SHOTPUT by Andrew Klesh. It's an interesting asteroid flyby/sample return mission idea for 2015 with a great instrument suite. It could fly by 2001 HM10 (a main belt asteroid) in 2016 for calibration of instruments, release impactor, and collect samples (Stardust type but lofted by impactor), return in 2018 Earth flyby, release samples. It'd follow up with a Hektor encounter in 2020 (Hektor is a binary Trojan with a companion). Again it'd release an impactor, then fly by, slew to study whole flyby. In 2022 it could encounter Oterma (an active Centaur), with science similar to Hektor. Sampling would be done at 2001HM10 because orbit would not allow return to earth after Oterma before 2037. Tungsten impactor instead of copper. No explanation why, even when questioned (explained why Tungsten would work, but not why it was chosen). No clear means for funding. Solar powered. No clear source for funding. Considered as both New Frontiers and Discovery proposal.

Tony Colaprete talked about LCROSS. The mission was devised to try to directly detect buried hydrogen at poles. Its primary goal is to understand hydrogen as a resource. Also, to study regolith grain size and distribution of hydrogen within regolith. Study of regolith kicked up by the LCROSS impactor will be the first direct studies of this area -- can compare to lander sites. It will study if the distribution of hydrogen is "smooth or chunky," that is if it's evenly distributed or spotty. If localized, it will have either stronger or weaker than expected levels. If the abundance is as expected (based on low resolution Lunar Prospector maps) -- that is, if the single point measurement matches the regional average -- then it's probably smooth distribution. Five days after launch, it will have a lunar swingby, then vent fuel from the Centaur rocket - Then in Earth orbit for a 3 ½-month cruise, setting orbit up for a steep impact angle that couldn't be achieved from lunar orbit. Then separate from Centaur and impact. They expect a crater 20-30 meters in diameter, if regolith properties are similar to previously studied areas. LCROSS is ready to go! Ground-based and Earth orbiting observations planned. Centered on Hawaii for Mauna Kea observations, Will be visible from U.S. although low for those in the east. Not visible from Europe and Asia. Mission has only been in development since 2006 and had a 79-million-dollar cap, and it's on budget! They hope to use the last shreds of fuel for shepherding satellite to speed up final impact, but this is not yet approved. Centaur is highly accurate, but they are looking for an interesting place for the shepherding satellite (the one that will observe the centaur) impact because of 3-kilometer targeting uncertainty.

Greg Delory spoke about the upcoming LADEE mission. It'll study the lunar atmosphere and electrostatically lofted dust, and will also test optical transmission of data. This talk was interrupted by major thunder from outside... It will try to get back to a Pathfinder / Lunar Prospector approach, a small mission. Launch on Minotaur. Finally settle Gene Cernan's "streamers" he claimed to see out the window. It's a great chance to study it before new human exploration significantly alters it. The two Artemis spacecraft that will study Earth's auroras will be conducting lunar swingbys to get into the correct orbits. During lunar swingbys, they will conduct complimentary science and also aid calibration.

The next talk covered the proposed Lunar Occultation Observer, which would use lunar occultations to create high-resolution hard x-ray and gamma ray sky surveys. Using the Moon as a science outpost is the only connection of this to lunar and planetary science.

Alan Smith spoke on the proposed British MoonLITE mission. Four penetrators would create a geophysical network, and there would be a polar orbiting geophysical orbiter. Impact tests in sand were done in Wales in May 2008 to prove basic feasibility. Tests worked well despite accidentally hitting a steel beam on the first two tests at 700 mph! (yes, mph, not kph). The U.K. has begun a Phase A study as of December 2008, in collaboration with NASA. Phase A will take nine months. UK MoonLITE Consortium is leading the study.

Bob Pappalardo presented on the jointly selected Europa Jupiter System Mission or EJSM. "In this mission, 1+1=3 because of the synergistic potential. Launch in less than a Jovian year, 2020. There would be a 2-3 year Cassini like study by both spacecraft [a NASA-built Jupiter Europa Orbiter or JEO, and an ESA built Jupiter Ganymede Orbiter or JGO]. JEO will study Europa's habitability. It should be able to measure the thickness of, and what processes might be going on inside, Europa's ice shell. Conservative payload because it will absorb 2-3 times what Galileo absorbed (actually absorbed, not planned dosage) so it will have unique instruments compared to earlier mission. Instrument workshops will be in July. Before Europa orbit, JEO would have 3 Io flybys, 6 Europa flybys, 6 Ganymede flybys, 9 Callisto flybys. JGO would have multiple Callisto flybys -- (a resonant orbit), then Ganymede flybys, elliptical orbit, then circular. JGO, unlike JEO, would be solar powered. There would be a six-year cruise, 28 months in Jupiter orbit, 9 months in Ganymede mission. Request for instruments from ESA went out yesterday (3/26/09). The double-orbiter architecture would enable stereo of Io's plumes and Jupiter's storms. Also JEO can fly by Io while JGO studies Io torus.