Rosaly Lopes is sending us reports from The Planetary Society's member trip to view the Aurora Borealis in Alaska from March 19-25. Lopes is Lead Scientist for Geophysics and Planetary Geosciences at the Jet Propulsion Laboratory and an investigation scientist on the Cassini Titan RADAR mapper team. Her main research interests concern volcanoes in the solar system, especially on Earth and Io.

After a late start (we were all tired after the late night), it was my turn to give a talk. I had planned to talk about volcanoes anyway, but the fact that Redoubt erupted while we were up here made it more interesting and relevant to everyone. After the talk, Dennis gave us an update on aurora conditions. Activity low, but most of us decided to go back to Mt. Aurora to try again.

Before that, we visited the Museum of the North and went to visit dogs. Yes, Leslie, the owner of Paws for Adventure, had a sled dog team ready and gave us a demo. I already had plans to stay a day late just for the chance to go dog sledding with Leslie. Another woman from the group was also staying to do the same.

After a farewell dinner, we stopped to see some curling, which seems to be a popular sport here. Some of our group tried it. I'm not sure I understood the rules, but it was fun to watch.

We arrived at Mt.Aurora after dark and an arc was already forming. The aurora was less bright, but covered more of the sky -- about half the sky. It was beautiful and different from the previous night. Just as we decided to leave at 1 am, the aurora picked up and started "dancing". We could even see some faint magenta color in addition to the green. Quite a show. 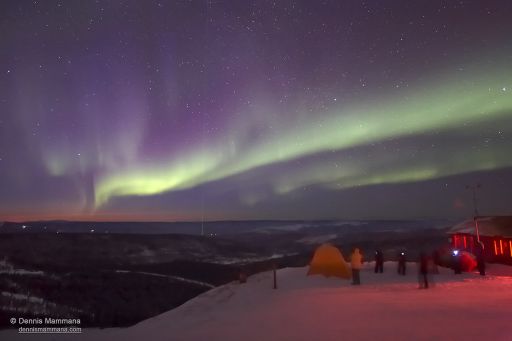 To the left of center appears a nearly vertical beam. The LIDAR Observatory at the Poker Flat Research Range behind the ridge, about five miles north, was shooting a laser beam skyward.

Most of the group left Wednesday morning. Joan and I went dog sledding and it was amazing, I highly recommend an extra day for that. We rented a car and after the sledding, we drove to North Pole, Alaska. Quite fun, and a great place to mail a postcard from.

Joan left late that night. I was scheduled to fly home Thursday but Redoubt decided to give me a parting gift and erupted violently shortly before my flight. I was still able to make it to Anchorage, but all flights from here were cancelled. So, I am due to leave for Seattle late on Friday, staying there overnight, getting back home Saturday. This is the first time that I am annoyed that a volcano has erupted!

I enjoyed this trip immensely. Wish me luck as I try to get home.