Great news arrived in my inbox this morning: after several months' hiatus around the period of Mars' solar conjunction, the Visual Monitoring Camera on Mars Express is back in business. VMC is an engineering camera on Mars Express whose purpose was to document the departure of the ill-fated Beagle 2, and following the Beagle 2 deployment it wasn't used for years. Last year, though, ESA fired it up again, because although it's probably safe to say it's the lowest-quality camera at Mars right now, it's the only one that regularly gets full-globe shots of the planet. And because of Mars Express' unique orbit, its Mars photos can be crescent views, which is very unusual. Here's one from the most recent batch, which looks (to me) much more similar to Venus than it looks like Mars: 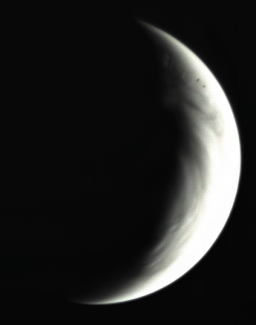 After being offline for three months while Mars Express passed behind the Sun, the Visual Monitoring Camera (VMC) -- known around here affectionately and unofficially as the 'Mars Webcam' -- is back in action.

Here at ESOC, Mars Express Spacecraft Operations Engineer Thomas Ormston has spent the past few weeks working to integrate the blog backend with the Mars Express Mission Control System, and the results speak for themselves -- the site runs great!

And get this: VMC images are now captured, stored on board, downloaded (with space-available priority) to ESOC and posted into our blog automatically! Is that cool or what..? :-)

In fact, Thomas says it could even happen that, if no higher-priority data were waiting for download and a ground station pass were to happen immediately after imaging, the Mars Webcam pictures could appear right here in the blog less than an hour after the taking.

As always with VMC, we want to fit around existing Mars Express science and that means the imaging forecast for April 2009 is just two observations. But as May gets going, we've got a packed VMC schedule with observations almost every day.

Also, with the site rebuilt as a blog, we are hoping to get **lots** more public participation and comments/questions as the imaging season unfolds...