This morning at the Lunar and Planetary Science Conference would have presented a challenge to me. On the one hand, there's the Moon, with a whole session devoted to Chandrayaan-1 and Chang'e 1 (actually, upon reading the abstracts, it was mostly Chandrayaan-1). But it was scheduled back-to-back with a session on the icy satellites of Jupiter and Saturn. I'll confess I probably would have made an effort to attend the lunar sessions, because you just don't get many results out of the Asian missions, but would eventually have crept away to the outer planets moons sessions.

For the most part, the abstracts from the lunar session contain descriptive information about each science instrument and about the commissioning phase of the mission, before science data was available, so there's not a lot of new stuff to report on. There was one abstract, reporting on the first results from the Moon Mineralogy Mapper, that did dare to put in writing some analysis: "A major new result is that the existence and distribution of massive amounts of anorthosite as a continuous stratigraphic crustal layer is now irrefutable." Anorthosite is the igneous rock that makes up the bright highlands areas of the Moon, in contrast to the much darker, basaltic igneous rocks that makes up the lunar maria. This statement was based upon mineralogical and stratigraphic analysis of the Orientale basin, one of the youngest big impact features on the Moon and one of the few that hasn't been entirely filled with basalts. The Moon Mineralogy Mapper team's conclusion basically states that underneath all those lunar basalts is more anorthosite.

By contrast, the abstracts from the icy satellites sessions had a lot more in-depth analysis of the geophysics underlying the surface features and shapes of icy moons. But after reading the abstracts it seems like an awful lot of the analysis is still producing more questions about the icy moons of Saturn and Jupiter than they are answers.

As Cassini flew by Iapetus on September 10, 2007, it took 13 images of the equatorial ridge rising over the horizon. Most of the flight is over Iapetus' dark terrain, but at the very end of the animation, the white flanks of the Voyager moutains begin to appear.

The next presentation, by Jay Melosh and Francis Nimmo, looked at the narrow, steep shape of the ridge and asked: what structure that we've studied on Earth does it most resemble? They decided that Iapetus' ridge most resembles a dike, a volcanic structure that forms when a fissure opens in a stiff crust and is filled by intrusive magma. The abstract goes through a possible scenario that could create the right kind of stresses to make a dike form along the equator: it involves despinning happening at exactly the same time that there is unusual heating along the equator. They conclude that "Although one could complain that this combination of despinning stresses and equatorial heating is somewhat contrived, there seem to be few other scenarios that can fit the observations." Scientists don't like having to argue that two different processes were just coincidentally happening at the same time, but they conclude that the coincidence is "not unreasonable" and that "further exploration of an intrusive, extensional origin of the bulge is likely to be fruitful."

The next paper in the session is by Paul Schenk and Jeff Moore, two scientists who do a lot of comparative studies of icy moons all over the outer solar system. For this talk they focused on Dione, in particular on the evidence for eruptive volcanism on Dione's surface. They found that Dione has all sorts of geomorphological features that are probably associated with volcanusm that are just not observed on other icy satellites -- smooth plains centered on a couple of possible big volcanic complexes, and chasms that radiate out from those complexes. Just another indication that each moon is a world unto itself, with its own fascinating and unique geologic history. Naturally, some of the most interesting features on Dione march off into an area that hasn't yet been imaged very well by Cassini -- the north pole. It hasn't been imaged very well yet because it's been in winter darkness since the spacecraft arrived at Saturn. That's changing soon, and Paul and Jeff argue that mapping the north pole should be "a priority target during future close encounters with Dione." 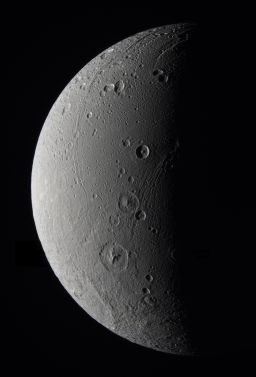 Cassini took the images for this mosaic of Dione on December 24, 2005. Infrared, green, and ultraviolet images have been processed to make the mosaic resemble Dione's approximate true color. In between larger craters, Dione's plains are very smooth, indicating a possible history of volcanism. Chasms and chains of craters are also evidence for an interesting geologic history. 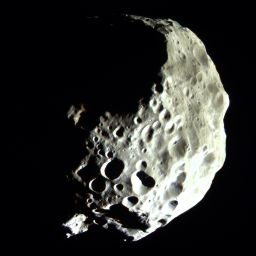 The next abstract, by Sami Asmar and coauthors, provided one of the first reports I've seen on attempts to determine the internal structure of a moon (in this case, Rhea) from radio tracking data. In brief, the results are inconclusive. The problem is that they don't know whether Rhea is "hydrostatic" or not, meaning that it's not known if its shape represents an equilibrium between the forces due to gravity and the forces due to its spin. In brief, despite approaching the problem from a couple of different directions (radio tracking and looking at topographic profiles of the moon from observations of the shape of its limb silhouetted against black space), they still don't know whether it's hydrostatic or not.

The next paper, by Zhang and Nimmo, looked at the orbital evolution of Enceladus and Dione (the two are linked: Enceladus and Dione are in an orbital resonance, where Enceladus orbits twice for every single Dione orbit) and went through some mathematical modeling to see if there was likely to be an ocean underneath either of the two. The result: Enceladus probably does have one, and the idea that Dione does "cannot be ruled out."

The next paper, by Susan Kieffer and coauthors, is notable because it overturns an earlier result that I've quoted a lot. In the past, it's been argued that Enceladus' plumes are made of roughly equal amounts (by mass) of vapor and solid ice. But Kieffer's study shows "that the mass of ice in the column is significantly less than the mass of water vapor....This implies that the plume is dominated by vapor and can easily be produced by sublimation with recondensation. Therefore, [there is] no compelling criterion for consideration of a liquid water reservoir." To translate, you don't need near-surface liquid water to produce the amount of ice crystals seen in the plumes. (However, I don't think this study addresses another argument for the presence of near-surface liquid water, which is the high heat flow observed at the surface.)

The final abstract in the session, by Francis Nimmo and Bruce Bills, takes issue with the conclusions of the Cassini radar team, that Titan's crust is spinning faster than its core, evidence for its crust being "decoupled" from its core by an internal ocean of liquid water. They argue that Titan's orbit may be precessing, in which case "the spin rate must be somewhat faster in order to match the sum of orbital mean motion and apsidal precession rates," so that it is a synchronous rotator through and through.

All in all, icy moons seem to be a really dynamic field of study, and there's a lot more for Cassini to do to illuminate what's going on at Saturn's moons, and lots more to learn from a future Jupiter satellite mission, and a later mission back to study Saturn's moons will not be a waste. Also, based on my writeup above, it seems like Francis Nimmo is a real troublemaker, throwing a wrench into a lot of people's conclusions, and sometimes advocating for two different explanations for something that's going on at an icy moon. (No criticism meant here: when nobody really knows what's going on, it seems that exploring lots of different possibilities is the right way to go!)