So the Lunar and Planetary Science Conference (LPSC) started this morning in Houston, and I am seriously bummed about the fact that I can't be there this year. I'm hopeful that I'll receive a couple of messages from friends attending the conference describing interesting talks, posters, or hallway conversations, but it won't substitute for actually attending.

One small consolation is that the "abstracts" written for LPSC are nothing at all like the single-paragraph notes that announce talks at most conferences; they're almost like miniature scientific papers, two full pages of small type, often illustrated (though it should be noted that unlike scientific papers, LPSC abstracts are NOT peer-reviewed). So if I can't be there, at least I can read through the abstract volume and find out about what the presenters were planning on presenting at the conference a couple of months ago.

Today, the schedule includes a full day of oral sessions on Phoenix, morning sessions on the Moon, comet Wild 2, and astrobiology, and afternoon sessions on planetary formation and Venus' atmosphere. If I were attending, I'd probably have focused on the Phoenix sessions, so here's what I got out of reading the abstracts. Links mostly go to PDF-formatted abstracts, which may be a few hundred kb to a few Mb in size.

In "In Situ Analysis of Ice Table Depth Variability under a Rock at the Phoenix Landing Site, Mars," Hanna Sizemore and coauthors report on the results of one little experiment performed with the robotic arm: what did they learn when they looked under Headless? Headless was one of the rocks within reach of the arm. On sol 117, they used the arm to scoot Headless from its former position into the Neverland trench. On Earth you might move a rock to see if any bugs were underneath it, but on Mars they were looking for something different: how did the area underneath a rock look different from dirt-covered areas at the landing site, and, specifically, what did the subsurface ice table do under that rock? Sizemore reports that underneath Headless, the ice table dipped. This dip tells them two important things:

First, diffusion is likely the primary mechanism mobilizing water in the shallow regolith in the current epoch. Locally shallow ice beneath the rock might indicate recent water transport via thin films or liquid water, but is not observed. Second, the apparent equilibrium between ground ice and the atmosphere is a long-term phenomenon (>103 yr). A recent shift in climate conditions would likely cause the magnitude of the ice table depression associated with the rock to deviate from theoretical predictions. Again, this is not observed. Taken together, the range of ice table depths measured at the Phoenix landing site and the detailed behavior of the ice table near Headless argue strongly for a prevailing equilibrium between ground ice and atmospheric water, and indicate that physical models of ground ice employed for the past four decades are largely appropriate." 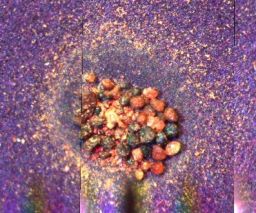 This color photo from Phoenix' Optical Microscope shows soil particles "scavenged" by a powerful magnet from samples delivered to other microscope slides by Phoenix' robotic arm. It was taken on sol 124 as a "before" image, and followed by another image showing the delivery of the "Galloping Hessian" sample from beneath the rock named "Headless."

Phoenix frequently captured many images of the "telltale" atop the meteorological mast in order to study wind speed and direction at its landing site. The 64 images in this animation were captured over the course of about an hour near local noon, and document some of the largest excursions yet observed for the telltale, some of them right out of the image frame. The telltale is generally being blown toward the north and northwest, indicating winds coming from the south at that time of day.

As that rounds out the morning Phoenix sessions, I think I'll wrap up the post there!