Welcome to the 93rd Carnival of Space! Today's a day worth celebrating at a carnival. NASA's Kepler spacecraft is scheduled to launch tonight on its mission to discover Earth-sized worlds orbiting other stars, adding to the list of hundreds of exoplanets that have been discovered in the past couple of decades. On this special occasion, we here at The Planetary Society have launched a new Catalog of Exoplanets that tells you all the essential information about each of the more than 300 known exoplanets; we look forward to the successful launch of Kepler, and hope it'll add hundreds more, including many that remind us of our home world. 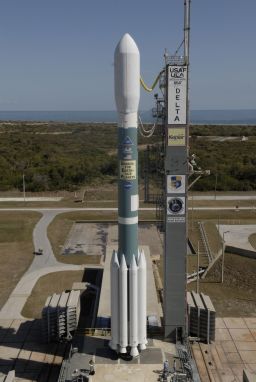 On March 6, 2009, the Kepler exoplanet-hunting spacecraft awaits its evening launch, perched on the tip of a Boeing Delta II 7925 rocket.

We'll start within Earth's gravity well, on Earth and in orbit, where the vast majority of spacecraft ever launched remains. OrbitalHub tells us about Japan's HTV (H-II Transfer Vehicle), a workhorse unmanned spacecraft designed to deliver supplies to the International Space Station (ISS). There'll be a lot of supplies going to the ISS over the next couple of years, but opportunities for space tourists to visit are ending, according to Space Cynics. But plenty of people can still "tour" space through the eyepiece of a telescope; Visual Astronomy highlights some of the most amazing photos of green, two-tailed Comet Lulin.

Work is going forward to remodel the vast infrastructure required to send humans into space; collectSPACE has a note on "Lightning" the load of towers surrounding launch pad 39B at Kennedy Space Center. Next Big Future analyzes one technology that'll never (I predict) be used to launch humans into space but which could lower launch costs: the use of a contained nuclear explosion to launch massive payloads into space. Starts with a Bang ponders the ethics of Project Paperclip, in which former Nazi scientists were put to work in the early American space program. And the Spacewriter considers whether all the stuff launched into Earth orbit amounts to an artificial ring.

To remind us that going to space requires the work of thousands of individuals, Out of the Cradle interviews Guillermo Söhnlein (founder of the International Association of Space Entrepreneurs), while the Chandra blog invites us to meet astronomer Dr. Peter Edmonds. To help us understand the concepts behind astronomy and space flight, Music of the Spheres points us to a helpful site called Stargazers to Starships.

The Moon is still in Earth's orbit, but it's the first step toward the rest of the universe. This week New & Noteworthy from the LPI Library highlights their Moon 101 lecture series. The Bad Astronomer digs into the lunar exploration archives, discovering alternate footage of the famous first steps on the Moon. And the Astroblogger digs even deeper, four centuries back, rereading Galileo's reports on his first telescopic studies of the Moon.

At last we leave Earth orbit and head for the most Earth-like planet in our own solar system, Mars. Understanding whether Mars ever could have harbored life (much less whether it did) will be critical to the interpretation of Kepler's results, and the likelihood of any of the Earth-like planets it discovers being inhabited. It would help a lot to bring Mars rock samples back to Earth for study; Robot Explorers reviews an early Mars sample return mission concept from Northrop Grumman. Until we return samples, the best we can do is trek across Mars with the robotic geologists Spirit and Opportunity; Cumbrian Sky documents the first sighting of the rim of Endeavour crater, a destination still more a year in the future for Opportunity.

Now we travel beyond the habitable zone, into the outer solar system. Earth-like worlds are compelling targets, but the Gish Bar Times reminds us of the strange and fascinating sights of Io's volcanic paterae.

It's difficult to understand the vast emptiness that separates objects within our own solar system; and even harder to make the mental leap to other solar systems and beyond. Space Disco helps us understand the size and scale of the universe. Fortunately the distances to supernovae are huge; Universe Today tells the story of the discovery of one recent stellar explosion, Supernova 2009ab. (Woe be to any worlds in the habitable zone of that ex-star system.)

Figuring out what life might look like in other star systems requires a certain amount of imagination -- and I'd hazard a guess that the creative minds pondering these questions derive some inspiration (or, at least, amusement) from the world of science fiction. A Babe in the Universe met the cast of the new Star Trek movie and hopes it honors real space exploration as much as the original did. And Astroengine writes about a truly "creative" experiment: the Artificially Expanded Genetic Information System, possibly the first steps toward artificial life.

So we've journeyed out to the realm of other stellar systems. Centauri Dreams considers how the possible discovery by Kepler that Earth-like worlds are common will affect humanity's expectations for the existence of life elsewhere in the universe. What about intelligent life? Lounge of the Lab Lemming asks how the great lengths of geologic time affect the likelihood that we'll ever be visited by an extraterrestrial civilization. Finally, here at The Planetary Society, we're hoping that Kepler will move us forward in the search for extraterrestrial life, but while we wait for life to be discovered, we'll catalog all of the strange and diverse extrasolar worlds that Kepler and other exoplanet searches uncover.

Thanks for dropping by the Carnival! For those of you who haven't visited The Planetary Society Blog before, I post every day, mostly about the exploration of our own solar system, both past and present, in stories and in pictures. I hope you'll come back and read again soon. 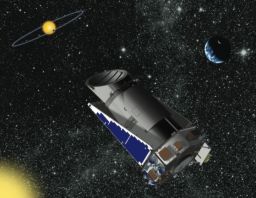