There's a new scientific paper in press that states that Pluto has much more methane in its lower atmosphere than previously thought. Pluto's atmosphere is very thin (somewhere in the range of 0.0006 to 0.0024 percent of Earth's atmospheric pressure), but no matter how thin your atmosphere is, methane makes a big difference, because it's a potent greenhouse gas. The methane reportedly warms the atmosphere near Pluto's surface to a balmy minus 180 Celsius (-290 Fahrenheit), 40 degrees C (70 deg F) warmer than the surface. Why is the surface so much colder? Because the sublimation of the solid methane on the surface to gaseous methane in the air is an endothermic process, robbing the surface of heat. Because of the behavior of methane, Pluto's atmosphere is actually coldest at the surface and warms with altitude; that is, it's all stratosphere, no troposphere. (Or, according to the paper, there's at most 17 kilometers of troposphere.)

The paper, "Pluto's lower atmosphere structure and methane abundance from high-resolution spectroscopy and stellar occultations," by Emmanuel Lellouch and coworkers, is available for download, and it's not too long, so you should give it a try. There are some interesting tidbits within it. One is that although the authors find much less methane in Pluto's atmosphere than they find nitrogen, the abundance of methane is still difficult to explain: "the methane/nitrogen mixing ratio we derive is orders of magnitude larger than the ratio of their vapour pressures at any given temperature, and the discrepancy is even worse if one considers that methane is a minor component on Pluto's surface." One possible explanation is that a thin layer of methane frost covers the whole surface of Pluto, and it prevents more nitrogen from sublimating. Another possibility is that there are small patches of pure methane ice on the surface, which (because methane is highly absorbing) get warmer during the day than nitrogen ice, so they sublimate more readily than the nitrogen ice does. The artwork below depicts the methane-ice-patch hypothesis. 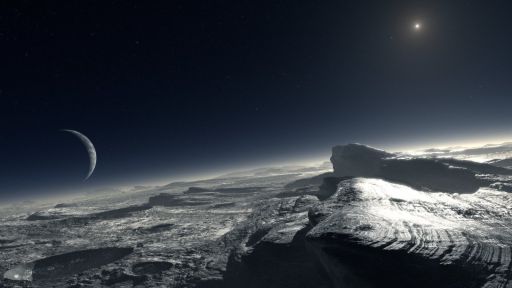 Patches of methane ice may warm in the wan sunlight of Pluto's day, sublimating and enriching Pluto's atmosphere with gaseous methane. 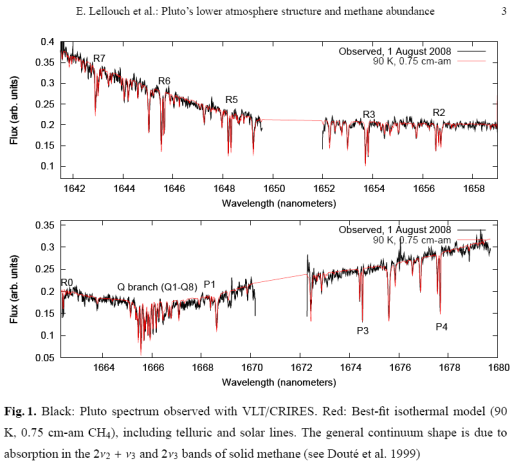 To make a long story short, we don't know Pluto's diameter to very great precision. This study reports a pretty precise radius measurement of 1,169 to 1,172 kilometers, that is, a diameter of 2,338 to 2,344 kilometers, which is a bit bigger than the number I had on my Pluto page. For more on using stellar occultations to estimate the diameters of Pluto and Charon, check out this or this earlier blog entry on Charon's diameter.

Of course, if we just wait a few years, we'll get much better information on the diameters of Pluto and Charon, and their moons, as well as information on what's in the atmosphere and how warm it is, when New Horizons flies by in 2015. But remember that Pluto's atmosphere is a changing thing; no matter how wonderful the New Horizons data set is, it will only provide a snapshot in time. Earth-based studies like this one will continue to tell us about how the seasons change Pluto with time.