Every morning as I eat breakfast I've been tuning in to Scott Maxwell's blog for my latest blast from Spirit's past. (As I've mentioned before, Scott is a rover driver who has just started up a blog that consists of his daily journals from five years ago, when the rovers first landed.) I was expecting the sol 19 post to contain his notes of confusion from that scary day when Spirit fell silent, but it turns out that although the anomaly happened on sol 18, we didn't realize that something was badly wrong until sol 19. So I was expecting it one day too soon.

Then, this morning, I was foiled again, because of the Mars clock. Early in the mission, Scott and all the other mission staffers (and hangers-on like me) were running on Mars time, which lags behind Earth time by about 40 minutes each day. So for the first couple of weeks his daily blogs reliving that time were getting posted some time in the middle of the night and were available for me to read at breakfast, but while I wasn't paying attention that posting time has crept later and later until this morning I sat down to breakfast and there was no new blog entry! Today's didn't get posted until 9:22 am. Tomorrow's will come at around 10 am. This was a brutal period of the mission, when Mars time had us finishing our day's work just as normal people were getting to work. Driving home from JPL every day, I actually hit rush hour traffic, but it was the morning rush hour instead of the evening rush hour. That really stank.

Anyway, today's sol 20 post from Scott finally contained the first -- and probably still the biggest -- scare from the rovers' time on Mars: Spirit quit talking to us, or at least quit talking to us in a way we understood. It was just a couple of days before Opportunity was to land. Five years and two days ago, there was one perfectly healthy rover and one on the way. Five years ago, there was a very sick rover, and suddenly I think everyone felt less confident about Opportunity's survival. The sick thought occurred to many people that in two days, we could have zero surviving rovers. It's thrilling to relive that time, and enjoyable, too, because I know it has a happy ending.

Here's a snapshot I took that day...I really should have handed the camera to one of the kids and gotten a picture or two of me in mission operations for my scrapbook! 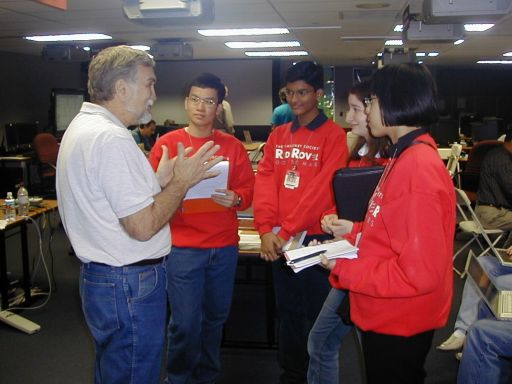 This was Sol 19, and Spirit had just suffered a serious anomaly and was not talking to Earth. University of Arizona geologist Ron Greeley helped put the event into perspective for Shih-Han, Vignan, Abby, and Wei Lin. The four students had an unusual viewpoint on the mission and got to see how the scientists coped with the temporary loss of the spacecraft.