Armchair scientists' use of spacecraft image data -- a subject near and dear to my heart -- has been getting some screen space and air time in the last couple of weeks. The Jet Propulsion Laboratory did a nice feature titled "Socializing on Mars" about the online communities that have sprung up online to follow Spirit and Opportunity, including Keri Bean's Facebook pages and, of course, unmannedspaceflight.com.

I do have one issue with this otherwise excellent piece. The second paragraph reads "To date, literally thousands of rover images have been analyzed and discussed in detail. But the rovers have sent back about a quarter-million images. NASA decided this incongruity could be best addressed by making every single Mars rover image available to all who were interested -- and had Internet access." While it may be true that NASA made the ultimate decision to share all the Mars Exploration Rover images with the public as soon as they hit the ground, they did so at the urging of principal investigator Steve Squyres and Pancam lead (and Planetary Society President) Jim Bell. They saw the need, proposed the idea, and pushed NASA and JPL into implementing it. And now, because of their example, Cassini-Huygens, New Horizons, and Phoenix shared/are sharing their images in the same way. I will be forever grateful to Steve and Jim for that leadership!

Also in the past week, two of the 365 Days of Astronomy podcasts have focused on amateur imaging. In the first, aired last week, Bill Dunford describes how to get started playing with space data, in "How to be an Armchair Astronaut." In the second, aired today, Doug Ellison talks about what the imaging experts are doing, in "Bootleg Postcards -- Armchair Astronauts Exploring the Solar System." If listening to podcasts isn't your thing, never fear, the 365daysofastronomy site has full transcripts of both podcasts that you can just read.

Finally, just as I posted this, Nancy Atkinson over at Universe Today posted a related story on Citizen Science at unmannedspaceflight.com, so go check that out too. (While you're there, note the unrelated but still cool post from Ian O'Neill on how the Obama inauguration is going to be photographed from space.)

It'd be wrong to write a post about amateur imaging without including a nice amateur image, so here's a recent Cassini image of Tethys, processed by Gordan Ugarkovic from the high-quality data archived at NASA's Planetary Data System. 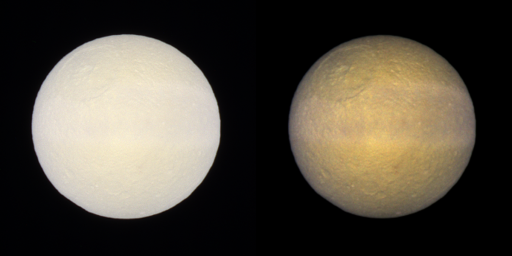 Cassini took this false-color photo of Tethys on January 5, 2008, when it viewed Tethys almost completely lit by the Sun. At a phase angle (sun-Tethys-spacecraft angle) of less than a degree, shadows disappear and the surface brightens, a phenomenon known as the "opposition surge." Without shadows, subtle color variations become much more clear. In the version of the image to the right, those variations have been enhanced, emphasizing the band of color that crosses Tethys' northern hemisphere. As yet, scientists do not have an explanation for Tethys' color band.