EDIT March 3, 2009: In the entry below, I hypothesize about why the Chandrayaan-1 images look less crisp to me than the SAR images I'm accustomed to seeing. Neither of my hypotheses was correct! Paul Spudis explains what's going on at his blog at Air & Space Magazine.

NASA has released some images, the first to be seen by the public, from the Mini-SAR instrument on India's Chandrayaan-1 orbiter. Mini-SAR is one of two instruments that NASA contributed to the Indian mission, the other being the Moon Mineralogy Mapper (or M3).

The acronym SAR stands for Synthetic Aperture Radar. It's a tricky method of using a radio antenna to produce amazingly detailed images. Briefly, the radio dish is used to broadcast a chirp signal at the surface (a signal that varies in frequency with time), off to one side of the spacecraft, and then it listens for the echo. The echo comes back from a large area of the surface, but it comes back later from parts of the surface that are farther from the spacecraft. Also, the reflections that come from the direction that the spacecraft is moving are Doppler-shifted to higher frequencies, while the reflections that come from behind the spacecraft are Doppler-shifted to lower frequencies. By doing some complicated computational deconvolution of the reflected signal, radio scientists can produce an image of which areas within the SAR beam were brighter reflectors and which dimmer. SAR images usually come in long skinny strips, parallel to (but to one side of) the ground track of the orbiting spacecraft; these strips are often called "swaths" (which is a term I use all the time and don't define frequently enough. My bad.)

Here's one of the first Mini-SAR swaths on a lunar pole, in this case the south pole. 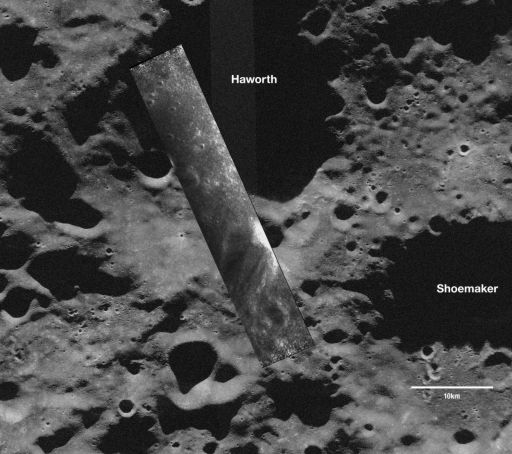 The Mini-SAR is a miniaturized radar instrument on Chandrayaan-1 that will map the lunar poles (the regions poleward of 80 degrees latitude). These areas have been difficult to map in the past because they are always lit from an extreme angle by the Sun, and some areas are in permanent shadow. Synthetic Aperture Radar or SAR uses an active radio source to illuminate the landscape, so it does not rely on the Sun for imaging. The base map for this view is an Arecibo radio image of the lunar south pole, overlaid with a small strip of Mini-SAR data. The Mini-SAR strip is approximately 18 kilometers wide by 50 kilometers long, and covers a crater, Haworth, whose floor is in permanent shadow.

The other reason I can think of that the images don't look as crisp as ones from Venus, Earth, and Titan is because the Mini-SAR is a miniaturized instrument. The instrument website says it masses only 7 kilograms, which is pretty small. Usually there's a tradeoff between capability and mass in space instruments.

According to the National Space Science Data Center web page on the instrument, it's supposed to take only two weeks to acquire all the data for a complete mosaic of both north and south poles. But I don't expect to see the actual mosaic that quickly. To make SAR data look really good requires an incredibly precise understanding of the position and velocity of the spacecraft at every moment, and with the Moon's notoriously lumpy gravity field, there are bound to be some pretty significant uncertainties in Chandrayaan-1's position. It'll take a lot of calculation and recalculation to make the SAR images look really good. So we'll have to be patient, but it'll be worth it, to get the first clear look at the surface of the lunar poles.