I've been accumulating a pile of interesting papers to read and finally got a chance to start going through some of them today. The first is "Radar Sounding Evidence for Buried Glaciers in the Southern Mid-Latitudes of Mars," by John Holt and coauthors; Holt is the guest on this week's Planetary Radio show. In the paper, they present evidence from a radar sounding instrument on Mars Reconnaissance Orbiter called SHARAD that suggests that a particular class of features on Mars called "lobate debris aprons" are made mostly of nearly pure ice, topped by a thin layer of rock debris. If true, this is cool, because these features occur at lower latitudes (closer to the equator) than the ice that we can see at Mars' poles. Visiting one would be a way to study Martian ice in a place that's not subject to the polar weather extremes that eventually spelled the end of Phoenix; looking far ahead, they could represent a necessary resource for future human exploration of Mars.

Before I go on, I should probably show you a picture of what a lobate debris apron looks like. 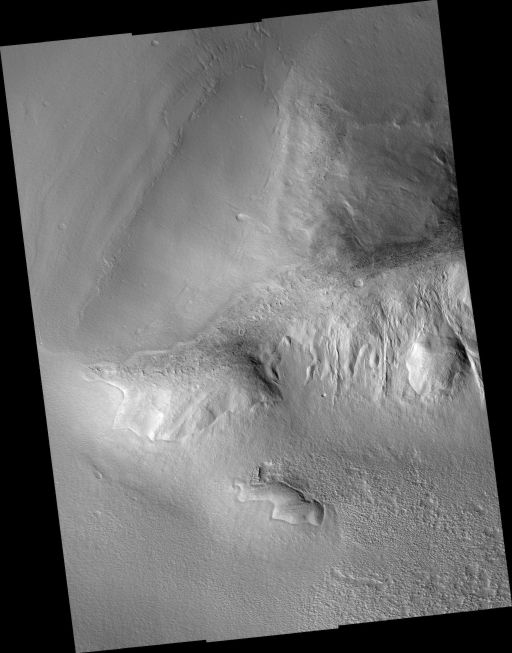 Lobate debris aprons are Martian features that occur on the flanks of steep slopes in mid-latitude areas, particularly on the eastern side of the southern hemisphere Hellas impact basin. In most places on Mars and Earth, steep slopes shedding debris produce talus fans or cones at their basins. These lobate debris aprons are different. They slope much more gently, and where they end in the valleys, they are convex upward, having relatively steep outer edges. They tend to be striated or ridged both concentrically and radially. All of these indicate the flow of a viscous material, but Mars scientists have disagreed about whether the viscous material is frost-lubricated debris having hardly any water or true ice glaciers topped with a mantle of rocks.

In this photo, taken by Mars Reconnaissance Orbiter's HiRISE camera on November 12, 2006, a hill crosses the center of the image from right to left. There is a large, broad lobate debris apron above it, having concentric ridges; there are radial fissures near its top edge.

How can there be ice at these lower latitudes on Mars? It's because Mars has no Moon. Let me explain. The presence of our Moon stabilizes the orientation of Earth's spin axis in space, which scientists refer to as the obliquity. Over time, Earth pretty much always has the same tilt -- it varies only from 22 to 24.5 degrees (with a period of 41,000 years). That means that the seasons are always of fairly similar severity to what we have today. Mars has no such stabilizing body in its orbit. Without that stabilizing force, Mars' obliquity undergoes huge variations. Right now, its obliquity is similar to ours at 25.2 degrees, but theory suggests the Martian obliquity could vary from as little as 0.2 degrees (no seasons at all) to 51.4 degrees.

At periods of extreme obliquity, you'd have extreme seasons. Right now, only the carbon dioxide polar caps substantially wax and wane with the seasons. With much more extreme seasons, Mars' water ice polar caps could substantially sublimate into the atmosphere during the summer, and weather models suggest that in certain places on Mars, notably Hellas basin, you could get quite a lot of snow. As it does on Earth, lots of snow could potentially build glaciers. So these glaciers may well be markers of a totally different climate on Mars, with unbelievably extreme seasons.

One thing I'd like to point out about this work is that it totally wouldn't be possible without the awesome Mars Orbiter Laser Altimeter data set on the topography of Mars, produced by Mars Global Surveyor. In places like Hellas where there's extreme topography, it can be extremely difficult to tease apart which signals come from the surface right below you, which come from peaks to each side of you, and which are the dim reflection signals from those interesting subsurface reflectors. To make it work, for every sounding profile the SHARAD team has to create a simulated profile, based upon the laser altimeter topographic data, of what the profile would look like if all of the reflections came just from surface features. With that in hand, they can look at the real profile, ignore all those surface reflectors, and find their precious subsurface reflectors.

This is one example of how Mars science progresses from one mission to the next; each mission lays one course of bricks in the pyramid, without which the subsequent missions could not reach as high. There's no way we can subject every interesting body in the solar system to the same level of scrutiny that we're devoting to Earth, the Moon, and Mars, but what we learn from two successive missions to the same body is almost always going to be more than the sum of their individual contributions.