Yesterday the Indian Space Research Organisation released two images taken by the Chandrayaan-1 Moon Impact Probe (MIP) as it descended toward its impact on the lunar surface. Here they are -- they show a very rocky and dusty lunar surface near Shackleton crater, near the lunar south pole. 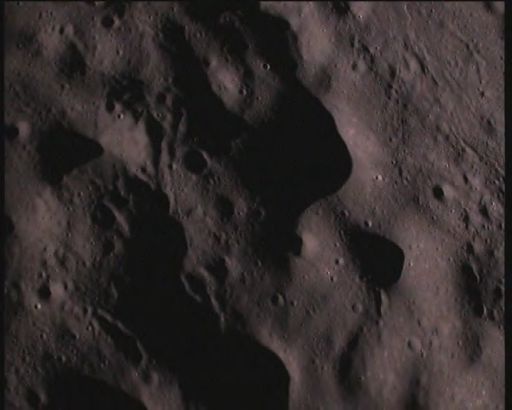 Chandrayaan-1's Moon Impact Probe captured this image as it descended to a hard impact on the lunar surface on November 14, 2008.

Weighing 34 kg at the time of its launch onboard Chandrayaan-1, the box-shaped MIP carried three instruments -- a video imaging system, a radar altimeter and a mass spectrometer. The video imaging system was intended to take the pictures of the moon's surface as MIP approached it. The radar altimeter was included to measure the rate of descent of the probe to the lunar surface. Such instruments are necessary for future lunar soft landing missions. And, the mass spectrometer was for studying the extremely thin lunar atmosphere.

MIP's 25 minute journey to the lunar surface began with its separation from Chandrayaan-1 spacecraft at 20:06 hrs (8:06 pm) IST. This was followed by a series of automatic operations that began with the firing of its spin up rockets after achieving a safe distance of separation from Chandrayaan-1. Later, the probe slowed down with the firing of its retro rocket and started its rapid descent towards the moon's surface. Information from the its instruments was radioed to Chandrayaan-1 by MIP. The spacecraft recorded this in its onboard memory for later readout. Finally, the probe had a hard landing on the lunar surface that terminated its functioning.

Looking at both of the images, I am experiencing the optical illusion where craters become mountains, and valleys become ridges -- I'm having a hard time making the landscape behave properly! The only geologic interpretation I can make is that I see some channel-like features that I think represent what happens to the landscape around the site of a large impact -- sheets of impact ejecta blast outward and carve these sorts of features in the ground.

I wonder what rate these images were taken at -- we may not be able to see a smooth video of the Moon Impact Probe's deadly descent, but it's possible they could have been taken at a high enough rate to get a sense of the ground approaching, which would be cool.* I'll keep you posted if I see more pictures!

*EDIT: according to this article in The Hindu (sent to me by a helpful reader -- thanks, Sashi), the probe actually returned about 15,000 images** over the course of the 25-minute descent. That comes out to 10 frames per second -- slower than regular TV video, but not all that much slower. If that number is correct**, it should produce a pretty impressive animation once ISRO has been able to assemble it.

** Yet another edit: I've now been told that this number is not correct, that the correct number is closer to 3,100, or about two frames per second.