This is a neat animation posted to the Mars Science Laboratory (MSL) website today. It documents the first time that the descent stage was stacked onto the rover, or as much as the rover as has been assembled, anyway. Good news! The two fit together nicely.

MSL, meet your ride to Mars

On November 12, engineers at JPL stacked the body of the MSL rover to its descent stage for the first time. The descent stage is the component of the spacecraft that will use rockets and cables to slow MSL's descent toward the surface and then lower it to the ground before flying off to crash elsewhere. Fortunately, the two pieces were a good fit. They will be stacked and unstacked repeatedly as assembly and testing continues.

I was privileged to have a tour of JPL not long ago and I saw the descent stage, cruise stage, and aeroshell, but not the rover, at a slightly earlier phase of construction. Here's a top-down view of the cruise stage, taken from behind glass in the viewing gallery: 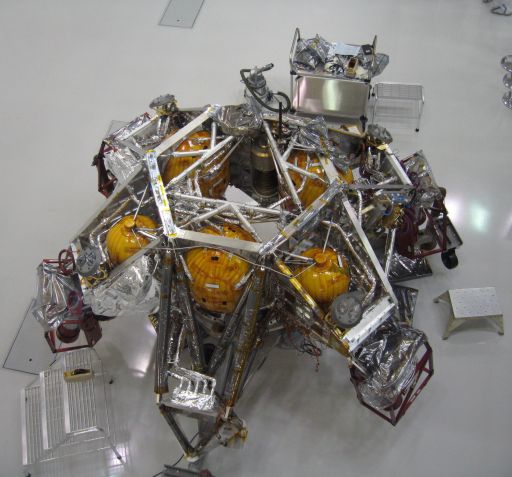 Here's a different view, many shots from my camera assembled into a panorama of the whole "high bay" assembly facility: 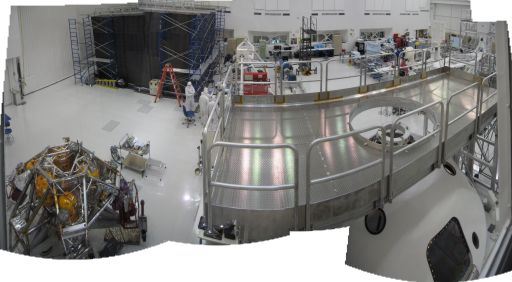 It's difficult to convey how large that aeroshell is. For those of you who are familiar with the Apollo missions, this is larger than the Apollo aeroshell. There is a hatch in the front of the aeroshell that looks exactly the right size for an astronaut to crawl through, and little holes that look for all the world like portholes, just the right size for an astronaut to peep out. You can see one porthole to the right of the hatch in my photo -- there are portholes just like that all the way around the bottom edge of the aeroshell.

If it's not to tempt a stowaway, what's the hatch for? It's there so they can attach the RTG at the last possible moment, just a few days before launch. The thing throws off so much heat that it's actually in danger of overheating the spacecraft, so the cavernous assembly building they'll be using to do the final stacking of the spacecraft onto the rocket has three redundant air conditioning systems to work hard at keeping the thing cool until it's safely launched into cold space. The "portholes" are there for balancing purposes -- they're spots where they can adjust ballast during the final spin-balancing.

Getting back to the photo, in the middle ground on the right is an enormous armature that they had to custom-build in order to be able to turn over the stack of stuff mid-assembly. In the background on the right in the rear is the cruise stage, which is still a bit skeletal at this point. There are likely "interesting things" under the gray foil on tables in the background. I was told that one of them is probably DAN, the Russian instrument, one of two that had been delivered at the time that I visited; the other already-delivered instrument was MARDI, the descent camera, which, I was told, was probably already integrated onto the spacecraft.