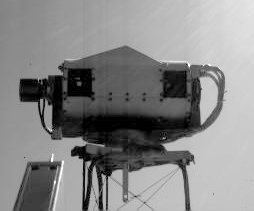 On sol 116, Phoenix used its arm-mounted camera to photograph its mast-mounted camera. The two "eyes" of the camera permitted Phoenix to create stereoscopic views of the landscape.

But its sojourn on was so brief, barely five months, just 60 days past the end of its 90-day nominal mission. The American Mars missions that survive their launch and landing or orbit insertion have set a ridiculous standard for longevity. The Viking 2 orbiter lasted only two years, but the other orbiter lasted four, and the landers an amazing four and six years; Mars Global Surveyor lasted nearly ten; Pathfinder outdid its 30-sol nominal mission by a factor of nearly three; Odyssey is still going strong after seven years. The Mars Exploration Rovers are in a class all their own, having survived almost twenty times as long as their warranties stated. There's no reason to doubt that Mars Reconnaissance Orbiter will last for years to come (though, as Odyssey is aging and there's no new Mars telecom orbiter under development, the health of Mars Reconnaissance Orbiter is going to become increasingly important).

When most Mars missions last so long, can Phoenix have accomplished enough during its 151 sols on Mars to make the effort and expense worth it? It was seven years ago, project scientist Peter Smith said during yesterday's press conference, that he first came up with the idea of using a mothballed spacecraft from a cancelled mission to explore Mars' north pole. And the whole mission cost nearly half a billion dollars, or around three million dollars per day of operations on Mars. 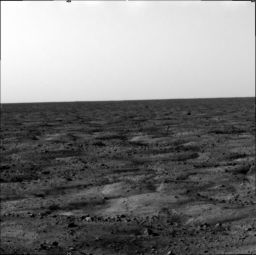 Phoenix confirmed a fact that has long been suspected but could not be proven without in situ investigation: that the polygonal patterns that cover vast swaths of flat-lying areas in Mars' high northern latitudes indicate the presence of near-surface water ice. This photo was taken by Phoenix on the day it landed, May 25, 2008.

Phoenix did gather all the data that it was sent to Mars to retrieve, accomplishing everything on its list of mission success criteria in August. I had a blog entry prepared for that event but the mission didn't ballyhoo it so I never figured out when to post it -- I think now is finally the appropriate time. What does "mission success" actually mean? When I posted earlier about Phoenix' progress toward Mission Success I asked Mark Adler (formerly Mission Manager for Spirit, Lead Mission Engineer on Cassini-Huygens, and now Chief Mission Concept Architect for JPL) to refresh my memory on this one. He told me

"From the official documents, full and minimum mission success criteria are used mostly during development (i.e. before launch). If you find that you cannot meet your originally stated minimum mission success criteria, that may trigger a termination review. Full mission success criteria are used to drive the design capability during development. An oversimplified explanation would be that you design the system to absolutely assure that you can meet the minimum criteria, and you design it to not preclude meeting the full criteria if things go well and everything is working. For the latter, you make sure that you have the resources (consumables, energy, time) to allow for full mission success. In both cases, the criteria are considered against the duration of the primary mission." That is, even though it's reasonable to expect a healthy spacecraft to last beyond its primary mission, it is designed to be able to accomplish "full success" within the time constraint of its primary mission.

Mark went on: "Once you're in operations, you try to meet the minimum and full mission success criteria, but they are generally negotiable as the mission responds to real events. The criteria are not allowed to force you to do anything stupid, or something that would reduce the science return. E.g. if you have a driving distance mission success criterion on a rover, you wouldn't be forced to drive away from a really scientifically interesting spot just to meet the distance criterion before the primary mission is over." This was relevant for Phoenix, too; they hadn't quite gotten to the number of TEGA samples needed for mission success by the end of their first 90 sols, but they weren't forced to go grab another sample from a less-desirable location, using up one precious cell, just to squeeze that last sample in before the 90-sol mark.

In a way, "mission success" is really just a bureaucratic detail -- it's sort of like a passing grade. A mission is in real trouble if it doesn't "pass," but most people on a mission would aspire to do more than just pass. And Phoenix did do that, making several surprising discoveries: the almost entirely unexpected observation of perchlorate salts in the soil; the soil's unexpectedly high pH and low salinity, and the detection of actual water-ice snow falling from the sky were all mentioned at yesterday's press briefing. Phoenix returned 25,000 images, and analyzed samples in five of the eight TEGA cells, about twice as many as mission success called for. MECA just met its mission success criteria for the wet chemistry lab, but analyzed nine different samples in its microscopy station, three times as many as mission success required. 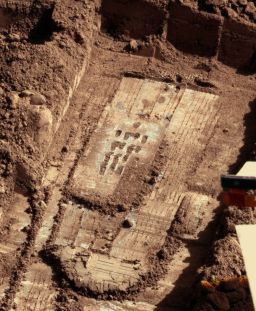 Snow White after the sol 60 rasping

or more than 30 sols, the Phoenix team worked and worked at this trench, named Snow White, to try to obtain a sample of ice-rich soil and deliver it to the TEGA analytical laboratory. In the end, those efforts proved unsuccessful, though a sample of soil scraped from just above the ice layer was successfully delivered and proven to contain water ice. This photo was taken on sol 60, after Phoenix rasped a four-by-four array of holes into the flat floor of the trench, then dragged the scoop bucket across the array to collect as much sample as possible for delivery to TEGA.

That's the problem, though; the best engineers and scientists couldn't predict just how hard it would be to handle these samples of soil and ice. And, in a way, Phoenix's struggle with, and failure to, handle those ice-rich soil samples is another accomplishment of the mission, if a backhanded one. Phoenix was the first in a new line of Mars missions in the "Scout" program. Scout missions are the least expensive of the line of Mars missions, somewhat like (but even cheaper than) the Discovery line of missions to places elsewhere in the solar system. If you want to try out a new idea, it makes the most sense to try it on a cheap mission. Pathfinder (a Discovery mission) was the first to successfully try a rover on Mars; Phoenix was the first to try to handle Martian ice, and the first to carry such a complicated suite of instruments. Phoenix's experience, both the accomplishments and the disappointments, will inform future missions. No doubt the designers of the Mars Science Laboratory sample handling hardware were paying close attention to Phoenix' trials and tribulations.

Also, we've barely scratched the surface of what Phoenix's scientific analyses can and will produce in the coming months and years. There hasn't been a single article, poster, or oral presentation on Phoenix science results to an open audience of scientists as yet. The first such presentations will happen in just over a month, at the American Geophysical Union meeting in San Francisco. That's when we'll begin to get an idea of the legacy that Phoenix has left us. Peter mentioned during yesterday's press briefing that the teams were working on papers for publication in Science -- hopefully the not-yet-published status of those papers won't affect their willingness to share their preliminary science results at the AGU meeting.

Visit the AGU website for a list of the Phoenix posters and talks in sessions U11B and U14A.

HiRISE snapped this photo of the Phoenix lander on June 16, 2008.

Take a moment to pause in whatever you're doing and send your thoughts toward Mars, to think of a human-built artifact sitting on a desolate, frosty plain, with the Sun low in the sky to the south. Though it may not talk to us again, it'll sit there forever -- or at least until some future human arrives to restore it and place it in a museum.

When the HiRISE camera captured the image of Phoenix descending under its parachute, it also captured some color data, though unfortunately not on top of Phoenix. The gaps between the color strips are caused by the fact that the camera's detector is actually made up of 14 staggered CCDs, and the spacecraft had to slew at an angle in order not to capture a distorted view of Phoenix. Most of the color information indicates that the landscape is the usual red of Mars, but some blue spots indicate the presence of frost inside Heimdall crater.