Nearly a week after yet another super-close flyby of Enceladus by Cassini, I am finally taking the time to try and work through the pictures and make sense of them. Unfortunately, I am not sure I can say anything much more intelligent about these images than, "wow, these are cool."

To set the stage: the Cassini Saturn orbiter flew by Saturn's active moon Enceladus again on October 31, 2008, passing at a closest approach distance of 197 kilometers at 17:14:51 UTC. Cassini's path was fairly similar to the one it took for the previous two flybys, coming in from over the north pole, approaching closest in the high southern latitudes, and getting excellent views of the south pole as it departed. This flyby was a bit higher-altitude than the two previous ones, though, so the spacecraft passed through a less-dense part of the south polar plume. That's not so good for the fields and particles instruments, but it's great for imaging, so Cassini's activities during this flyby were controlled by the various optical remote sensing instruments, the cameras and spectrometers.

The imaging team, by which I really mean Paul Helfenstein, planned a second amazing "skeet shoot" imaging sequence for this encounter, similar to the one he produced for the August 11 flyby. Just after closest approach, they wanted to use Cassini to take very high resolution photos of the south polar vents, but the relative speed between Cassini and Enceladus was so high that their usual "point and shoot" style of targeting images wouldn't work. Instead, they planned a series of spacecraft motions that spun the spacecraft at its top angular speed to partially compensate for the fast motion of Enceladus through Cassini's camera field of view, snapping the shutter at specifically timed moments to capture images of interesting spots near the south pole. It worked as well this time as it did the first time. Many, many kudos to Paul. 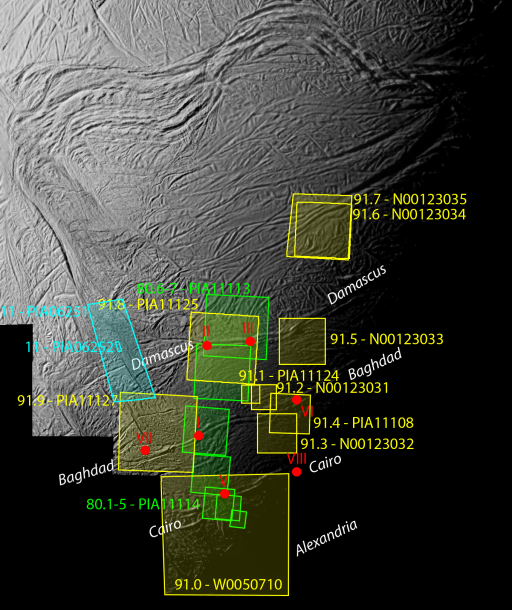 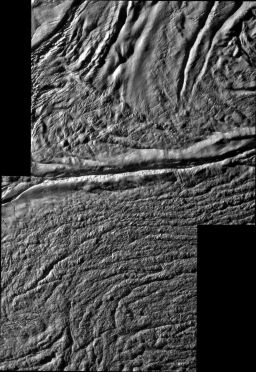 Damascus sulcus is one of four major fissures that crease Enceladus' south pole, from which enormous plumes of water vapor and ice crystals emanate. On an extremely close flyby on August 11, 2005, Cassini snapped two pictures crossing Damascus; the resolution is approximately 30 meters per pixel. Although no plume activity is obvious here, two of Enceladus' plumes (sources "II" and "III") have been traced back to origins in the part of Damascus sulcus visible in this image. 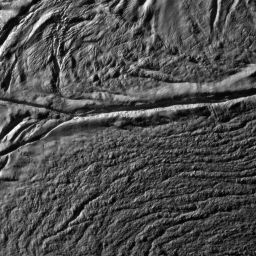 On an extremely close flyby on October 31, 2008, Cassini snapped this photo of part of Damascus at a resolution of 33 meters per pixel. 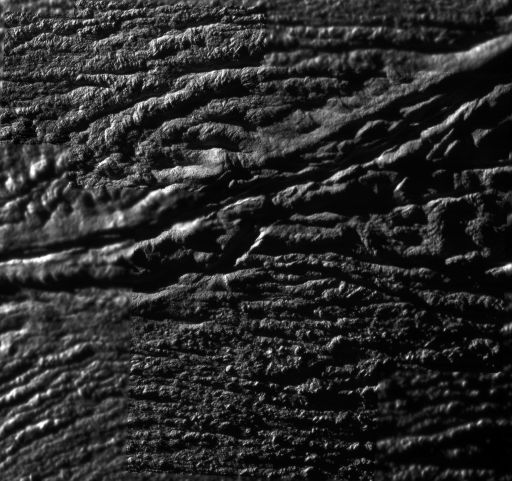 Four high-resolution images are pieced together atop a lower-resolution image to make this composite mosaic of part of Enceladus' enigmatic south polar terrain. The fissure crossing the center of the image is Baghdad sulcus. To the right of center, along the fissure is the source of one of Enceladus' plumes, plume source VI, through no plume activity is obvious in this image. The resolution of this mosaic is a mere 12.3 meters per pixel.

Zooming in on the upper left of that mosaic, to the highest-resolution part of it, I'm struck by how busted-up the surface is. What looks like a neat if slightly rumpled set of nearly parallel ridges at lower resolution is breaking up into an intensely fractured and rubbly area -- I imagine that an explorer on foot would have a really tough time scrambling over the ground here, though of course they'd be helped a great deal by the very low gravity. All those parallel, horizontal ridges are chopped up, vertically, in a million places into skinny triangular wedges; on top of all that, it looks like there are huge boulders just lying on the ground everywhere, on top of ridges and in between them. Where did those come from? How can there be forces acting simultaneously in so many different directions to munge up the terrain so completely? Here's that image at its original resolution: 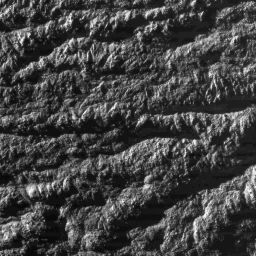 Cassini snapped this photo of Enceladus' south polar terrain in an area in between the "tiger stripes" on October 31, 2008 from a distance of 1,691 kilometers, achieving a resolution of 9 meters per pixel. 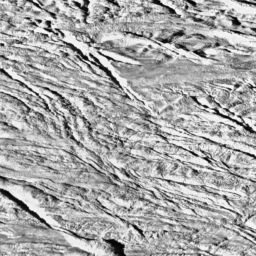 On July 14, 2005 Cassini swooped close to Enceladus, and snapped this image from a range of merely 208 kilomters (129 miles). This is a wide-angle context view for the closeup image, which occupies a central square one tenth the size of this photo.