I was psyched for Britney Schmidt's talk, on a five-telescope campaign to observe Pallas. Since Dawn launched to rendezvous with Ceres and Vesta I've periodically been asked: what about Pallas? Ceres and Vesta are the largest and third-largest asteroids; Pallas is in between. Doesn't Pallas deserve a visit too? My usual answer is that the gods of orbital dynamics were probably at least partially responsible for dictating which other major member of the asteroid belt besides Ceres Dawn would visit. But I'll have a different answer for you after summarizing Britney's talk.

We know quite a bit about Ceres and Vesta, she said, but less about Pallas; until her study, the available images of Pallas were far inferior to the ones for Ceres and Vesta. Pallas is a B-type asteroid; it has hydrated spectra (indicating the presence of water, as on Ceres); its space environment is similar to Ceres, but it is similar in size to Vesta. Most of what Britney presented was on her work with Hubble images of Pallas; she remarked "It was the happiest day of my research career, when these images came down." The first images she showed were rather blobby, but after complicated image processing she came up with the following: 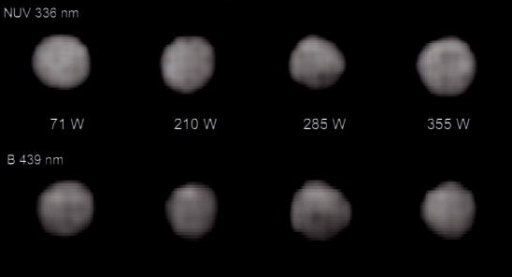 from Britney Schmidt's presentation to the 2008 DPS meeting

Images of Pallas from the Hubble Space Telescope

These two sets of images were taken through different filters on the Hubble Space Telescope's Wide Field and Planetary Camera 2: an ultraviolet filter (top) and blue filter (bottom). They cover most of a rotation of Pallas, and reveal that it has an irregular shape and probably has some patchy albedo variations. In these images, we are looking at the southern hemisphere of Pallas, with the images centered at about 30 degrees south.

At the end she summarized the characteristics of Pallas: it probably has patchy albedo variations, seen especially strongly in ultraviolet and blue filters. She determined its size to be 580 by 550 by 500 (plus or minus 10) kilometers, yielding a density of 2.7 grams per cubic centimeter. That density is intermediate between Ceres and Vesta. She promised more data at the American Geophysical Union meeting.

Getting back to why Dawn's not going to Pallas: if Pallas is intermediate between Ceres and Vesta, it probably makes more sense for Dawn to visit the two endmembers of that continuum, leaving Pallas out of the mix. In addition, Vesta has that huge south polar crater that may well have exposed its deep interior, a bonanza for geologists. Pallas' lumpy shape indicates it also probably has some big impact features, but there isn't evidence for anything as dramatic as what Vesta has. So Vesta it is; Pallas will have to wait for another mission.

Both Pallas' and Vesta's lumpy shapes leave them out of the "dwarf planet" club -- Ceres is the only member of the asteroid belt to be given that honor. But here's some food for thought: Pallas and Vesta are both more massive than Enceladus, which (owing to its ice-rich composition) is round. If Enceladus were floating free in the solar system, would it be a dwarf planet, and Pallas and Vesta, not? Does it even matter? They're all worth studying.

Here's our three friends, and, just for fun, a couple of similar-sized outer solar system moons for comparison.