After presentations by Dennis Lebley and Barend Buutfeld (summarized in the previous entry), Ralph Lorenz from the Applied Physics Laboratory at John Hopkins University gave two short presentations about very small missions: one from the past, but before that, one from the future.

I'll put my hands up and admit that the Titan Saturn System Mission (TSSM) gets my vote over the Jovian proposals for the next outer planets flagship mission (fortunately, my vote doesn't count). [The goal of the next outer planets flagship mission is the subject of much current research and debate; the decision is currently between missions to Titan, Europa, and the Jupiter system. --ESL] I'll talk about the TSSM proposal later, but the baseline is for a lander called Mare Explorer -- think Huygens 2.0, targeted for a lake -- plus a hot-air balloon. They'd both ride piggyback on a large orbiter to Saturn and be deployed to the surface. Lorenz has suggested that the lander include a small aerial vehicle that he entitled the Titan Bumblebee.

Whenever a new type of spacecraft happens, usually it first happens small, and often as a secondary payload. Consider planetary rovers. Whilst a "Viking 3" plan for a tracked version of the Viking lander was proposed in 1976, it took 21 years until Sojourner demonstrated roving on another planet for the first time. Then it took only seven more years for a pair of vehicles like Spirit and Opportunity to arrive. Now, 12 years after 10.2 kilograms (22.5 pounds) of Sojourner wowed the world in 1997, we're a year or so from the launch of a 775-kilogram (1,710-pound) rover called MSL. The Vega balloons, which floated in Venus' atmosphere in June 11 and 15, 1985, rode piggyback on a mission to Halley's comet. No one is prepared to spend a fortune flying a big version of a new type of vehicle.

So, what would you do for the first aircraft at Titan? Titan has a thick atmosphere (50% more dense than our own), but only a seventh the gravity of Earth. In terms of aviation it's superb, albeit a little on the cold side. Set a limit of one kilogram (two pounds). If half the mass were reserved for lithium thionyl chloride (Li-SOCl2) batteries, you would have around 200 Watt-hours of power. So, you can run 200 Watts for an hour, 50 for 4 hours, and so on. The real challenge, however, it to keep it warm. Assuming a 400-centimeter-square surface area, a vehicle would loose around 30 Watts of energy in an atmosphere at just 94 degrees Kelvin. Flying at high speed could mean a further 15 Watts because of the airflow around.

Thus, figuring out such a vehicle's maximum range involves a trade among how quickly you fly, how much energy that means you dump into the vehicle, how much energy you need to spend keeping warm, and how much energy you loose through heat. The maths comes out at around 10 meters per second (22 miles per hour), and the vehicle could cover around 100 kilometers (60 miles). That would be enough to cross one of the average lakes on Titan, or to guarantee visiting a specific target from wherever it lands within a targeted ellipse.

At an altitude of two kilometers (1.2 miles), the horizon would be 101 kilometers (6e miles) away, so the aircraft could relay back to the lander, and then the lander on to the orbiter overhead. A simple camera and meteorological instruments could be fitted, and whilst GPS or compass-based navigation isn't possible, a beacon on the lander could provide a primitive means of direction-finding; even a small sun-sensing camera could give attitude information accurate to about a degree. And it need not be an aircraft. Such a vehicle may end up looking like a helicopter, a ducted-fan vehicle, or even a tilt rotor vehicle. Most exciting of all, it's small enough to be a university project on the scale of a cube-sat, with various universities building vehicles and having Earth-based fly-offs, with the winner flying all the way to Titan.

And why call it Bumblebee? Because as explained in the book Bumblebee Economics it's a trade off, in using energy to keep yourself warm, but spending energy to be mobile to go and get more energy. The economics of energy is something you have to manage if you're an aircraft on Titan, or stuck on Earth, as a bumblebee.

Lorenz then moved on to a brief retrospective of the Deep Space 2 microprobes. For those that were not around to experience them, this was a nice reminder of a mission that is now nearly 10 years in the past (amusingly highlighted by the fact that some of the slides' content originated from viewgraphs, not PowerPoint) .

Part of the New Millennium program that included Deep Space 1, Deep Space 2 was a pair of tiny hard-impacting landers called Scott and Amundsen that rode piggyback on Mars Polar Lander. At a cost of only $28 million, they were "faster better cheaper" gone perhaps a little too far. The design weighed 3.6 kilograms (7.9 pounds) in total, and included self-righting aeroshells about 35 centimeters in diameter and 28 centimeters tall. No parachutes, airbags or retro-rockets were used; the entire craft was designed simply to slam into the ground at around 200 meters per second (450 miles per hour), causing the ceramic aeroshell to smash into pieces.

The lander inside was supposed to then split into two pieces. The back part was to stay at the surface (pulling as much as 80,000 gees on deceleration!) and contained batteries (developed specifically for this mission), communications equipment, the computer, and a test of a flexible solar cell. In the middle, a "forebody" was to slow less quickly, pulling "only" 30,000 gees, and stop deeper in the ground. A flexible cable linked the two parts. The acceleration data itself would be one scientific investigation. A tiny suite of instruments in the forebody was to measure temperature and sample the soil for water content. 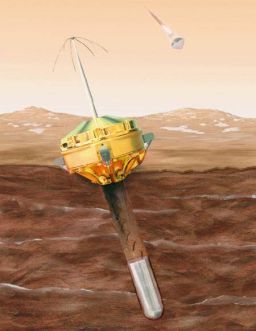 The main lesson: test, test, test. For Deep Space 2, no full-up end-to-end test, including an air-cannon test impact, followed by simulated communications, was done. This is in part because the constraint on the spacecraft's volume was so tight that there was no room for fasteners and attachments to connect the pieces of the spacecraft. Instead, they were often glued or snapped together, leaving no other means but destruction to take the vehicles apart again. Several air-canon impact tests were carried out, and a few were instrumented in ways similar to the flight hardware. However, in those tests that were instrumented, data from the probes could only be downlinked after they were dug out of the test range and disassembled. Not once was a full mission simulation -- an impact followed by testing of the instruments and radio communications -- carried out. To date, no successful hard-impacting landers have flown, but they remain an interesting and potentially scientifically valuable option for future missions for many targets in the solar system. [If you're interested in the concept of penetrator landers, you might be interested in this and this, posts from Lou Friedman on the testing of a Japanese lunar penetrator. --ESL]

For those following along at home and expecting lots of Mercury news today: sorry to disappoint, but I attended most of the Mercury talks this morning, and there was nothing new. It was oral versions of the Science magazine results that you will have seen posted on this site already. Tomorrow is the outreach day, so I have to go and get my presentation ready!