Operationally speaking, it looks like most of the last week for Phoenix was spent attempting to get a sample into the third cell of the Wet Chemistry Laboratory, without much success. In last week's update I showed an animation where you could see a large pile of stuff dumped into the hopper. Well, it appears that that material didn't fall in to the beaker, so they tried again this week, getting sample "Golden Goose 3" (I assume from the Stone Soup trench) and dumping an even more massive pile of stuff onto the hopper. There has been no official word on how this went -- all I can do is point you to an article in New Scientist that says that the soil proved too cohesive and nothing fell in. That article says "the sides of the soil [pile] looked impressively vertical, attesting to its cohesiveness." I agree with that assessment -- here's an image of the steep-sided pile from the robotic arm camera. 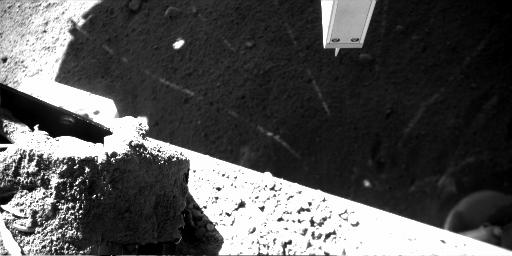 In a second attempt to get soil from the deepest "Stone Soup" trench inside the Wet Chemistry Laboratory, on sol 102 Phoenix dumped a huge scoopful of soil over the beaker. The soil was clingy and cohesive, building a steep-sided, pyramidal pile, and apparently refused to fall in.

The four images in this animation were taken about 50 seconds apart between 11:53 a.m. and 11:56 a.m. local Mars time on Sol 104, as Phoenix was capturing data for a high-resolution panorama of its landing site. The images happened to capture a dust devil marching across the plains beginning about one kilometer away from the lander. Dust devils are known to occur in this region, but none had been detected in any Phoenix images until they showed up in 12 separate photos on sol 104. The dust devil was moving westward at an estimated speed of 5 meters per second (11 miles per hour), which is similar to typical late-morning wind speed and direction indicated by the telltale wind gauge on Phoenix. This dust devil is about 5 meters (16 feet) in diameter. This is much smaller than dust devils that have been observed by NASA's Mars Exploration Rover Spirit much closer to the equator. It is closer in size to dust devils seen from orbit in the Phoenix landing region, though still smaller than those. The image has been enhanced to make the dust devil easier to see. Some of the frame-to-frame differences in the appearance of foreground rocks is because each frame was taken through a different color filter.

Two types of motion are captured in this animation, made of 67 images captured by Phoenix' mast-mounted camera on sol 94. In the foreground, the "telltale" is buffeted back and forth by winds, and in the background, puffy clouds blow by in the sky.

She explained that the relative calmness of the weather during the first part of the mission was a good thing, because they really wanted to get a thorough record of a diurnal cycle of the variation in the various parameters they study, such as temperature, pressure, and atmospheric dust. Although the temperature and pressure sensors have been recording data pretty much continuously at a rate of half a Hertz (that is, a measurement every two seconds), other instruments, like the lidar, can't be run continuously. The lidar instrument points a laser beam at the sky and watches to see how much of the light gets reflected by dust particles.

So they've used the lidar pretty much daily, but at discrete times, "to make measurements at different times on successive sols to build up, over a long period, an idea of what the diurnal cycle is in the lower part of the atmosphere." She said that the lidar can detect dust up to 7 to 15 kilometers above the surface. She also said that lately they've been making their measurements "mainly at night, because our interest is in capturing layers in the atmosphere that could be scattering from ice particles." Which is cool.

A reader had asked me to explain something he'd observed on the Phoenix weather reports on the Canadian Space Agency's website. If you look at the pressure readings, you see that they start at a pressure of 8.5 millibars on landing day, and decrease almost monotonically (that is, they almost always go down and almost never go up) from sol to sol; the most recently reported pressure, on sol 93, was 7.61 millibars, a decrease of more than 10 percent. This runs counter to what I'd expect, because I'd have thought that the warm summer weather would be sublimating the north polar cap, putting more water vapor into the air, increasing the local pressure.

Indeed, the north polar cap is sublimating, but this effect is swamped by what's happening at the other pole. In the winter darkness, the temperature at the south pole is low enough that carbon dioxide is continually freezing out of the atmosphere onto the polar cap. Water vapor is a minor constituent of Mars' atmosphere, so its fluctuations have little effect on atmospheric pressure. By contrast, carbon dioxide is the major constituent. Once you start freezing that out, the pressure of the whole atmosphere goes down. Victoria compared it to Earth -- she said that no similar process happens on Earth, because it never gets cold enough here for the major constituent of our atmosphere, nitrogen, to freeze. (That would require temperatures of 77 Kelvin, about minus 200 Celsius. Brr.)

I asked her one question I've been curious about for a while -- do they get daily weather reports from MARCI, the weather camera on Mars Reconnaissance Orbiter? She said yes, they do.

I also had a conversation with Barry Goldstein, Phoenix project manager, who in the past has been the go-to guy to explain strategic planning and anomalies on the spacecraft. There have been reports dribbling out of the mission that TEGA is encountering new problems. The official release from September 9 says the following:

As TEGA bakes samples, it identifies the temperatures at which volatile ingredients in the soil are vaporized. It also has a mass spectrometer to identify the vapors. A valve that controls the flow of a carrier gas for transporting the vapors to the mass spectrometer is no longer reliable, but researchers anticipate that the remaining samples will yield enough vaporized water and carbon dioxide to carry any scarcer vapors to the spectrometer. The team is also examining possible operational workarounds for unanticipated opening of a valve controlling flow of calibration gas.

It [began] about a week ago. TEGA has a godawful amount of plumbing. There is a series of valves. There are two gas tanks on TEGA that are upstream of the sample [that is, the gas flows through plumbing to the sample chamber, pushing it into the analytical part of the instrument]. One is the carrier gas, which is an inert gas that pushes whatever is evolved out of the oven into the mass spectrometer. When we want to flow gas through the system, we open the regulator valve and other valves and control which oven the gas goes to. Well, this regulator valve, we believe, started leaking. It's hard to tell if it's stuck or just leaky, but we can tell for sure that some of the gas was pressurizing the manifold [a pipe junction], which is where it goes after regulation valve. We use that carrier gas to run the experiment.

So we spent some time figuring out what to do about this. [TEGA team leader] Bill Boynton made a suggestion: since we know we have a good amount of water but more importantly carbon dioxide in all samples, we can use the high-volume evolved gases to push other gases into the mass spectrometer. It's not using the instrument in the way that it's designed, but we can operate the instrument in that way. We're going to try this coming weekend. We were backing off on TEGA sample acquisition until we were confident this would work.

We also discussed the new long-term strategy for Wet Chemistry Laboratory and TEGA samples. He said that they were going to get a new sample into the Wet Chemistry Laboratory today, and since that would be using up their last cell, that's it for sample acquisition for that instrument. So now they just have TEGA, which has four remaining ovens. In the primary mission, they opened an oven, got a sample, and completed the analysis before opening the next oven. But now they are going to change that strategy. The new strategy is to open the oven, deliver a sample, and do only the first of the three heating steps, then go get the next sample.

Why do this? It has to do with the declining power situation. TEGA has three heating cycles. The first and lowest-temperature one is the one that drives off the actual water ice that's in the sample, drying it out, and getting that important water abundance measurement. The other two heating cycles can wait a while. Now, those high-temperature heating cycles do require a decent amount of power -- so it would seem to make more sense for Phoenix to do that earlier rather than later.

But there are other things competing for that power, notably the robotic arm. The problem with the robotic arm is that its operations take a variable, and very unpredictable, amount of power. When it digs through loose soil it draws much less power than when it scrapes at ice, but it's impossible to predict at the start of the sol exactly what the arm will encounter as it digs, and consequently how much power the arm will need for its list of commands. So the engineers have to make conservative assumptions -- they have to assume that the arm will draw a theoretical maximum amount of power, removing that quantity from the pool for use by other instruments.

By contrast, the TEGA heating cycles draw exactly predictable quantities of power; when TEGA is being operated, the engineers don't have to build in this huge power margin for uncertainty. So the heating cycles can be delayed until days when the power is dwindling but there's still enough available to encompass a full heating cycle.

"The bottom line," Barry said, "is that the amount of energy we have to make available to the payload to do science is dwindling pretty quick. We have to keep on our toes to get the rest of the science out of our spacecraft before the sun goes down for the winter."

So that's it for this week's wrapup. Once again, I don't have much in the way of science results to share with you -- just operational details. Yesterday I spoke on the phone with an older member of The Planetary Society who'd called asking for an update on what Phoenix had discovered. He told me he'd worked on the lunar module, helped put a man on the Moon, and wanted to know if we'd discovered organic molecules on Mars yet. He said he'd been poring over newspapers, examining each issue of The Planetary Report, hoping to see news of science results, but hadn't seen anything yet, and he was very disappointed when I told him I didn't have any news about organics. I told him what I knew, about the perchlorate detection with one instrument but not another, but had to tell him there wasn't much more to say, and that the best chance for information might not be until the science team presents their first results to their peers at the American Geophysical Union meeting in early December. I do hope it's sooner than that, though!