I am way overdue with an update on the daily activities of the Phoenix lander; that whole perchlorate kerfuffle last week threw me off of my routine. So here is an attempt to do a whirlwind update of the last two weeks on the mission. To set the stage: on Mars, it is now sol 78, just two weeks shy of the end of the nominal mission. The last images I have to work with are from sol 76. (Sol 77 images are now down but they weren't yet when I started writing this update.) My robotic arm camera images page is updated to sol 76, as is my Phoenix sol-by-sol summary; as always, Mark Lemmon's SSI images page provides valuable day-to-day info. I also had a chat with Ray "Digging Czar" Arvidson to get some updates on the reasoning for all the recent digging activity, and what they're looking ahead to do.

When we last checked in with Phoenix on sol 64, it had finally successfully delivered a sample called "Wicked Witch", scraped with the scoop from the bottom of the Snow White trench, to TEGA oven 0; this is the sample that proved to have a little bit of liquid water in it, but no evidence of chlorine gas. Now let's go into a blow-by-blow summary of the subsequent sols. We're going to need a map to the work volume; I doodled all the new names on top of the map they released on sol 64.

Site names within the Phoenix work volume as of sol 76

The base map shows the Phoenix work volume as of sol 64. From sols 65-76, there was much digging at Cupboard (opened on sol 67) and Neverland (opened on sol 68) trench sites, as well as a site called Stone Soup (on sol 74) between Dodo-Goldilocks and Cupboard. On sol 75, a trench site was opened at Burn Alive. Pink text indicates the approximate locations of samples delivered to MECA's Wet Chemistry Laborator, and Green text indicates samples delivered to TEGA. The deliveries happened according to the following schedule
ol 12: Baby Bear to TEGA 4 (in oven sol 16)
ol 30: Rosy Red to WCL 0
ol 41: Sorceress to WCL 1
ol 64: Wicked Witch to TEGA 0
ol 72: Rosy Red 3 to TEGA 5 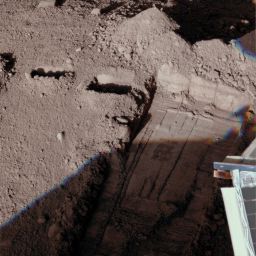 The Wonderland region of Phoenix' work volume on sol 68. The main trench is Snow White. To the left of the main trench is a small hole called Rosy Red, from which a sample was delivered to the MECA wet chemistry lab cell 0 on sol 30. To the left of that is a new spot, Rosy Red 2, from which they attempted a re-delivery to MECA WCL cell 0 on sol 66, but not enough soil was in the scoop.

On sol 69 they did more digging at Cupboard. They also tested moves of the robotic arm to do deliveries to TEGA oven 5 -- that's the one with the doors just barely opened -- and to Wet Chemistry Laboratory cell 2. Sol 70 was one of those all-night sols, doing observations of sky (with images) and soil (with TECP) to see how it changes throughout the Martian day. They still have sunlight 24 hours a day, but the Sun is getting mighty low to the north at night. Mark Lemmon tells me that as of sol 84 the team is going to "rein in our appetites for 'night' observations," presumably due to the decreasing amount of power available at night due to the lowering Sun. During these all-night observations they are also starting to look for transient frost forming on the surface. I don't believe they've seen any yet, but if you monitor the raw images page you'll start seeing a lot of isolated red-green-blue views of this spot taken after midnight. 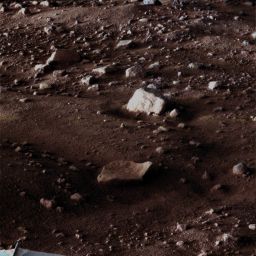 As the summer wears on, Phoenix is beginning to watch for frost to form overnight. Frost is most likely to appear in shadowed areas. This spot, located southeast of the lander, is being imaged repeatedly in the hopes of catching the formation of the first frost. This view was captured on sol 71 at about 4:15 in the morning, local time. There is no frost in the image; rocks appear white because of the contrast stretch applied to the raw images on the Phoenix website.

Phoenix continues to monitor the platy ice surface at "Snow Queen," near one lander footpad. Snow Queen appears to be cracking and breaking up over time.

On sol 72: they acquired and delivered a large scoop of soil from "Rosy Red 3" site (a surface site, between Rosy Red and Rosy Red 2 and a bit closer to the lander) to TEGA oven 5. They had to drop a pretty big pile on top of the instrument in order to try to squeeze it into the narrow opening. Not enough got inside the instrument on sol 72 for the oven to shut, and vibration on sol 73 didn't get the doors shut either; finally, on sol 74, the sample successfully got in.

In the meantime, on sol 73, they began acquiring images for the Happily Ever After Panorama (which I'll probably refer to for short as Mark Lemmon does, the "Happy Pan"). The Happy Pan will likely take the rest of the mission to acquire; it'll be like the mission success panorama, only with 10 times more data volume, more filters, less compression, and so forth. They also widened the trench at Neverland, used the robotic arm camera for more imaging of Snow Queen and Holy Cow; and took some photos of TEGA.

On sol 74, they started a new trench, in the Dodo-Goldilocks area, called Stone Soup. (Mark remarked on his website "because Dodo, Goldilocks, Upper and Lower Cupboard aren't enough names for 1/4 square meter of Mars.") Stone Soup is below Dodo-Goldilocks and Upper Cupboard. At Stone Soup, Ray said, they predict they will be able to dig much deeper than elsewhere, because it is inside the trough between the polygons. If they do manage to dig down 10-15 centimeters or so, this is the possible location for the next Wet Chemistry Laboratory sample. To my relief, the Photomerge utility in Photoshop was able to combine three images of this area taken on sol 76 to help explain the geography: 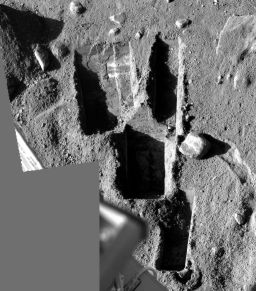 On sol 76, Phoenix photographed the area to the far left of its work volume. Four individual digging sites are visible. The upper left is the Dodo-Goldilocks trench, the first dug at the edge of a polygon. To the immediate right is Upper Cupboard. In the center is Stone Soup. To the lower right is Lower Cupboard. The rock at the upper right is King's Men; at middle right, at the end of a track, is King's Horses. The digging dump site is at the edge of the upper left corner of the mosaic. This is a mosaic of three images (combined using Photoshop's Photomerge utility).

On sol 75, they did more all-night work, and imaged the dirt piled on top of TEGA to see if it has changed. They delivered Wicked Witch 2 to the microscope. And then they started yet another trench, called "Burn Alive," in Wonderland, to the left of Snow White and nearer to the lander than the Rosy Red sample sites. Ray explained to me that Burn Alive is where they plan to take the next sample for TEGA. He said that with the sample from Rosy Red 3, they have a surface sample; from Wicked Witch, TEGA has an ice-interface sample. The goal at Burn Alive is to get a sample from an intermediate depth, a couple centimeters above the ice-soil interface. That would give them the vertical profile they're looking for.

On sol 76, they did more work on the Happy Pan, did a test pose of the robotic arm over TEGA oven 7 (getting ready for the sample from Burn Alive), and did imaging of the Dodo-Goldilocks-Cupboard-Stone Soup area (I really need a shorter name for that part of the work volume), which is what I show above. Here's an image of Burn Alive. 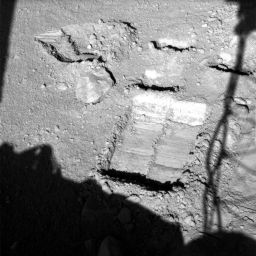 On sol 75, Phoenix began digging at a site called "Burn Alive," to the immediate left of the Snow White trench and closer to the lander than the three Rosy Red surface sample sites. This image is from sol 76. On the left of the image is the rock called Alice; to its upper left is the divot in the ground made when the robotic arm scoop accidentally slammed into the ground on sol 47. To the right of Alice is Rosy Red 2 (an aborted sample attempt for MECA); to the right of that is Rosy Red (sample location for MECA WCL cell 0). Below those is another divot, Rosy Red 3 (sample location for TEGA oven 5). And below that is the new trench, Burn Alive, from which the Phoenix team plans to acquire a sample for TEGA.

Even with all this digging at all these different sites they are still planning to try out some methods for getting that ice-rich soil sample to TEGA; he said that over the next dozen sols they're going to scrape Snow White and do some experiments with the material that they get, in particular to see if sunlight hitting the material is the culprit that makes it stick to the scoop; he said they want to try the sample acquisition in the shade and in the sun and see if that makes any difference.

One more random item: I asked Mark when Phoenix is going to see its first sunset. He said: "Center of the Sun hits the ideal horizon for the first time sol 92. That makes the first grazing ~90/91 and the first setting ~94. The true visible horizon is ~0.5 degrees higher due to the hill to the northwest (haven't checked the 0.5 deg figure that closely). That advances things by 5 sols. I haven't factored in the possibility that first setting is after midnight due to the terrain slope. We should do some midnight imaging sol 79/80 [i.e. they are planning that right now to take place overnight nextersol]. This will be nice in itself, but will also confirm the details of the timing. It is not clear which nights we'll have the ability to follow up and look for a sun set. Starting sol 84, we've agreed to rein in our appetites for 'night' observations."

There you have it, two weeks on Phoenix. Phew! Since I will be on vacation next week I'm going to have to do this again in two weeks.