Time to take my weekly census of the spacecraft exploring the solar system.

It looks like a quiet week for Cassini, which continues its stable once-per-week orbits of Saturn; it just this morning passed periapsis (its closest approach) of Rev 75, crossing to the sunlit side of the rings. With the once-per-week orbits periapsis happens on Mondays and apoapsis on Thursdays. The next scheduled close flyby of a moon doesn't happen until July 31. Looking over the recently released raw images, I see several nice multispectral sets on moons -- Enceladus, Mimas, Janus (see below), another Janus, and the Enceladus flyby set from last Monday; other than that, it's mostly rings, rings, and more rings, including a lengthy F ring movie. Also, for those of you who just can't get enough Cassini data, I have received from Björn Jónsson the latest updates to his Microsoft Access database of all Cassini images. The database now contains 169,630 images and occupies 767 MB on my computer. Yikes! That's a lot of data. And that's not even including the images -- it's just all the text and numbers describing the images. 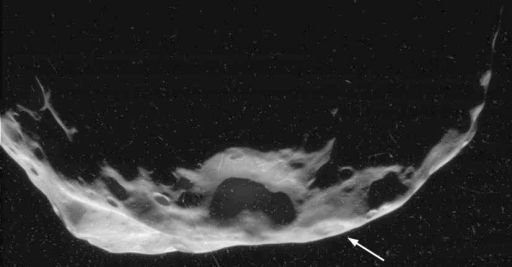 Crescent Janus with lots of noise

Janus is lit from a high angle in this view from Cassini, taken on June 30, 2008. The image is covered with specks, caused by Saturn's radiation belts. The belts are more intense closer to Saturn. The arrow points out an interesting dark-floored crater.

I goofed on last week's Opportunity update -- the panoramic view I showed was from many sols previously. The images were somewhat late being downloaded, and there were a couple of frustrating gaps in the panorama. The panorama is now complete, and below is James Canvin's version of it in all its glory -- quite breathtaking. Opportunity is now much closer to the Cape; I'll show you how much closer when Eduardo Tesheiner updates his route map (he's a little behind because there was a hiccup in the delivery of raw images to the public websites over the last week, but that hiccup is now solved, so I should be able to update you on Opportunity's trek later this week.)

Opportunity captured this breathtaking view of Cape Verde during a weeklong pause in its crawl toward the cliff. It is shown here at only half its full resolution; visit James Canvin's website for the full-resolution view.

The Mars Reconnaissance Orbiter HiRISE has some exceptionally cool image releases this week. I like "Mystery Mounds of Southern Acidalia" -- it sounds like the setting for an Edgar Rice Burroughs story. There are also images of weird star-shaped dunes and possible mud volcanoes. And one of what happens when an asteroid breaks apart before it hits Mars. Mars Odyssey THEMIS also has a star-shaped dune to offer, this one an odd, dark, isolated feature. There are funky linear features in Meridiani, and weird cell-like texture in Schiaparelli crater. There hasn't been anything new from Mars Express since I last checked.

At the Moon, Chang'e 1 and Kaguya are currently in orbit, and Venus Express is puttering along. No new releases from any of them last week. MESSENGER is cruising toward its second encounter with Mercury on October 6, 90 days away. It is 185 million kilometers from Earth and 141 million kilometers from Mercury. This week's image release shows two newly-named features, Beagle Rupes (a fault) cutting across the crater Sveinsdóttir. Also, I don't know how long this feature has been available, but I notice that there is now an RSS feed for MESSENGER's image releases, which is very handy -- thanks to JHUAPL for that!

Last week a reader pointed me to monthly updates being posted on EPOXI, which is to say the extended mission of Deep Impact. The latest update reports that they are doing some observations that will make up for science lost during an entry into safe mode last February.

ESA reported last week that Rosetta has awakened from hibernation, preparing for its encounter with asteroid (2867) Steins two months from now, on September 5. I have gotten some more information on this encounter from project scientist Gerhard Schwehm, but I may not have time to post it until after my east coast trip. Stay tuned for that.

Out in space, New Horizons is beyond Saturn, is 9.4 AU from Earth and 21.2 AU from Pluto. Voyager 1 and 2, Dawn, Hayabusa, and Stardust are all in cruise mode, talking to Earth from time to time; Genesis is in hibernation.