Time to take my weekly census of the spacecraft exploring the solar system. I wrote the Cassini part of this update yesterday but didn't have time to finish, and I've been trying to be a good girl about not working after hours -- so I'm a day later than usual, which is unfortunate because my first item was

Happy birthday to Cassini! On this day [which is to say, yesterday], four years ago, Cassini went into orbit at Saturn. The four-year mark is significant, because today is the last day of Cassini's primary mission to Saturn. It's been a phenomenally successful mission, returning many Gigabits of data (I wish they'd specified how much in the press release, because I'm sure it's a suitably impressive number). However, if you examine the science objectives for Cassini's mission, you can readily see that more data would help answer the questions better. For instance, among Cassini's goals at Titan is to "study how the atmosphere varies with time, both on short (daily) and long (seasonal) time scales." Cassini's four-year mission has not even covered one complete season at Saturn; ever since Cassini arrived, it's been summer in Saturn's southern hemisphere.

So it's a good thing that NASA has seen fit to supply the necessary funding for a two-year mission extension. The extended mission, known as the equinox mission, will take the mission through the equinox, when autumn comes to the southern hemisphere, and spring to the north; when the season shifts, the Sun will cross the ring plane, so that the southern side of the rings goes into winter darkness, while the northern side sees the Sun for the first time in a decade. The equinox is nearly upon us; the action will unfold a year from now, in August 2009. Congratulations to the Cassini mission for such a successful primary mission, and best wishes for a productive next two years, and for another extension beyond that. 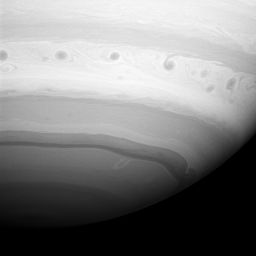 A region in Saturn's southern mid-latitudes has been producing active vortices or storms at least since Cassini's arrival in the summer of 2004, activity that Cassini has documented throughout its prime mission. This photo was taken on May 19, 2008 through a filter sensitive to infrared wavelengths at which methane gas is relatively transparent, allowing Cassini to peer deeply into Saturn's atmosphere.

On the surface of Mars, it is early winter in the southern hemisphere (Ls 93°). Today is sol 1,597-8 for Spirit and 1,577-8 for Opportunity. The southern winter solstice happened last week, so the rovers are experiencing their longest nights and longest shadows of the Martian year. Spirit is still parked on the edge of Home Plate, in the same position it has occupied since sol 1,464 (February 15), with its solar cells pointed northward toward the weak winter sun. The latest update on the Mars Exploration Rover website shows just how low the power situation is -- yet how crafty the mission has been at conserving Spirit's scant power through the winter:

To conserve energy and protect one of the on-board spectrometers, spacecraft operators have established the first major change to planning for the Mars Exploration Rover mission since the end of the primary mission, which lasted for 90 days in early 2004.

Spirit's scientists have declared that their highest priority for the winter is preserving the miniature thermal emission spectrometer, an instrument that identifies minerals in rocks from a distance. To do this, the rover heats the instrument overnight and into the morning of every sol. These heaters have been running longer as winter temperatures have dropped and are now averaging about 55 watt-hours per sol.

Heating for Spirit's batteries has increased as well and is now averaging 29 watt-hours per sol. Together, the two heaters account for 84 watt-hours or about 37 percent of Spirit's total energy usage. Everything else, including on-board computers and memories, radios, cameras, sensors and actuators, gets by on about 140 watt-hours -- enough energy to run a microwave oven for a scant 7 minutes.

In response, rover operators have further reduced Spirit's activity levels. The rover now transmits data to Odyssey to be relayed to Earth only every fourth sol. Instead of spending 20 minutes each sol using the rover's high-gain antenna to listen for new instructions from Earth, Spirit spends five minutes listening for instructions using the low-gain antenna on all but two sols per week.

Rover operators create new activity plans once a week, on Fridays, that cover seven sols at a time. Because Spirit isn't engaged in activities that require rover operators to have new images or other data for planning, the rover does not have to relay data to Odyssey just before a planning day. Despite changes to multiple procedures and software tools, the transition has been remarkably smooth.

For the time being, Spirit is basically just hanging out, charging the batteries. 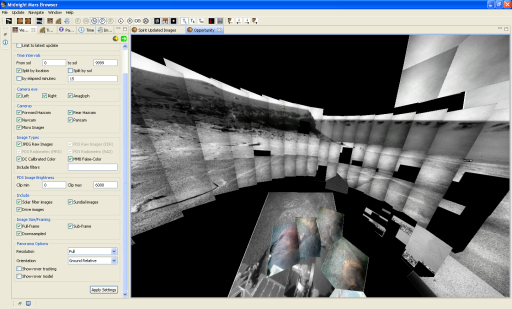 A screen capture from Michael Howard's Midnight Mars Browser software taken on July 1, 2008 shows the progress being made by Opportunity in returning the images for a full panorama from its winter solstice spot inside Victoria crater. Cape Verde is the cliff in the foreground. The Pancam team is now using only half of the detector for panoramas because of the deposition of dust on the rover optics during the dust storms of summer 2007.

The Mars Reconnaissance Orbiter HiRISE resumed its regular release schedule last week. It's tempting to highlight HiRISE images because they're pretty, but this week I'll point to one for its scientific value: it's taken of the edge of a "pedestal crater," a common type of crater on Mars that is surrounded by a liquid-looking splat of ejecta deposits. The morphology of these pedestal craters tells us something about Mars, but exactly what that is is a topic of much debate. I think many scientists agree with the interpretation that the "splat" results from subsurface water being liquefied during the impact process, but there are other theories. So images like this one are important. Also, last week was a banner one for releases from the CRISM team --three new pictures in one week, focusing on a crater near the western terminus of Valles Marineris, sulfate and water ice deposits in a dunefield in Mars' far polar north, and clays and olivine in Nili Fossae, one of the more interesting spots on Mars from a mineralogical point of view.

The theme from Mars Odyssey this week was textures. This image of varied knobbly textures in the northern plains was particularly cool. There hasn't been anything new from Mars Express since I last checked. Summer's always slow in Europe.

At the Moon, Chang'e 1 and Kaguya are currently in orbit; there wasn't anything new from either mission last week. At Venus, Venus Express is currently in orbit; there wasn't anything new released from them last week either. Their nominal mission will be over in September -- wonder if they're planning on some big release or publication associated with that.MESSENGER is cruising toward its second encounter with Mercury on October 6, 97 days away. It is 189 million kilometers from Earth and 136 million kilometers from Mercury. This week's image release shows that they're making progress on assembling the "approach mosaic" of Mercury, which covered terrain that Mariner 10 had seen previously.

Out in space, New Horizons is beyond Saturn, is 9.3 AU from Earth and 21.3 AU from Pluto. Dawn journeyed beyond Mars' orbit yesterday; the next time it will cross Mars' orbit, Mars will actually be there to meet it and fling the spacecraft onward to its encounter with Vesta. That won't be until February.Voyager 1 and 2, Rosetta, Deep Impact, Hayabusa, and Stardust are all in cruise mode, talking to Earth from time to time; Genesis is in hibernation.