Before I go in to this update, I should stop for a definition of what a "sol" is, as a friend just came up to me at a party and asked me (hi Adrian!) and I realized I had been forgetting to define it. A "sol" is a Martian day. Why not just call it a "day"? Because sols are about 40 minutes longer than Earth days, so time on Mars moves differently from time on Earth. Sol 1 on Mars is the same as day 1 of mission operations on Earth, but by the time you get to sol 36 it's already day 37. To keep things straight in mission operations, when you're talking about events unfolding on Mars you speak about sols, and when you're talking about events unfolding on Earth you speak about days. It can be tough to keep two time systems in your head at once, but many (if not most) of the men and women currently working on Mars time to cover Phoenix also have to consider Earth time -- they still have to take kids to soccer practice, celebrate family birthdays and holidays, have doctor's and dentist's appointments, and get haircuts all on Earth time. A good tool to use to compare what time it is on Mars with what time it is in your favorite location on Earth is Robert Schmunk's Mars24, a small Java application that you can download from NASA's Goddard Institute for Space Studies.

OK, so on to what happened on Phoenix sol 12. The main event was what the science team calls the delivery of a soil sample to the TEGA instrument -- what most of us would call dumping a bunch of dirt on the shiny box on the lander. Here's a couple of pictures that document the fact that their delivery was successful. 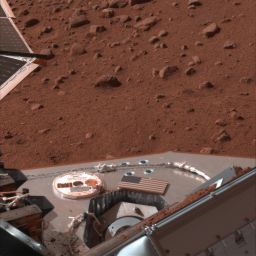 A pile of red Martian dirt on the TEGA instrument

This photo, taken from Phoenix' mast-mounted camera, shows that Phoenix successfully dumped a scoop of Martian soil onto the open doors of TEGA oven #4. Soil is piled on both sides of the oven doors. 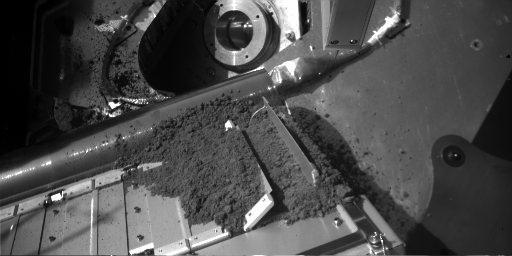 In the meantime, Phoenix is going to go ahead and grab a much smaller sample and deliver it to the Optical Microscope, and then another one for the wet chemistry lab. They'll also go on and do a bunch of other activities with the robotic arm -- more imaging underneath the lander, maybe some more digging at Dodo to see if they turn up more of that interesting white material. And, while all of this is going on, there will be a lot of worry about TEGA, which is half of what makes Phoenix a truly unique mission (the other half being the MECA wet chemistry lab).

There are a lot of questions that spring to mind about TEGA, so I will try to address as many of them as I can think of.Why did they dump so much dirt on TEGA? Won't it contaminate the other ovens?
hey grabbed a larger sample than they originally planned because of the partially open door -- they wanted to make sure they had enough sample that a good quantity would get past the obstruction. The other ovens should avoid contamination because of the way the double doors open outward. The spring-loaded doors are strong enough to open even when buried under "an inch" of dirt, according to Bill Boynton (though in that situation it's hard to imagine the oven not getting contaminated). And of course it's still unknown why that one door didn't open completely.Why on Earth do they have a one-millimeter mesh screen covering the TEGA oven? Maybe the particles are too big to make it through.
here is a very good reason for the one-millimeter mesh: below the doors, a hopper funnels sample into the actual oven, which is a quartz vial only about a millimeter wide by three centimeters long. If you allow particles larger than a millimeter to fall into the hopper, they might block the entrance to the oven.What if there are no particles smaller than a millimeter?
e already have Optical Microscope images of particles smaller than a millimeter, so they are there, don't have any fear about that.What if larger particles are blocking all the holes in the mesh?
hey thought of that already. The TEGA instrument has a vibration mechanism -- actually a separate mechanism for each oven, so if the problem turns out to be with the vibration mechanism, they should succeed when they try with another oven. The vibrations can go at slow speeds of five Hertz (five times per second, "like tapping it with your finger," Boynton said), or up to 100 Hertz, very fast. This vibration should shake the biggest pieces to the top and let the tiniest particles fall downward, just as happens with a box of cereal or a box of mixed LEGO bricks. I think that more shaking is probably the first thing they are going to try when they start their troubleshooting.Can they whack TEGA with the arm?
hat would probably be a bad idea for a number of reasons -- it might hurt both TEGA and the robotic arm, and remember that TEGA still has seven more ovens to try; there will probably never be any whacking, but if there is, it won't be until after they've tried and failed with other ovens. However, Ray Arvidson did remind the people on this morning's phone conference that when the Viking Lander 1 seismic experiment failed to deploy, they did end up trying to give it a whack with the sample acquisition mechanism, and that whack failed to do anything useful.Can they prepare the samples better?
he answer to this one appears to be yes. Ray described a couple of possibilities, where they might scoop up a little bit of sample and then try mashing it up on a flat surface, possibly even the surface of the deck, by pressing on it with the back of the shovel, to break up clods, and then re-scoop it and deliver it to TEGA.TEGA has had an awful lot of problems.
t has, and that's not good. But it's also a fiendishly complicated piece of equipment. It has way more moving parts and way more processing steps than any other robotic spacecraft science instrument I've ever heard of. It would be nice if it had worked the way it was designed to from the get-go. But, if I'd been asked which of Phoenix' instruments was most likely to have had a problem, I'd've pointed to this one, not out of any lack of respect for the team, but because what they are trying to do is really, really hard. So cut them a little slack and give them space, and time, to get this instrument working.

That's all I could think of in one session. And that is absolutely my last post on Phoenix. I have updated my raw images page to this morning (and fixed some problems in the code that were causing the display to break on Firefox), and I may possibly do another update to that page tomorrow, and then I'm gone. There's no phone conference tomorrow anyway, though there may be news on the NASA or Phoenix mission websites. And then, on Monday, I hope you'll all give a hearty welcome to the two Jims! See you all in a week.

P.S. GLAST launches in four days (if nothing else delays it), on June 11. I won't be here to blog it, but Phil Plait will be blogging and Twittering away over at Bad Astronomy.