I've gotten myself a little twisted around with the naming of these updates, so I'm instituting a new scheme: the title of the entry will refer to the latest sol for which I have data to talk about. It's currently sol 8 at Phoenix' landing site, in its morning (not quite 10:30 as I post at almost 4 pm my time); the images and information I have are for events taking place on sol 7 and earlier. Just to orient you (and me!) here's a shorthand summary of the events to date. I'll probably update and repost this list from time to time.

OK, so on to a summary of sol 7. As I posted last night, Phoenix successfully dug into the soil for the first time yesterday, acquiring a scoopful of dirt, photographing what was in the scoop, and then dumping it out without delivering any of it to any of the instruments, a maneuver called "dig and dump" by the team. The dig was performed at a site called "Knave of Hearts," slightly farther from Phoenix than the spot called "Yeti" that they touched yesterday. The scientists seemed absolutely delighted with this first scooping activity. 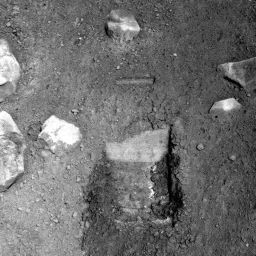 Phoenix dug its first scoop of Martian soil on Sol 7 at a site called "Knave of Hearts."

After shoveling its first scoopful of dirt from the site called "Knave of Hearts" on sol 7, Phoenix used its robotic arm camera and its batteries of red, green, and blue LED lights to shoot a photo of the soil within its scoop. The soil is red (no surprise there) but, to the right of center, there is a streak of whitish material. That streak could represent icy material but it is more likely to be salts, minerals left behind when water evaporates.

They reported progress on solving the TEGA problems today. Peter Smith reported that the TEGA instrument actually has two ion source filaments. There's a short in the primary one, but they tried swapping to the backup one last night and it worked fine. "Even though it wasn't intended to be used this way, we have the same sensitivity that we would have had with the original instrument." He said that the TEGA cover was opened but not completely retracted yesterday, and that they planned on completing that today. He also explained that once they deliver a sample to TEGA, the analysis is a four-day process -- and not necessarily four days in a row. They acquire the sample on the first sol. They take one measurement at a low temperature on the second sol. Then they do a higher temperature on the third sol, which drives off much of the water. (Water, he said, swamps all the other materials in the first analyses.) Then on the final day they go from low temperature all the way up to 1,000 degrees Celsius (1,800 Fahrenheit), "enough to drive gases out of even the most recalcitrant soils."

Finally, the team was asked if they were surprised at finding ice so close to the surface. Ray responded that they weren't particularly surprised -- it's what they planned to find -- but he said, with emphasis and relief, that they were not surprised, but were glad to have found what looks like ice so easily. However, he cautioned that they haven't concluded yet that Holy Cow definitely is ice; it could still be an exotic deposit of salt. He pointed out that "We're sitting on the ejecta deposits of a rather large, fairly fresh crater." (Heimdall.) "That impact process probably involved fluids. So we may be in a unique environment that led to a fair amount of cementation or ice close to the surface. In my mind I'm still carrying two hypotheses. It's likely it's ice [Holy Cow that is] but it's not impossible that we're looking at a massive amount of salt."

Just for fun, here's a three-frame animation of the first dig site. There's a little twisting between frames so they're not perfectly aligned, but one thing that's interesting to see is how the digging action evidently shoved some of the non-contacted soil above and to the sides of the trench upward and outward.

Three frames from Phoenix sols 5, 6, and 7 show the site of the first touch and first soil sample.

On sol 7, Phoenix retracted the protective cover over the eight sample collection ovens of the TEGA instrument, an activity that was documented by the robotic arm camera. Note that during this activity, the arm seems to have spilled a clod of dirt onto the deck of the lander above TEGA.