Yesterday, robotic arm camera lead scientist Horst Uwe Keller gave some detailed descriptions of what he could say for certain about the possible ice image, of the area now called Holy Cow. Here's a rough transcription: "It's like you go down and look through your legs, so the image when it came back was upside down." (If you look for the image on the Phoenix website, that is indeed what you'd see; I flipped it before posting it.) "What we see is astounding." Going on to explain the geometry of the image, he said, "We see the illuminated surface of the soil; you can see shadow of leg struts on surface, and in foreground you see dark, shadowed ground underneath the lander in shadow. A large part of the surface is uncovered by the exhaust of the thrusters. It is tabular, shiny, and smooth, and this is a strong indication that we are looking at the icy table just covered by a few centimeters of soil. The thrusters during the landing uncovered this part. And you can see some downgrade from the footpad to the center of the image. At the top of the image you can see three thrusters, which were used during the landing.

"The purpose of this image was to look at the third leg." They wanted to get good photos of each leg sitting on the soil, to make sure that it was not unstable (for instance, it could be perched on a rock or at the edge of a ledge) before doing a lot of robotic arm motions. Uwe continued: "If you follow the shadows of the legs, you can see that the shadow is bent, strongly indicating the gradient in the surface. The soil is several centimeters higher than the smooth whitish surface, clearly indicating that the surface is uncovered by the thrusters. The fact that you see relatively large parts being flat indicates a table of ice. So wherever we will be digging, we will hit ice after uncovering a few centimeters of soil."

They did not take new images of Holy Cow yesterday. There was a possible imaging opportunity included in the plan, but it was lower priority than other activities and ended up being skipped because the robotic arm was "oversubscribed" for activity yesterday, Dave Spencer (surface mission manager) said. They still have plans to take images of Holy Cow at some point, using many different exposure settings so as to build up a composite image in which nothing is overexposed, but they aren't sure yet where that's going to fit in to the schedule. Uwe said that they would definitely continue looking at the spot repeatedly throughout the mission as time allows, looking for changes to the icy surface. It's possible that the ice could start to sublimate (turn to gas, so the ice surface would retreat downward), but it's also possible that there could be net accumulation of ice; apparently it depends on how windy it is at the landing site.

What they did re-image yesterday was Snow Queen. Snow Queen is the platy stuff they saw near the second foot image they took on sol 4. Here's one of the new images, which is closer-in than the sol 4 view: 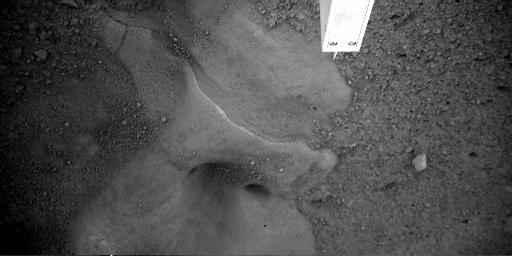 Snow Queen as seen on sol 6

Phoenix took a second set of images of the target called "Snow Queen" on the sixth day of its operations on Mars. This image was part of an attempt to gather information on Snow Queen's color, but the robotic arm camera could not get close enough for its colored light sources to provide good signal to the camera detector.

Another thing they did with the arm yesterday was a test touch in the soil. Here's an image of the imprint of the arm in the soil. When I look at this image, I can't make the imprint of the arm go "down" as it should; in an optical illusion common on space images, it appears to be "up." Fortunately, they took two images of this imprint, from the camera's two eyes, allowing the creation of a stereo image. This is crossed-eye stereo -- cross your eyes until the two images overlap, and move your face back and forth until it snaps into 3D focus. Don't do that for long, though, as it'll give you a headache; and I recommend you close your eyes and look away from your screen after in order to pop your focus back in place.

On the sixth day of its surface operations, Phoenix touched the Martian soil with its robotic arm for the first time. The imprint of its digging scoop looked like a footprint to the science team, so the spot is now named "Yeti." The two images were taken through the mast-mounted camera's left and right eyes, giving stereo information (cross your eyes to see it in stereo).

They are still working out the problems with TEGA. Dave Spencer said that the TEGA team is pretty confident that the workaround that they have developed will work, and if it doesn't, they have a few other gambits as well. So they are going ahead with other activities that involve TEGA. Today they will be opening the cover of TEGA, and documenting the fact with images from the Robotic Arm Camera. Spencer explained that TEGA has a cover for the whole instrument, and then each of its ovens have individual covers. The interesting news from today is that they can go ahead and deliver that first soil sample to TEGA, as was in their initial plan, and then TEGA can hold on to the sample "indefinitely," until the troubleshooting of the ion source problem has been completed.

Someone asked if the Mars Descent Imager (MARDI) -- which was not used during Phoenix' landing -- could be used to image Holy Cow. Dave Spencer answered that he wasn't sure it would be possible, as he didn't expect that MARDI could be in focus at that distance. But he's wrong about that; here's an image taken by MARDI on Earth, which shows you how well it can focus on text located just centimeters from the camera. 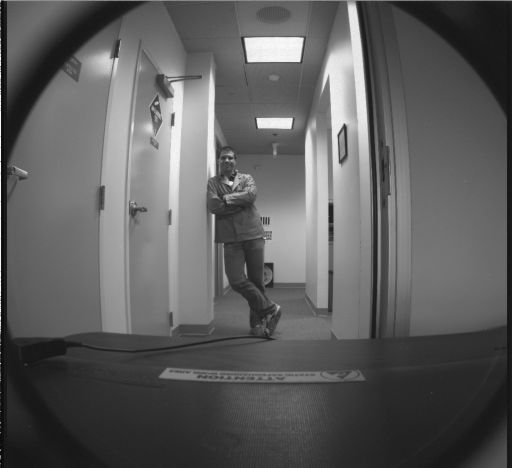 This photo was taken from the Mars Descent Imager (MARDI) built for Phoenix, during its testing. MARDI was not turned on during Phoenix' landing, but the instrument should be healthy.