So I anticipated last night two of the main messages of today's press briefing: the completion of the initial reconnaissance panorama, which was taken in only one color and at a quarter the full resolution of Phoenix' camera, and the successful unstow of the arm. Here's their better-quality version of that first panorama.

Phoenix captured this panoramic view of its landing site during its first three sols of surface operations. Becuase sections of the mosaic were taken at different local times of day, there are visible boundaries between segments of the panorama; one goal of the mission will be to acquire full panoramas with consistent lighting. The panorama has north at the extreme edges and south at the center. The meteorological mast sticks up against the sky to the southwest, and the digging scoop on the newly deployed robotic arm blocks out some of the view to the west. This panorama was captured in one color, at a resolution 25% of the capability of the camera system. Therefore, a full, three-color panorama, to be completed over the next few weeks, will contain almost 50 times as much data as this one.

The next major news was the safe deployment of the robotic arm. Here's an animation of that process, which I was able to put together from the raw images on the Phoenix website, actually from the useful zipped-up batch-downloadable versions from James Canvin's website.

In this six-frame animation taken on sol 3 of Phoenix' mission to the north polar regions of Mars, it successfully unstows the elbow joint of its robotic arm from its launch restraints. First the "forearm" tips up at the elbow joint, then the arm raises slightly at its shoulder joint (off the image to the lower right), then it pivots slightly at the shoulder joint to bring it free of the bio-barrier, the metallized fabric that covered the sterilized arm to protect it from contamination as it was being integrated onto the lander. The bio-barrier had not quite deployed completely, so a small fold of it was covering the elbow joint, but Phoenix had no difficulty swinging the elbow free.

Then there are several things they'll have to do before they can touch the ground. The first thing is to evaluate the lander's stability. The lander has three footpads, only one of which has been photographed to date. The other two are invisible from where the mast-mounted camera sits, so the only way to image them is with the camera on the robotic arm. One of them they can see with the robotic arm out in the air, but to see the third foot, they will need to snake the arm underneath the lander. But they'd better not try to do that before they take a look underneath the lander to see if there's a big rock under there. It's not likely, but it would be lousy to find a rock by bashing the arm into it. So they are going to poise the arm below but outside the lander, in an area they've imaged already, and check. I asked during the Q and A segment whether they plan to use the arm camera for stereo imaging. The arm has only one camera, but you can pretend it has two eyes by taking one image, then shifting the arm slightly to take a second (I do this trick all the time with my own digital camera to get stereo images; see my post on the MSL "scarecrow" rover to see a couple of those). Peter Smith said yes, they do plan to do that, and they have a visualization tool that makes it easy. Anyway, all of this arm-moving activity is going to take several days. Things are going great but they did lose a day of arm activity because of the Mars Reconnaissance Orbiter communications snafu (which doesn't seem to have been solved yet, or at least they didn't report that it was solved this morning), so we're still looking at early next week for the first soil touch to take place.

Here's an animation of the other unstow event. Since Phoenix is a sessile lander, the major motion events to make animations of will be these arm movements. I think they're pretty cool.

This four-image animation documents the successful "unstow" of the digging bucket at the end of the Phoenix lander's robotic arm. The first frame shows the bucket in its stowed position. Then it tips back to allow a hooked pin to slip free of its catch. Then it returns to its stowed position. Then it disappears, as the elbow joint (off the image to the left) tips the bucket upward and out of the frame.

Peter Smith showed a map of the workspace, with some of the names that I mentioned yesterday labeled. They're going with a theme of fairy-tale characters and folk tales to name the rocks, soil patches, topographic features, and other stuff within the robotic arm's workspace.

Phoenix' 'workspace' as of sol 3

This is an area with which the Phoenix science team -- and fans of the mission -- will become incredibly familiar over the course of the three- to six-month mission: the area of soil in which the robotic arm can work, otherwise known as the "workspace." The mission has chosen the theme of folktales and fantasy for names for the features in the workspace, and they anticipate using 100 to 200 such names over the course of the mission. The sizes of the named rocks are
ing's Men: 21 cm (8.5 in)
ing's Horses: 14 cm (5.4 in)
eadless: 13 cm (5.2 in)
n as-yet-unnamed rock to the left, that appears to have scooted across the ground (probably as a result of the blast of the landing rockets), is 12 cm (4.8 in) across. The area to the right of the purple line, called "National Park," will be left undisturbed until the science team has thoroughly mapped out the intended use of every patch of soil. The area to the left of the National Park will be where they touch soil first and test out the digging.

Mark also explained the plans for the upcoming imaging campaign: they are going to start taking more color data, at higher resolution, possibly even in stereo. They are also beginning to identify high-priority targets for detailed images. I'm sure they'll image each of the visible large rocks at high resolution, and also the backshell and parachute.

Last but not least, Jim Whiteway gave a weather report, stating that the Canadian meteorological instrument is working great, and that the lidar it uses to analyze the opacity (dust content) of the atmosphere is up and running. He said they've observed dust lofted up to heights of three kilometers. I've just added the Phoenix Weather Widget to my iGoogle page, and it tells me that the weather report for sol 2 (I'm guessing the two-sol data lag will be common, because they take the data one sol, return it the following sol, and have it processed and ready for posting online on the sol after that) was the same as for sol 1: min and max temperatures of -30 and -80 Celsius (-112 and -22 Fahrenheit), sunny, with light dust.

One of the cutest features of the meteorological instrument is a little telltale mounted on top of the tall meteorological mast. It blows back and forth in the wind on Mars. A tilted mirror below the telltale shows which direction the wind is blowing, and how far the telltale has been blown off of vertical; it also shows the sky color directly above the mast, and as you can see, it's darker than the color of the sky closer to the horizon (same as it is on Earth, for the same reason; near the horizon, there's a longer path through the atmosphere, more space along which air molecules and dust can scatter light and make things look brighter). I asked Whiteway how to interpret the telltale images, and he told me that the Sol 1 image showed that the wind was blowing at about 15 miles per hour (24 kilometers per hour), and blowing the telltale toward the northeast (toward the lander). I took that Sol 1 image and annotated it below; I very much hope that I have not messed up the labels showing the directions. Note that if the telltale is being deflected toward the northeast, then the wind is out of the southwest. 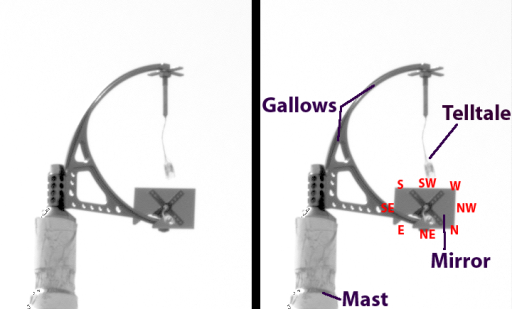 One of the science instruments on Phoenix is a device to measure wind speed. Mass and power constraints prevented a sophisticated anemometer from being included in the Phoenix science package, so instead the Canadian meteorological team included a tiny passive telltale that swings in the wind from a gallows at the top of the meterological mast. Wind speed is measured by taking a photo of the telltale and interpreting its deflection. The interpretation is aided by a small mirror positioned directly below the telltale, which shows the camera which direction the telltale has moved, and how far it is blown away from vertical. The mirror also shows the color of the sky at the zenith.

Since there were very few questions from the press, I decided it shouldn't offend anybody to take the time to thank the Phoenix team for so openly sharing their raw image data with the international community of space enthusiasts on the Internet. He replied that "Involving the world in this mission is one of my highest goals, and the way to do that is not hold on to data, but to put it right out on the Web so that the world can enjoy it as we do." Good man.