I'll admit, I'm pretty tired, so the best I can probably do now is post some notes from the briefing and then go to bed...

At the press briefing, they started by replaying some of the video shot in mission control -- primarily for the benefit of the people on the panel, who had, perhaps, not seen how they looked on camera yet.

It's a huge panel. The Administrator -- Mike Griffin, NASA's chief -- Ed Weiler, who recently replaced Alan Stern as the head of the science mission directorate -- Charles Elachi, head of JPL -- Peter Smith, project scientist -- Barry Goldstein, mission manager at JPL -- Ed Sedivy, project manager from Lockheed Martin. Many of the guys who were in the Mission Support Area are in the back of the room, which is utterly full of press folks.

Smith said such pithy things as: "I know it looks a little like a parking lot, but that's a safe place to land. That makes it exactly where we want to be. Underneath this surface, I guarantee there's ice. You can see lots of pebbles, and soil, and all these troughs you see in between the polygons. These are probably about 15 feet [5 meters] across."

"This is probably the cutest polygon that I have ever seen...."

They showed a color image! Smith mentioned later that they got so much data down that the team is scrambling now to stuff more images into the sol 1 sequence, and he's not sure what they have planned yet. But he also said they don't plan on posting a color mosaic right away. Instead, he said, "The mosaic we'll leave that to the hobbyists at home to put together. There's a lot of people who really enjoy doing that, I understand." So there you go, you image hobbyists -- he's giving you carte blanche to assemble the photos yourself. And then post them to unmannedspaceflight.com, where we'll all ooh and aah over them! If you'd like to learn more about the camera, check out the Texas A&M website.

Getting back to Peter Smith's comments at the briefing... "All of the images are still outside the digging area. We have not yet seen what's in front of the digger. Is this what we will see all the way around? We don't know. Over the next few days we will get it all in.

"This is a scientist's dream, right here, on this landing site."

Barry Goldstein picked up from there. He showed a map of the approximate location, red circle: 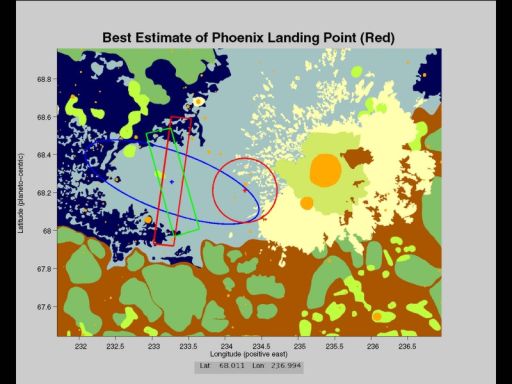 For what it's worth, a reader tells me that this HiRISE image is dead center on the current best estimate landing site.