Now that asteroid 2007 TU24 has passed harmlessly by us, we should turn to consider again 2007 WD5, the near-Earth and then near-Mars asteroid. When we last caught up with WD5 on January 10, the chances of a Mars impact had dropped to 1 in 10,000. This is not zero but is low enough that the Mars missions that had been considering performing observations related to WD5 dropped those plans and returned to business as usual. Since then, it seems that loss of interest, coupled with WD5's rapidly decreasing brightness, has resulted in there being no new observations of it to track its path. 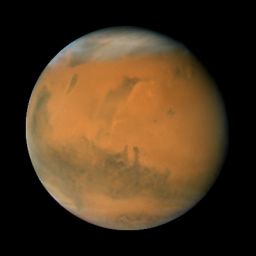 The Hubble Space Telescope took this photo of Mars during its 2007 opposition, when it was about 90 million kilometers from Earth. This view was captured on December 7, 2007 and is centered at a longitude of about 140 degrees. Since then, Earth has begun to pull ahead of Mars, and is now 25 million kilometers farther away. As a result, the photos to be taken of Mars over night will be smaller.

Finally, on this site you can see that the three images in Noll's request will be taken through different filters, F410M, F502N, and F673N, with Mars centered in the Planetary Camera (PC) field of view. Those numbers indicate the central wavelengths of the filters in nanometers -- 410, which is a pretty short-wavelength blue, 502, which is in the green range, and 673, which is in the red range. The PC is the highest-resolution of the cameras on WFPC2, and should show Mars' disk at about 270 pixels across. At that size, if WD5 is close to its predicted position with respect to Mars, it should pass about a thousand pixels away from the center of the planet. (For the handful of readers who are very very familiar with how the WFPC2 works, I'll mention that would lie off the PC chip, which is only 800 pixels square; it'd be on one of the Wide Field chips somewhere, which have lower resolution. You can read more about how WFPC2 works here.)

So we should wind up with a nice red, green, blue color image of Mars, with, hopefully, a tiny little dot off to one side of the disk that represents WD5's position. The scientific value of the observation is that it'll help constrain WD5's future course. But I'd say the observation is justifiable just on its coolness value.

Thanks very much to Ted Stryk for the heads up!