Yesterday the CRISM team on Mars Reconnaissance Orbiter released an interesting animation of changes in the south polar cap on Mars. Every Martian year, as the Sun returns to the south pole, the seasonal deposits of carbon dioxide frost and ice sublime, thickening the atmosphere and causing interesting changes to the landforms there. The defrosting produces dark surface deposits, which fan from point sources on the polar cap. No one knows yet what produces these fans; they could emanate from places where the surface is already exposed to the atmosphere, or they could be produced in geyser-like eruptions from beneath the carbon dioxide cap. Winds blow the dust into fan shapes; which direction the fan points depends upon which direction the wind was blowing at the time. Fans sprouting in different (and sometimes multiple) directions from each fan source indicate, first, that the wind direction is variable with time and, second, that different fan sources are active at different times. Before I show you the CRISM stuff, let me re-post a view of these things from HiRISE, so you know what you're looking at. I wrote more detail about these last April. 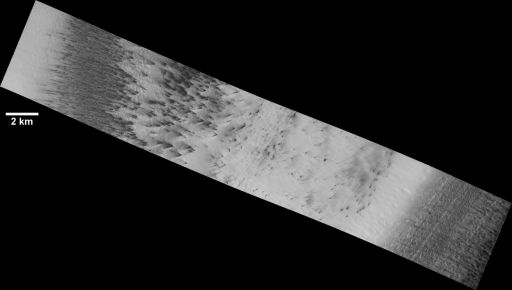 This image was captured by Mars Reconnaissance Orbiter's HiRISE camera on April 1, 2007 and is shown here at 10 meters per pixel, 1/20 its full resolution. 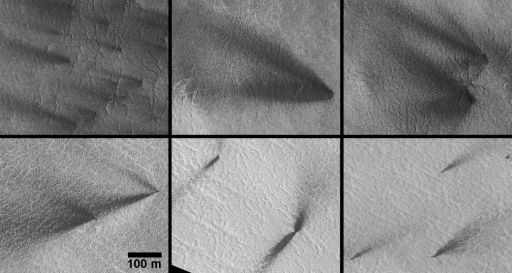 Dust fans located close to each other on Mars' defrosting south polar cap sprout in many different directions, indicating multiple fan-formation events at different times as the wind blew in different directions. These six images are all shown at the same scale (1 meter per pixel).

OK, so much for what human eyes would see. CRISM's much more capable than human eyes, and the team has presented the same animation in false color, giving us compositional information:

The first three frames all look pretty similar. You can see that the whole surface is bluish to magenta-ish, meaning that there's carbon dioxide everywhere. In the second frame, according to the CRISM team, "you can start to see color variations in the fans," but what variations there are are pretty subtle, and may have been erased by the loss of color information that happens when you convert a color image to GIF format. But in the third frame, you can really see these color variations starting to pop out. In particular, where there are new bright fans on the slope in the visible image, you see lots of new magenta deposits in the infrared image. That's carbon dioxide. And the dark fans have taken on a distinctly green color; that's water ice. And again, the final frame, which comes roughly two Earth months after the third frame, looks very different. But because we now have compositional information, you can see that the slope is brighter because of fresh deposits of magenta stuff -- carbon dioxide -- while the new deposits in the flatter areas are dominantly green. However, wherever there are new super-bright white fans in the visible image, there are new magenta fans in the infrared image, showing you that those bright fans are dominantly composed of carbon dioxide.

Thankfully, the CRISM team has provided an interpretation for all these changes. They say: "CRISM science team members working with these data believe that they are seeing evidence for a process first proposed based on data from the Thermal Imaging System (THEMIS) instrument on Mars Odyssey. In this hypothesis, sunlight penetrating the ice warms the underlying soil and causes carbon dioxide frost to vaporize at its base. At first the gas is trapped under the frost; when it is released, the expanding gas cools and part of it refreezes to form carbon dioxide frost in the magenta-colored fans."

Interesting. I'm looking forward to seeing other time-series from both CRISM and HiRISE -- they remind us that Mars is actually quite a dynamic place. However, time-series come at a cost. This animation consisted of four observations. All four of them were pointed at the same spot on Mars. The CRISM team could instead have used the data volume for the three repeat observations to take data on three other places on Mars that might never otherwise be covered by CRISM; the instrument will acquire a global map at reduced spectral and spatial resolution, but the 20-meter resolution, full spectral resolution bits will just cover a small fraction of Mars. So this kind of repeat observation is costly in terms of science, and the team has to choose carefully which landscapes are worth revisiting.