Genesis was a space mission that collected samples of the solar wind and returned them to Earth. It was to enter Earth's atmosphere and, after deceleration behind a heat shield, open a parachute; then, in a stunt worthy of an action movie, a helicopter pilot was supposed to snag the parachute in midair, reeling in the return capsule and gently carrying it to ground. Infamously, the parachute failed to open, and the return capsule slammed into muddy soil. Many of its preciously pristine collectors were shattered upon impact, and dirty desert air leaked inside the capsule. Still, scientists expressed hope that the samples were recoverable, and indeed they proved to be mostly intact -- though their recovery would take much more effort than had originally been planned. 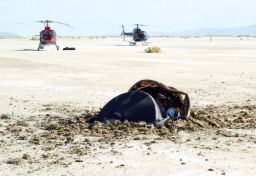 There hasn't been much news about Genesis since then. Periodically, I get a question from a reader, asking me if there were any results or if the crash landing ruined the samples, and I haven't had much to say. Well, while trying to work my way through a backlog of magazines the other day, I stumbled upon a publication in Science from October 19 on a significant result from Genesis: "Constraints on Neon and Argon Isotopic Fractionation in the Solar Wind," by Alex Meshik and a pile of coauthors.

One of the main reasons this wasn't big news is that it is rather difficult to explain, but I'll give it a shot. For those of you who haven't taken chemistry or physics since high school (if at all), I should talk a bit about what isotopes are before I continue. Every element is distinguished from the other elements by a unique number of protons in the nucleus of its atoms. Nitrogen atoms always have seven, oxygen eight, argon has eighteen, and so on. But atoms of the same element may have different numbers of neutrons. For example, hydrogen most often has no neutrons, but sometimes its single proton is accompanied by one neutron, and, more rarely, its proton is cozy with two neutrons. Each of these is a different isotope of hydrogen. These isotopes of hydrogen are often described by new names -- one-neutron hydrogen is called deuterium, while two-neutron hydrogen is called tritium -- but for heavier elements, a shorthand is used. For instance, I'll be talking below about argon-36 and argon-40, which is the shorthand for "argon, the 18-proton element, with 18 neutrons" and "argon, the 18-proton element, with 22 neutrons". Scientists might also write these as 36Ar and 40Ar.

Why do we care about isotopes? Most of the time, all the different isotopes of one element participate in chemical processes in the same way, but some processes favor lighter isotopes over heavier isotopes or vice versa. One process that tends to fractionate different isotopes is the evaporation of water. Evaporation happens when some molecules get energetic enough to fly free of the liquid. Not all the molecules have the same amount of energy -- some are more energetic than others. If a water molecule includes an atom of the heavy isotope of oxygen -- oxygen-18 -- it needs more energy to escape the liquid than a lighter water molecule made with oxygen-16. So when you evaporate a lot of water (like when Earth's atmosphere heats up), the oceans will be relatively enriched in oxygen-18. Sedimentologists who cruise around on boats digging up cores of deep-sea sediments analyze the oxygen isotope compositions of the sediments; the ratio of oxygen-18 to oxygen-16 is a very sensitive paleo-thermometer useful in reconstructing past climate. Other types of isotope fractionation operated in the extreme conditions under which the solar system formed, so isotope ratios in the compositions of the Sun, planets, and meteorites represent key information to the history of that formation process.

Okay, back to Genesis. The questions Genesis was seeking to answer were: (1) What is the composition of the solar wind? And (2) is that composition the same as the composition of the nebula from which the Sun and all the planets, moons, asteroids, comets, and dust in the solar system formed? That is, has there been fractionation of solar isotopes? The first question, what the composition is, is straightforward to answer if you send a spacecraft out to collect solar wind particles for a few years and then return them and analyze their composition -- and, if you can, don't let any Earth material contaminate your collectors. Crashing the collectors into a mud flat isn't a good idea.

The first piece of news I can report from the Meshik paper is that the samples they analyzed appeared to be uncontaminated by Earthly material, despite the crash landing. They supported this claim by analyzing the quantity of an isotope of argon present in their samples. Most argon in the Sun is argon-36, and this was (scientists assume) the most abundant isotope of argon in the presolar nebula. But, for reasons I won't go into here, Earth and most of the other planets and moons lost most of their initial noble gases, so there's not much argon-36 here. However, a different isotope of argon, argon-40, is produced in abundance on Earth by the decay of a radioactive isotope of potassium, potassium-40. So Meshik and his coworkers measured the isotopic composition of the argon in their samples, and they found that there was no enrichment of argon-40, so they concluded that their samples were free of Earthly contamination. Good news. 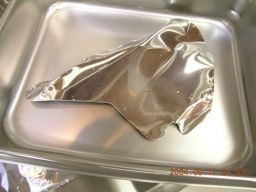 This twisted piece of aluminum was used by the Genesis spacecraft to collect samples of neon and argon from the solar wind.

The paper just covered two elements, argon and neon. As such, it's just a progress report; there should be many many more Genesis results to come. But the progress is good; it seems that Genesis data can be used to figure out the composition of the Sun, and that composition doesn't seem to vary from point to point within the Sun. That means either that all processes that happen on the Sun fractionate neon and argon isotopes in the same way, or that there isn't much fractionation going on. The first one seems less likely, but it's possible. The second one is more exciting: if true, it seems promising that we can use the measured composition of the solar wind as a starting point for our models of how the solar system was born.

There. I hope this made some sense! 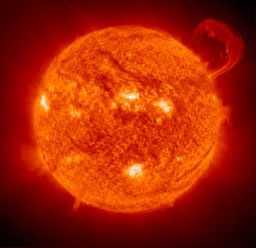 Extreme ultraviolet image of the Sun


OHO captured this image of an enormous coronal mass ejection erupting from the Sun on September 14, 1999. The view is at a wavelength of 304 angstroms (30.4 nanometers), in the extreme ultraviolet, and shows the Sun's upper chromosphere at a temperature of about 60,000 Kelvin (110,000 Fahrenheit).