Planetary Society Director of Projects Bruce Betts and Executive Director Lou Friedman were both in attendance at this week's International Conference on the Exploration of Phobos and Deimos, and Bruce just sent me this report. --ESL

Along with Lou Friedman, I've been attending the First International Conference on the Exploration of Phobos and Deimos at NASA Ames Research Center this week. The conference has been all about Mars' small moons, and current and hoped for missions to explore them. The conference was convened by Pascal Lee of the Mars Institute and a number of other Areolunophiles (ok, I just made that word up). 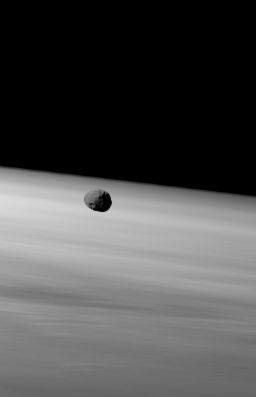 Phobos below the Martian limb

In this image, taken on January 22, 2007 on Mars Express' 3,909th orbit, Phobos floats just below the Martian limb. Phobos is the larger and inner of Mars' two moons. Likely a captured asteroid, it is significantly darker in color than Mars. The image has been enhanced slightly to bring out details on the moon.

Spectroscopically, Phobos doesn't look like Mars, and does look like some outer main belt asteroids. So, at first it would seem like "game over" for all but the captured asteroid theory (and it is still my favorite). However, since remote sensing instruments like infrared spectrometers only see the very upper surface of the moons, there are arguments that in-falling meteoritic material from the asteroid belt could coat the moons.

It is also still debated if there might be subsurface volatiles on the moon, e.g., water or water rich minerals. Observations show their surfaces to be very dry, but they same types of uncertainties arise about the interiors.

Some nice Random Space Facts about Phobos and Deimos from the meeting:

Following the summaries of past science, some new data were presented at the conference, both from ESA's Mars Express High Resolution Stereo Camera (HSRC), and from NASA's Mars Reconnaissance Orbiter CRISM instrument. HSRC has imaged much of Phobos and hopes fill in the gaps when Mars Express starts modifying their orbit, but that will be after the Phoenix landing next May since they'll use their current orbit to support Phoenix Entry, Descent, and Landing. CRISM continues to find Phobos' and Deimos' surfaces to be very dry, and to find two spectral units on Phobos: one associated with the big crater Stickney. 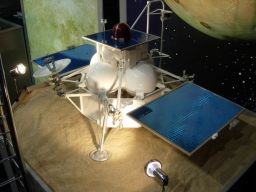 Displayed at the 2007 Paris Air Show at Le Bourget.

There were also presentations about various possible instruments to study Phobos and Deimos, related science topics like the radiation environment near Phobos and Deimos, and Canadian and U.S. mission studies of possible future Phobos or Deimos robotic missions.

Another piece was introduced on the second day: a discussion of possible future human missions to Phobos or Deimos. Mixed into this were also presentations about missions to near-Earth objects, which also could be applied to Phobos or Deimos. All these missions more resemble docking missions than landing missions because of the very low gravity of these bodies. Among these, it was argued that the Constellation hardware currently planned by NASA could, with small adaptations, could support at least NEO missions, and perhaps Phobos/Deimos.

Perhaps surprisingly, missions to Phobos or Deimos would require less delta v (change in velocity; which basically converts to how much propellant you need) than missions to the surface of the Moon. However, your mission duration is two to three years in deep space. Why do such a mission? Among other reasons, people argue it is a lot easier than a Mars surface mission, eliminating many of the hardest parts (but not all), a good test of a Mars system (a la Apollo 8 or 10), and you get good science at these enigmatic moons and a great location to observe Mars. It will be interesting to see how future exploration of these bodies unfolds, and how our understanding improves.