Since I only spent two days at the Division for Planetary Sciences meeting in Orlando, I missed three days' worth of presentations. Darin Ragozzine, a graduate student working with Mike Brown and part-time worker for the Society was there and just sent me these notes. Thanks Darin! -- ESL

I must apologize about this "old" news of talks at the Division for Planetary Sciences in Florida, October 10-12. Hopefully, Planetary Blog readers will still find the following highlights interesting. Do feel free to contact me with questions (through Emily). As you'll see, I started with the hottest of planets and will end with the coldest.

ednesday morning started with a session on extrasolar planets. One interesting discovery is a Spitzer space telescope measurement of the hottest planet (HD 149026b) which has been identified at a scalding 2,200 K or so (about 1,900 degrees Celsius or 35,00 degrees Fahrenheit). At this temperature, you can have titanium clouds forming, which really makes you wonder what these hot Jupiters would look like if you could see them up close. (Some simulations of that are shown off at the highly-recommended extra-solar planet blog Systemic.)

then jumped over to the session on asteroids. Spitzer has really opened our infrared eyes, detecting photons from extrasolar planets, measuring spectra of asteroid belts around other stars, and probing the early universe for galaxies and other cosmologically interesting phenomena. And sometimes you get more than what you're looking for. During one of these cosmology surveys, Spitzer would look at the same place in the sky several times, which is also a great way to find asteroids: they're the objects that move between successive images. (This on-the-sky motion is mostly due to motion of the Earth and the parallax effect; Earth moves faster than most asteroids.) It happens that, at their surface temperatures of roughly 200 Kelvin, asteroids glow in the near- and mid-infrared where Spitzer is looking, so Spitzer actually has the potential of seeing asteroids that are quite hard to see from the ground because they are so small and faint. Using this method, Bidushi Bhattacharya and her colleagues have identified dozens of asteroids from Spitzer; many of them are new. Most are in the main belt but some are Trojan asteroids (orbiting along with Jupiter), and many more are to come in the future. I think it's so cool when you can mine data taken for a totally different purpose (cosmology) and do something unique and interesting.

erek Richardson gave a talk on behalf of Patrick Michel on the most recent addition to asteroid collision simulations: now they are able to realistically model the shapes and spins of the hundreds of fragments created when two small rocky worlds collide. Before this, they were focusing on the dynamics and general outcomes of these impacts, but now they've added this new physics. I must say, that the movie that he showed was one of the coolest scientific animations I've ever seen. Derek is known for very professional looking animations (check out his webpage), but this animation was super-cool.

thers are working on asteroid mapping using Hubble data as well as Adaptive Optics imaging from large ground-based telescopes. For many medium-size (~200-kilometer) asteroids, we now have a pretty good handle on their shapes. For the largest asteroids, Ceres, Vesta, and Pallas, we not only know their shapes, but also are starting to detect albedo variations (bright/dark spots) on the surface. Presumably all asteroids have such albedo patchiness, but for smaller asteroids, you pretty much can't disentangle the effect of albedo from shape, so it will be a while before we know what they really look like.

ater in the afternoon, Robin Canup gave a talk with more details about the formation of the Moon. She's an expert in the field and has been doing new simulations using Smoothed Particle Hydrodynamics (which also yields nice movies). Up until now, Moon-forming impacts have been modeled by a collision between a nearly Earth-sized body and a Mars-sized body, both not rotating. In this most recent study, she's added the effect of spin and finds that you can only make the Moon and the Earth have the right sizes and orbits ( i.e. angular momentum) if you start with the Earth initially spinning backwards (called retrograde) or not at all. If it's starts out spinning the same way it's spinning now (called prograde), then the Moon comes out too small. This is an interesting extension of the work on the formation of the Moon and just goes to show you that even though we are pretty sure about the basics of moon formation, there's still plenty of work left to do in this field. Of course, this is true of nearly all fields in planetary science and science in general. 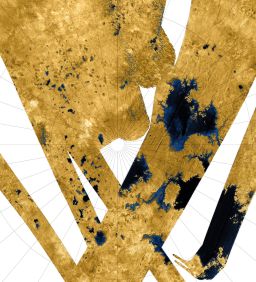 James Elliot, Jay Pasachoff, and others

On the night of July 10-11, the 6.5-meter Clay Telescope at Las Campanas Observatory in Chile spotted Pluto, Charon, and a faint star. This image was taken before the occultation event. Pluto (top) and the star (bottom) are visible; the star overwhelms the dim light from Charon.

So occultations won't work directly, but Elliot Young spoke about how the radius of Pluto could be teased out of information from the mutual events with Charon. Back in the late 1980s, Pluto and Charon passed in front of one another as viewed from Earth and also cast shadows on each other. Since we learned the precise radius of Charon in 2006 (from an occultation; Charon has a negligible atmosphere), combined with some of what we know from Pluto's atmosphere, we can go back to this old data and try to see if the radius of Pluto can be determined. He admitted that this method is fraught with potential errors, but did give a radius of 1,150 +/- 7 km as his current best guess (which I notice is ~20 km different than the abstract). I'm sure the New Horizons team would like to know exactly where to point their cameras, so hopefully his analysis works out.

nother unknown target for New Horizons' cameras are Nix and Hydra, the two small moons of Pluto discovered in 2005. Marc Buie and Dave Tholen talked about their recent observations of these moons. The results are somewhat preliminary, but they do feel like they know the orbits of all three moons pretty well. This is no trivial calculation since (by Newton's third law of actions and reactions) all four bodies are constantly gravitationally tugging on each of the others. Nix and Hydra are pretty small, so they don't affect Charon too much, but there seems to be a perceptible change in the orbits due to the presence of all four bodies. It appears that we'll definitely have good pointing information when New Horizons flies by.

inally, in the last session of the conference, we ventured past Pluto into the orbital structure of the Kuiper belt. The talks highlighted our current understanding of the number of KBOs on different kinds of orbits and clues on the formation of the Kuiper belt are starting to peek out. For example, it has been known for a while that there seems to be a difference between KBOs that orbit near the plane of the planets (less than about four degrees inclination, called "classical") and the KBOs that have larger orbital inclinations. Keith Noll did a survey using Hubble to look for KBO binaries: objects with moons. He clearly finds that the low-inclination objects have a much higher fraction of binaries than the higher-inclination objects. It is this kind of information that gets theorists thinking: what could cause such a big difference in two populations that are basically in the same place?

ne new theory about the formation of the Kuiper belt that appears to explain its architecture pretty well is the possiblitiy of a "rogue" planet. This study was presented by Patryk Lykawka and makes a big prediction: we'll discover a new planet soon. This planet would be about the size of Mars and would currently be on an orbit where it would have been pretty hard to find, but future surveys (like PanSTARRS) are likely to find this planet, if it exists. The planet originally formed between the giant planets, but got thrown out when they got big. It stayed in the Kuiper belt region for a while, stirring things up (for instance, creating the high-inclination objects) and then got thrown out to a relatively distant orbit (somewhere between Eris and Sedna). So, keep your eyes open in the next few years for the discovery of another "planet". (Planet X? Planet IX? The Large Dwarf Planet?) Note that there are other theories of the formation of the outer solar system that do an excellent job of explaining the facts, but do not require another planet (such as the "Nice" Model). This planet would be extremely cold all the time, in a great contrast to the vaporizingly-hot HD 149026b that I mentioned at the beginning.

ll in all, it was a nice conference. It's always fun to get together with other planetary scientists and talk about our exciting field!