I am sitting in an unbelievably packed (and clearly too small) meeting room at the Courtyard Marriott hotel in Pasadena along with what must be over 150 interested members of the Mars community for the second of three Mars Science Laboratory landing site selection meetings. Just as the landing site selection process was for the Mars Exploration Rovers (but not for Phoenix), this process has been thrown wide open to anyone in the community who is interested in helping to determine where Mars Science Laboratory should go. While many of the faces here are familiar to me from the Mars Exploration Rover mission, there are also a bunch of "outsiders," other members of the Mars community who are currently working on orbital missions, and many faces I've never seen before. 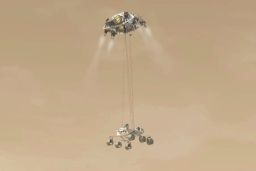 That won't make landing site selection any easier, especially since there is MUCH more data available to scientists now. From space, Mars Global Surveyor, Mars Odyssey, Mars Express, and especially Mars Reconnaissance Orbiter have provided high-resolution views of not only the geomorphology but also the chemistry of many, many exciting-looking spots on Mars. (I'll have more to say about the recent release of Mars Reconnaissance Orbiter CRISM data to support the site selection process later.)

Another challenge is that because the rover and its entry, descent, and landing system isn't built yet, the engineering constraints keep changing. This morning they have already announced two big problems that have led to recent changes in site constraints. First, they were trying to develop new actuators that employ a dry rather than a wet lubricant, which would permit the rover to be operated at lower temperatures than Spirit and Opportunity can tolerate. That development effort has ended in failure, so now they have temperature constraints, which I assume lead most directly to a more restricted range in altitude and latitude. (Note that because Mars' winters are longer in the southern hemisphere, you can go to higher northern latitudes than you can to southern latitudes.)

The other problem is that because MSL is big and heavy, they have found the material that they have used in the past for the heat shield, something called SLA-561V, is not going to work for this mission, and they're switching to something else called PICA. Attempting to use the original material was forcing them to go to slower, shallower entries and an unacceptably low-altitude engineering constraint (allowing a longer path through the atmosphere for landing); moving to the new PICA material will make life challenging for the engineers but will return most of the altitude range to the scientists trying to choose landing sites.

I'll be here all day today and again on Thursday, and I'll post notes as quickly as I can. Stay tuned!

To follow along, check out the MSL landing site information website, where they are supposed to be posting nearly all the presentations given at this meeting, and where they have links to all the data being collected by all the orbiting missions.