Congratulations are in order to Japan for the successful injection of Kaguya into its primary science orbit on October 19. As of October 20, they shifted out of the "critical phase" of their operations, and hey are now checking out the science instruments, and say they plan to start regular operations in December. There was a press conference on the same day, and, as usual, it was blogged by Shin-Ya Matsuura in Japanese and then translated quickly into English by volunteers at Jspace. Matsuura noted that the conference began with "the casual opening remark by Public Affairs Department 'these days we've been holding joyful press conferences with smiles.'" This joy is, of course, in contrast to the types of emotions that tend to accompany Hayabusa-related press conferences, which must be a mixture of sadness, frustration, and determination. It's about time JAXA got to hold "joyful" press conferences about planetary missions.

There are a lot of systems and instruments to check out. The project scientist, Susumu Sasaki, explained: "the first step will be checkout of the bus system and redundancy systems. For observation systems, first we will deploy the mast of the Lunar Magnetometer, deploy the antenna of the Lunar Radar Sounder, and operate the gimbal mounting of the Upper-atmosphere and Plasma Imager (UPI). Next we will start up the low-voltage system of 14 observation instruments, which will be completed by the mid November. Finally, we will start up the high-voltage system by gradually increasing the voltage over one month. But this is just a schedule and can be changed."

And, wrapping up the conference, project manager Yoshisada Takizawa is quoted as saying: "Now I just hope we can release proud data calmly to the world." This press conference was not accompanied by any new images from the HD camera, but there were more terrific ones from the onboard camera, including this one containing both the Moon and a tiny little Earth: 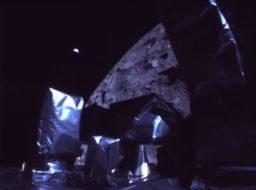 Kaguya, the Moon, and Earth

In other lunar news, only two days left until Chang'e launches! My correspondent Wang Chun did get his ticket to see the launch and is now in the middle of a two-night (yikes) train ride to Xichang to witness the event. I do not know whether he will be able to write to me from there, but I hope so!