Emily and The Planetary Society have graciously afforded me an opportunity to guest blog for a few days during the upcoming Dawn launch period. I hope to provide space enthusiasts worldwide with some unique views and experiences from behind the scenes while I am on site at the Kennedy Space Center launch facilities at Cape Canaveral.

After numerous delays this past June and July due to weather and logistics (see Marc Rayman's earlier entry for complete details) Dawn stands at the ready and is on schedule to launch from Pad 17-B on Wednesday, September 26. The launch window is open from 7:25 AM to 7:54 a.m. EDT (11:25 to 11:54 UTC).

Dawn will streak into space on over one million pounds of thrust on a Delta II Heavy (technically a Delta II 7925H-9.5), the most powerful version of the launch vehicle, which features nine extended Solid Rocket Boosters (SRBs). A Delta II Heavy launched the Opportunity Rover towards Mars in 2003 and has more liftoff thrust than an Atlas Centaur. The venerable Delta II is extremely reliable, holding the current record of 75 consecutive successful launches, most recently on September 18.

Last Thursday, September 20, after two days of delay due to extremely bad weather (which threatened to postpone the launch yet again), the two-piece payload fairing was installed around the spacecraft on top of the Delta 2 rocket. The fairing plays a crucial role in protecting the spacecraft from extremely high temperatures and atmospheric friction during ascent. When the rocket is sufficiently high into the atmosphere that friction is no longer of concern, the fairing breaks away. For a dramatic illustration, check out the Dan Maas animation of the Mars Rover launch which is available online.

Based on the latest weather reports and technical readiness of the spacecraft and Delta II launch vehicle, everything is currently "go" for second stage fueling on Sunday. This is the closest Dawn has come to actually launching, a milestone greeted with great relief by the entire team. But there is not a second to rest, as the final Mission Dress Rehearsal at the Jet Propulsion Laboratory (JPL) is set for Saturday and intensive pre-launch preparations for vehicle and spacecraft continue straight through to launch day. Sixteen hours prior to launch, JPL managers will load the final commands and files onto Dawn, to properly configure all spacecraft systems such as the computer, guidance, battery, etc.

In my upcoming reports, I'll be reporting directly from the pre-launch press conference on Monday, September 24, and from inside KSC throughout launch week as we await the beginning of a journey to the earliest epochs of our Solar System. 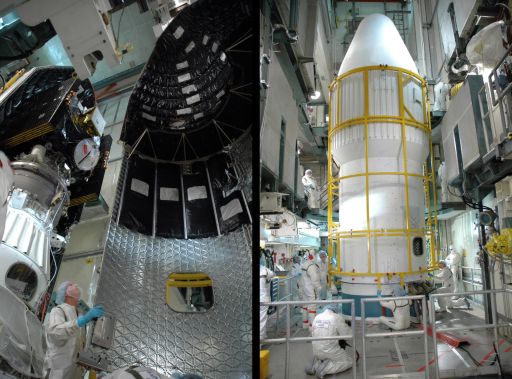 Closing the fairing around Dawn