As I write this blog entry, Cassini has already passed its closest approach to Iapetus on its one and only encounter with the yin-yang moon. We won't know for a while yet if its observations were successful, but orbital mechanics dictates that Cassini was in the right place at the right time to take the greatest ever pictures of this really bizarre-looking moon.

I stayed up late last night to see what pictures would come down from the spacecraft, and checked the website first thing this morning, and Cassini has already returned the highest-resolution-ever images of the moon, surpassing its best pictures from December 31, 2004. But before I get into the pictures, I wanted to post for you a list of all the best places to go to find out information about this flyby:

So let's get to the images. Yesterday I posted five growing crescents. Late last night, they posted the last crescent image that fit entirely within one narrow-angle camera field of view. Today I woke up to find the images for a color view of Iapetus' crescent that was close enough -- taken from only 70,000 kilometers away -- to require four separate frames to cover the entire crescent. Cool!

This view is composed of sixteen Cassini images, four frames taken through clear, ultraviolet, green, and infrared filters. It was taken on September 10, 2007 at 04:20 UTC, 10 hours before the closest approach on Cassini's flyby of the moon. The view shows Iapetus' leading hemisphere, which is covered with the dark-stained surface known as Cassini Regio. Only the region near the north pole appears bright icy white (to the right of this image). A band of mountains marking Iapetus' equator pokes above the limb at the center.

There was another difficulty presented by this set of images. For this observation, according to Tilmann Denk's website, the ultraviolet-filter images had to be exposed for fully 26 seconds, more than 10 times longer than the other frames. Now, ordinarily, exposures of 26 seconds would present no problem at all for Cassini, which is a legendarily steady camera platform. Cassini can track moving objects with tremendous accuracy, so that as it flies past a fast-moving moon it can make a very sharp image of the moon even as the background of stars or Saturn streak across. However, excellent tracking doesn't help you if you are flying straight toward the object you are tracking. If the object is growing in your field of view, and you track an object in the center of your field of view, everything toward the edge of your field of view is going to move farther toward the edges during the exposure, introducing radial smear. As a result, the ultraviolet images were quite blurry (example), and when I tried to merge them with the green and infrared to create color pixtures, I got funky blue fringes all over the image. I dealt with the problem by stacking the ultraviolet images with the clear-filter images. This "leaks" some information from longer wavelengths into the blue-filter images, but something had to be done to cope with the smear.

Having assembled the sixteen images into four color frames, I then had to puzzle-piece them together. It is very easy to get the craters and stuff to line up in such a high-phase crescent image, because there's very little area of actual overlap between the frames. The real challenge for assembling the color images together was getting the color to flow seamlessly from frame to frame. Iapetus' bright terrain (visible at the extreme right of the image) reflects 60% of the light that strikes it, while the dark terrain (which covers most of the rest of the picture) reflects only four percent of the light that strikes it -- it's 15 times darker. When the images are posted on JPL's website, their contrast is automatically stretched, which is a good thing, as it shows you all the lovely detail available in each image. But the automatic contrast stretching makes it very, very hard to match up multiple frames in an image of Iapetus, because a frame containing only dark material in its field of view will have been stretched much, much more than a frame containing only bright material. A lot of fudging was involved in making the color match across these frames, but I eventually got it to work and am pretty pleased with the result. It shows you Iapetus at a resolution of better than 500 meters per pixel.

Sometimes I get lost in the challenge of assembling pictures and forget to actually examine what I'm looking at. But these pictures reward close examination, especially the ones covering the equatorial mountain range. Here's the view covering the mountain range (still a color view, but with the contrast stretched much more to bring out detail): 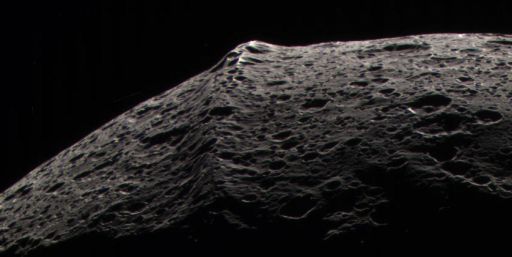 Iapetus has a mountain range exactly on its equator, measuring in some places 13 kilometers tall and 20 kilometers wide. This image was taken on September 10, 2007.

It's hard to know whether the extreme foreshortening of this image is deceiving my eyes, but every time I look at it, my eyes snap to what look like chains of craters that run roughly parallel to the equatorial mountain ridge -- I see two such chains spaced very closely together to the right (north) of the ridge, about halfway from the ridge to the edge of the photo. I'm not at all convinced that that's real; it may just be an optical illusion.

What do you see in the images? There are a lot more than I have time to treat here, including some lovely (if dark) ones taken by the light reflected from Saturn, and a huge portrait of Saturn and all of its other large moons. Check them out and follow along with Cassini's adventure!