Well, I had intended to spend today preparing a post on the upcoming Iapetus flyby, but I got sidetracked because of an absolutely beautiful set of images that Cassini returned from the Rhea flyby that happened on August 30. During the encounter, Cassini's narrow-angle camera snapped 11 pictures of Rhea in a crescent phase, the ingredients for a 5,000-pixel-wide mosaic on the moon. How could I resist putting such a puzzle together? 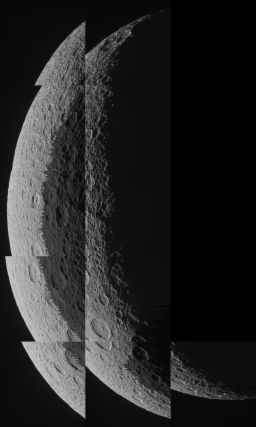 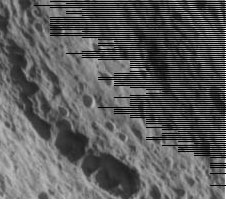 The every-other-line truncation in some Cassini images happens when the images are compressed using the onboard "LOSSLESS" compression scheme (which is obviously a bit of a misnomer, since it can and does lose spatial information). The algorithm is a variant of a Huffman encoder. It operates on pairs of lines and guarantees that the compressed image will be no more than half the size of the original image. If the encoder figures out that the two lines it is processing will be compressed more poorly than a 2:1 ratio, the encoder simply stops and truncates the rest of the second line. In an absolute worst-case scenario, the entire second line could be truncated. The algorithm was chosen because it is computationally inexpensive and because it is easy to predict how much space (no more than half the original image size) the compressed frames will take up on Cassini's solid-state recorders.
(Thanks to Gordan Ugarkovic for this explanation.)
There is a variety of ways to solve the every-other-line truncation problem, some of them more difficult than others. The easiest, for me anyway, is a filter in Photoshop called De-Interlace. Just select the area that's affected by the every-other-line truncation, then go to Filter > Video > De-Interlace, and boom! problem solved.

The De-Interlace filter in Photoshop can repair Cassini images that are affected by every-other-line truncation.
So now we can start putting the pieces together. Here's what I got at the start of the assembly process. 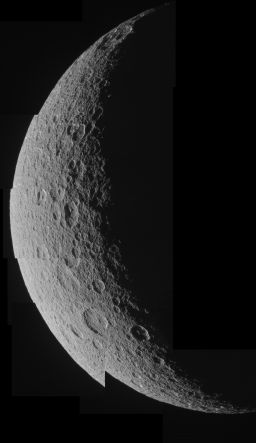 Cassini took this mosaic starting at the lower right corner. It then moved left one frame, taking five frames up Rhea's terminator (the day/night boundary). Then it moved to the left one more frame, taking five frames going back down along Rhea's limb. Images match okay from one frame to the next in the sequence, but the mismatch gets pretty bad between the second and eleventh frames in the series at the bottom edge of the image. THe mismatch is so bad because as Cassini was taking these images, it was flying toward Rhea and also past it a little bit. This causes two problems: the scale doesn't match from image to image (as Cassini flies toward Rhea, the camera's fixed field of view covers a smaller and smaller footprint on the surface), and each successive image peeks over a little bit more of the limb (which causes features near the limb to stretch and grow from one image to the next).

What you have to do is to resize each of the frames a little bit, stretching them, and, for the ones at the bottom edge, rotating them a bit to get them to line up. In Photoshop, just press Control-T (or go to Image > Transform) and you'll get some handles on each layer to stretch and rotate it with. Here's what I get after that step: 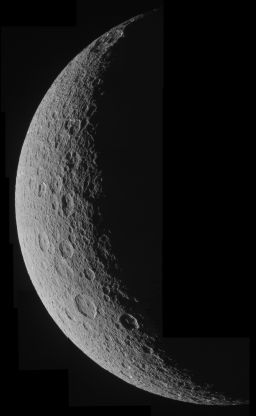 The imaging team can do these "transformations," as they're called, much more exactly, because they have very precise knowledge of the position and orientation of the spacecraft and the target body in space when each image was taken. Without that information, you just have to move, stretch, and rotate the pieces by eye until they match up. It's not a product you can use for scientific research (such as counting craters to figure out ages), but it's pretty!

Not quite pretty enough, though. There is still a small amount of mismatch between tile edges. You can make that less obvious by feathering the edges of each frame. I do this by using the Eraser tool with a large soft paintbrush on each frame, only touching up the areas where each frame overlaps one below it. Here's what I get after that step: 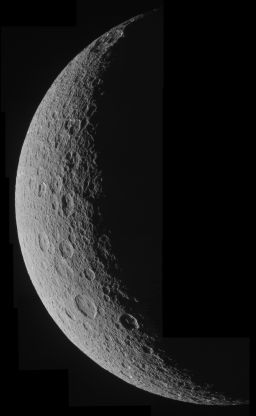 Still, some more beautification is necessary. Shadowed parts of the moon aren't quite black enough for my taste. So next I'll adjust the levels of the image (Image > Adjustments > Levels) and make all the darkest pixels black. 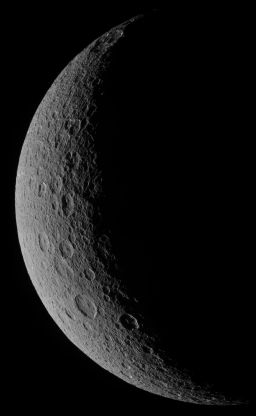 Finally, I'll mess with the levels a little bit more to bring out some detail in the Sunlit areas, and rotate it so it fits better on a computer screen. Voilà! A beautiful image of Rhea. 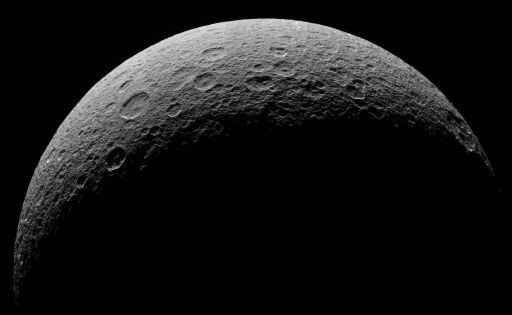 Cassini took this image of Rhea in a crescent phase on August 30, 2007 from a distance averaging about 60,000 kilometers. There are a total of eleven frames in this mosaic, which was composed of raw images.
Tomorrow, Iapetus!