Just another paper in another session at Europlanet, not even a long presentation at 15 minutes, and not in the main conference hall. I counted just 27 people in the room - but apart from the stunning Uranus ring crossing images, it's probably the paper that will get the most media coverage. I'm going to tell you what was in his talk, tell you about the questions and answers, and give some closing thoughts. Sit down, get comfy, here we go

Firstly - take a look at the abstract - it's probably the most verbose and detailed of the whole conference PDF link Also - media reports that described the work of Joop and Dirk as being non-peer reviewed are not true. They have a paper in the International Journal of Astrobiology (recieved November 2006, accepted March 2007) I know - because I have a copy in front of me.

Here's what Joop had to say. The hypothesis is fairly speculative, and is less about what he thinks is on Mars, and more about what might be on Mars. The issue with going and looking for life on Mars is that it takes many years for one instrument's discovery to then be interpreted, a new mission designed, and the follow-on to occur. What they've done with this research is try to figure out one way in which the presence of biological material on the surface could explain the Viking results. 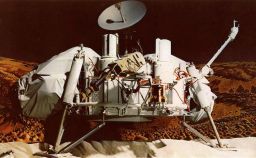