If Monday morning at the Workshop on Satellites of the Outer Solar System was all about stuff we can't measure (the interiors and pasts of the moons), Tuesday morning was all about stuff we can measure, but don't always know how to interpret. The talks were all about the surfaces of these bodies as revealed through spectroscopy. Spectroscopy is a discipline that uses the entire electromagnetic spectrum, from UV to visible to near-, mid-, and thermal infrared and sometimes even more extremely short or long wavelengths, to study the properties of surfaces in space. Stuff reflects sunlight or emits thermal radiation differently depending upon what it's made of, so by studying the radiation that we can sense remotely from these objects, we can learn about what they are made of. The major problem in spectroscopy is that you rarely see surfaces that are made of only one substance, so the spectrum that you look at represents the sum of all the different kinds of materials that make up the body you're looking at, and decoding what all the lumps and dips in a spectrum mean is a seriously difficult challenge.

Electromagnetic radiation is divided into categories depending upon its wavelength. Gamma rays are the shortest, and radio the longest.

"What is out there?" Brad asked himself. "Lots of water. Water in the solid state. Water is virtually everywhere." However, even if water ice is everywhere, it takes a wide variety of forms. There is more than one crystalline form, depending on the pressure and temperature; it can be crystalline or amorphous; even amorphous ice looks different depending upon how it formed (vapor-deposited amorphous ice looks different from ice whose crystalline structure has been loused up by radiation). There is also bound water, where water is found in the crystalline structure of hydrated minerals or clathrates, and trapped water, where it's adsorbed or even "physisorbed" on other materials.

Brad continued, "There are all kinds of things you can do with water, and it's still water. It responds to different environmental conditions. It changes with temperature, pressure, radiation damage. It forms pits and cages, the structure gets blown apart, it sputters and gets redeposited and gets knocked around and knocked around until it preferentially deposits itself on the coldest surfaces. Frost grains will start changing on their own. You can put water ice in a vacuum chamber and hold it there and water molecules will come off the edges and redeposit on the faces. Water ice flows; you get viscous relaxation. Craters, mountains slowly flow and change their shape. What you get depends very much on the rheological properties of these ices." Experimenters are attempting to model the behavior of water at outer solar system conditions in the laboratory, but even when people manage to simulate the pressures and temperatures in the outer solar system, they can't possibly model the diversity of compositions of impurities in water ice. "Everyone's modeling with pure water ice, but with just a little bit of contaminant, less than 1%, you can change these behaviors by orders of magnitude."

"What else is out there? There are elements in cosmogenic abundances. Volatiles are some of the easiest things to detect. There's minerals, either primordial or alteration products, and then the organics, which is what everyone's looking for, whether abiotic or biogenic. Biogenic organics -- that's the holy grail for spectroscopy."

He then went through the Jupiter, Saturn, Uranus, Neptune, and Pluto systems and discussed what kinds of materials have been detected to date in each place, which I won't go in to here. It's a pretty impressive list, though, of substances that we have detected in places that (with the exception of Titan) we have never been able to sample in situ. All of these detections are based upon remote sensing. You don't even need spacecraft to detect many of these materials; a lot of spectroscopic studies can be performed from Earth. What spacecraft are necessary for is to map the materials, where they appear on different parts of the moons, and link that information with their geologic history. Brad pointed out at the end that the vast majority of the detected materials are fairly simple chemically -- not many of them contain more than three atoms per molecule. Processes such as radiolysis and photolysis appear to break down more complicated compounds faster than they can form or be exposed on the surface. You only get more complicated compounds where conditions shield chemical activity from the Sun's radiation and from the giant planets' magnetic fields.

However, it's important to note that the way that spectroscopists detect substances is to compare the squiggly lines of spectra with a library of pure materials (or at least materials of well-characterized composition and structure) measured in the laboratory. We can only detect what we have predicted and measured in the laboratory. Brad concluded by saying that there is enough laboratory work left, developing spectral libraries of outer solar system substances at cryogenic temperatures, to keep five research groups busy for decades.

I took many fewer notes on the other talks in this session, because, while they were interesting progress reports on the status of the detections of materials in the outer solar system, they were I think a bit too much in the level of details to be of general interest. So here are just a few items. Rachel Mastrapa gave a talk on "Near Infrared Spectra of Pure Ices and Mixtures Relevant to Icy Satellites," discussing the status of some of that lab work that Brad was referring to. Early in her talk she showed this graph comparing laboratory spectra for two samples of pure water ice in different crystalline states: 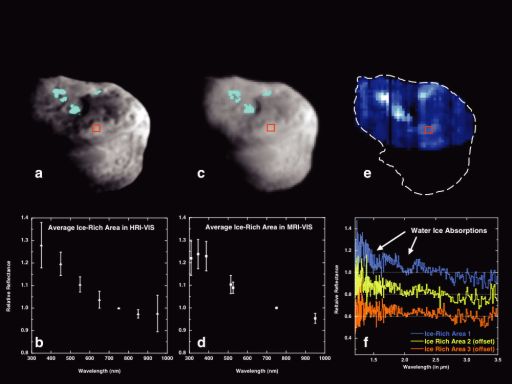 Maps and spectra of ice-rich areas on comet Tempel 1

Deep Impact studied Tempel 1 prior to the impact and took both images and spectrometric measurements of the nucleus. Images (a) and (c) are high-resolution and medium-resolution images of the nucleus. The light blue highlighted areas are places where a ratio of images in blue and red wavelengths showed a notably blue part of the surface. Graphs (b) and (d) are crude spectra of those spots, as seen through each of the camera filters. Fortunately, Deep Impact also carried a spectrometer that could scan across the surface of Tempel 1 (e) and produce much more detailed spectra (f). The spectra shown in (f) are normalized by the spectrum of a smooth, non-blue area (outlined by a red square) to make it easier to discern the characteristic spectral features of water ice absorptions.

Dale Cruikshank gave a presentation on "Carbon Dioxide on the Satellites of Saturn." What was notable from his talk was the conclusion that the funny things about some of the spectra they measure may not be due to weird substances interplaying in weird ways, but instead due to instrument calibration problems. Cruikshank explained that he found, in data from the Cassini VIMS instrument, that there is a strong spectral signature of carbon dioxide ice in the dark stuff on the surfaces of Phoebe and Hyperion. However, the wavelength of those spectral signatures seems to be slightly off. This could mean something funny about the carbon dioxide -- maybe it is chemically complexed with some other material -- but Cruikshank said that they eventually went back to their instrument and decided that maybe the instrument's calibration was a little bit off, meaning that at least in one small region of the spectrum, each channel of their instrument was measuring a slightly different slice of the electromagnetic spectrum than they originally thought it was. They re-examined the calibration data, adjusted 13 of their channels by amounts up to ± 0.010 microns, and found a better agreement between the measured spectra and what they expected. Apparently it is incredibly difficult to calibrate spaceborne spectrometers.

Skipping down several talks, Carl Hibbits gave one titled "Physisorption: Trapping Volatiles in the Surfaces of Icy Satellites." The word "physisorption" was new on me, and it appears it may have been new to at least some of the audience too. Carl's talk was specifically concerned with carbon dioxide, the same ice that has had the VIMS team scratching their heads. "We are looking at whether carbon dioxide is not in ice but instead is in non-ice materials," that is, minerals. "We are looking at the possibility of a general mechanism for trapping carbon dioxide in the surfaces of satellites throughout the outer solar system.

"Carbon dioxide has been detected on Ganymede, Europa, Callisto, Hyperion, Enceladus, Iapetus, Phoebe, and Dione. In all these cases, the surfaces are too warm for carbon dioxide to exist as ice for a long time; so it must somehow be bound to the surface. It quickly sublimes at temperatures above 80 Kelvin." So Carl is proposing physisorption, which he defined as "a van der Waals force that bonds volatiles to a surface," and said that it's the same force that geckoes use to climb walls and walk on ceilings. The problem is that for physisorption to work, as far as physicists understand it, some atmospheric pressure is required, but the surfaces of the icy moons are all exposed to a vacuum. "We postulate that at very cold temperatures, van der Waals forces are stronger than kinetic energy." I have no ability to evaluate the likelihood of this hypothesis, but it's another example of the mental gymnastics spectroscopists have to do to explain the positions of the wiggles and bumps they see in real-solar-system spectra.

That was it for the spectroscopists. The same session had another talk on "goo-ology," but I'll save that for its own post...