Over the last week or so, ESA, NASA, and the Applied Physics Laboratory have released some preliminary images from ESA's Venus Express and NASA/APL's MESSENGER missions, which performed simultaneous observations of Venus on June 5. Venus Express has been doing science operations there for more than a year, while MESSENGER was just passing through on its way to its first flyby of Mercury in January. (This sounds like a long way off, but it's not much more than four months away, and coming up quickly!)

The two sets of observations will eventually be used by both science teams, working together, to enrich our understanding of Venus. In the short term, though, what the two sets of observations really do is to illustrate how much more Venus Express "sees" at Venus than MESSENGER does. It's not at all a fair comparison -- Venus Express' instruments were designed to penetrate Venus' many layers of clouds, while MESSENGER's were designed to stare at rocks with no interference from any pesky atmosphere. It just serves to show how, when engineers build a spacecraft, they really need to already know quite a bit about the properties of their spacecraft's target in order to design instruments that can perform well.

Anyway, getting back to Venus, here's a nifty little movie that APL posted yesterday, illustrating MESSENGER's departure from Venus. I include information in the caption as it appears on the APL website, although I am virtually certain that the distance information is not correct. (Judging by the amount that the apparent size of Venus changes, it seems that MESSENGER must have been roughly 10 times closer to Venus at the start of the sequence than it was at the end.) I'll change it here if and when APL changes it on their site.

Onward to the innermost planet

After MESSENGER sped by Venus for the second time on June 5, 2007, it looked back to take 50 photos of the cloudy planet diminishing in size to the rear. MESSENGER's camera was not designed to be able to see through Venus' thick cloud cover, so the globe appears nearly featureless. The probe was 60,688 kilometers (37,710 miles) from the planet at the start of the sequence and 89,310 kilometers (55,495 miles) at the end. Initially, images were acquired at a rate of one every 20 minutes, and then as Mercury shrank the timing interval was increased to 60 minutes. These images represent the last view of Venus by MESSENGER.

Venus Express saw a lot more during the encounter. There was a bit of finesse involved in doing "simultaneous" observations. Venus Express was not in the right part of its orbit to perform useful observations of MESSENGER's closest approach point at the same time that MESSENGER was observing -- in fact, it was below MESSENGER's horizon. So the Venus Express team split their plans into two observation types. First, they considered the location over which MESSENGER would be passing, then calculated backward to predict where the clouds over that site would have come from, 12 hours earlier, then photographed those clouds. They also observed the actual close approach point some time after MESSENGER passed by. Here's one image from that observation, which does show lots of details in clouds at an elevation about 30 kilometers above the surface: 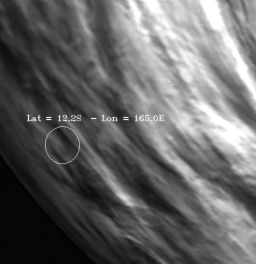 MESSENGER passed by Venus on June 5, 2007. Its closest approach was to a point on the night side of the planet, shown here outlined with a circle. Venus Express observed the same area a few hours later, producing this image of thermal radiation emanating from Venus' warm lower atmosphere; the radiation silhouettes dark clouds at altitudes of about 30 kilometers. The south pole is off the image to the upper right; the banded clouds are roughly parallel to lines of latitude. 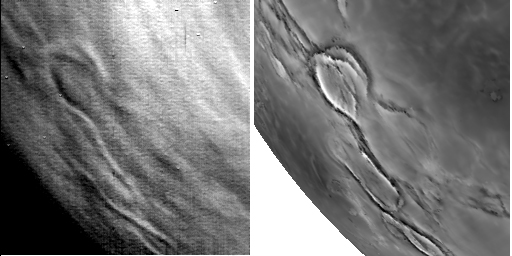 The left image of this pair was acquired by the Venus Express VIRTIS instrument on June 5, 2007. It is pointed at the area over which the MESSENGER Mercury spacecraft made its closest approach to the planet. The image was taken at a wavelength of 1 micron and reveals infrared radiation from the surface of the planet. The image on the right is a simulated view of the same area, made from Magellan radar data. The elliptical feature at the center of the image is Atahensik Corona, and the longest linear feature slanting from upper left to lower right is Dali Chasma. The south pole is off the image to the upper right.