We've just begun a new series of reports in the Planetary Analogs section of our website, and I'm really excited about it. Astronomer and physics professor Tyler Nordgren, who was one of the original team of people who developed the Marsdial for the Mars Exploration Rovers, has come up with one of the best ideas for a sabbatical year I've ever heard. He's going to spend the next year exploring a dozen of America's national parks, doing public lectures and working with park rangers to make connections between the amazing landscapes of the parks and the skies above them. The simplest connection that you can make is simply to encourage people to look up. Not that many visitors need much encouragement -- in a national park, the night sky is breathtaking. For those of us who live in light-polluted cities, it's only when we travel to parklands that we can see the night sky blazing with stars. Tyler will eventually write a book based upon his travels, but in the meantime he's going to be returning blog entries that I'll post here.

I have an abiding love for America's national parks. It began when I was a kid and my father packed my brother and me into our van for weeks-long road trips into the American west. We visited parks, caves, anthropological sites, and mining towns both bustling and defunct, crawling our way around back roads, on one trip keeping as close as we could to the Continental Divide all the way from New Mexico in the south to Washington in the Pacific northwest. Later I enjoyed several summers at a camp on the edge of Rocky Mountain National Park, hiking and riding among the pines and aspens and granite peaks. Studying geology allowed me to continue to explore, and now, through the eyes of robots, I'm continuing to explore these beautiful landscapes on other planets. I'm jealous of Tyler for spending a whole year exploring these breathtaking sites, and I can't wait for his further reports and pictures.

Tyler's first blog entry comes after a trip to Denali National Park and Chugach National Forest in Alaska, where he looks for what's left of a glacier and misses the Moon behind Denali. For background, you can read about Tyler, see the list of parks he'll be visiting, and read Tyler's introduction to the project. 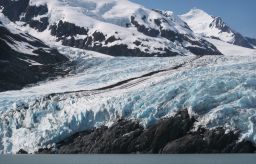 Receding from the Lake

The terminus of Portage Glacier has finally begun to recede from the lake it formed. Numerous streams of water cascade down the rock face as nearly 20 hours of sunlight warm the newly exposed dark rock.